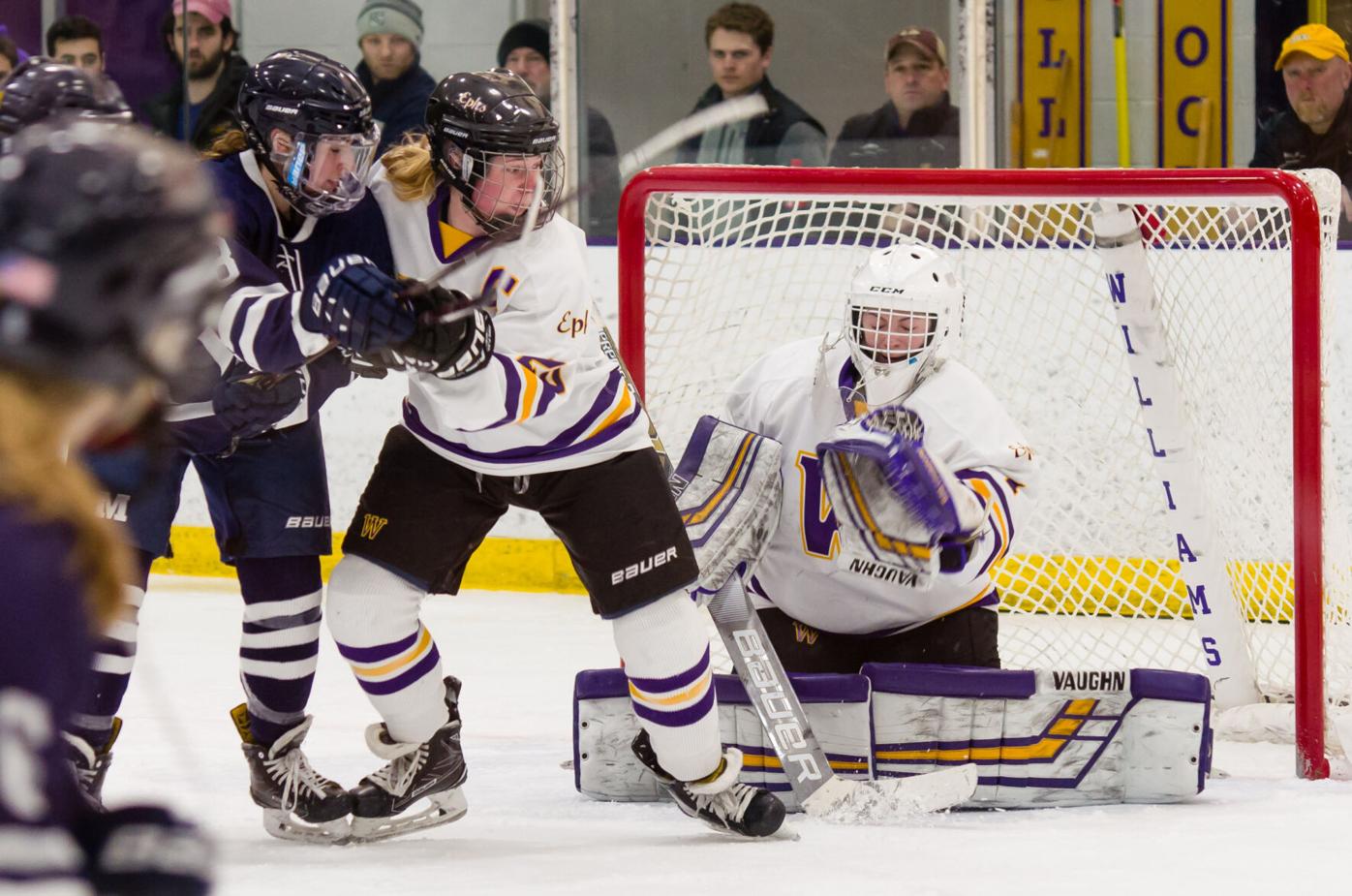 Williams College goalie Chloe Heiting is back for her senior year on the women's hockey team. The Ephs open their 2021-22 season Friday night at home against Colby. 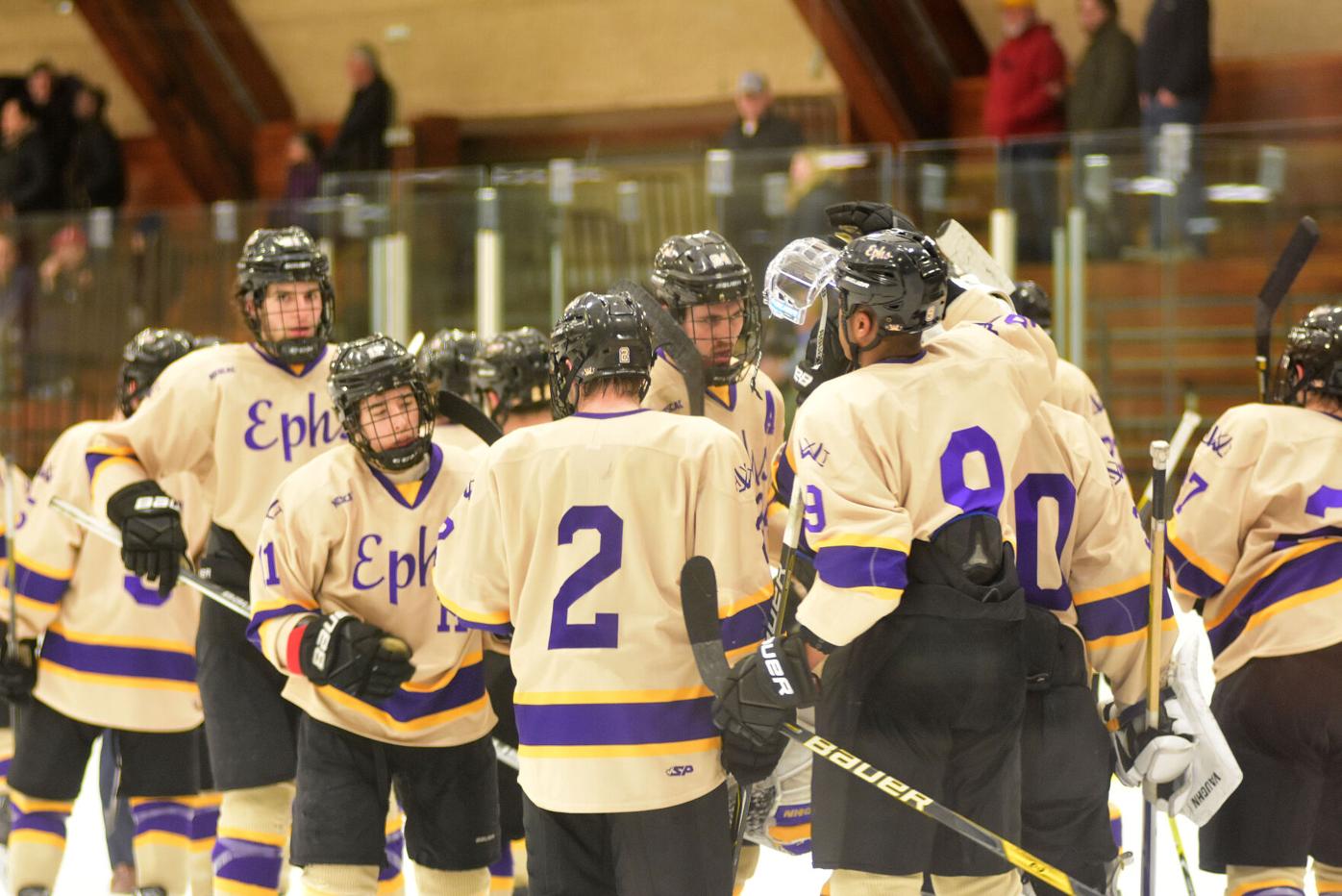 The Williams College men's hockey team opens the season with a trip to Maine this weekend. The Ephs will play at Colby and Bowdoin, before opening their home season Nov. 27 against SUNY-Oswego.

Williams College goalie Chloe Heiting is back for her senior year on the women's hockey team. The Ephs open their 2021-22 season Friday night at home against Colby.

The Williams College men's hockey team opens the season with a trip to Maine this weekend. The Ephs will play at Colby and Bowdoin, before opening their home season Nov. 27 against SUNY-Oswego.

WILLIAMSTOWN — Williams College hockey coaches Bill Kangas and Meghan Gillis would have been well within their rights if they had handed out “Hello, my name is.....” stickers on the first day of practice.

After all, there are 28 new faces on their respective rosters as the Williams teams hit the ice Friday night for the first time in two years. Sixteen of the new faces are skating for Kangas’ team, while the other 12 will play for Gillis’ crew.

The Williams men were 17-8-1 in 2019-20, 13-5-0 in NESCAC, a record that earned the Ephs the No. 1 seed and home ice in the NESCAC Tournament. After beating eighth-seeded Connecticut College 3-2 in the quarterfinals, Williams faced No. 5 Wesleyan in the semifinals. Goals by Bobby Beniers and Mac Carso in the final five minutes sent the game into overtime. Wesleyan’s Jake LaChance’s goal at 4:40 of overtime gave the Cardinals a 3-2 win. Wesleyan went on to win the NESCAC tourney title.

The Eph women finished 12-9-4 and were 8-6-2 in NESCAC play. Williams dropped a quarterfinal decision to Hamilton by a 4-3 score to end their season earlier than the Ephs might have wanted. Twelve months earlier, Williams had won the NESCAC Tournament and the automatic berth in the NCAA Division III Tournament.

The Williams women will open their season with a pair of home games against NESCAC rival Colby. Friday’s game will start at 7 p.m., and Saturday’s game will begin at 3.

The men will make an excursion to Maine for the weekend. Williams will play Friday night at Colby, with a 7 p.m. face-off time. On Saturday, the Ephs will travel to Bowdoin for a 4 p.m. start.

Williams won’t open at home until Thanksgiving weekend, when Kangas’ squad will host SUNY-Oswego with games on Saturday at 7 p.m. and Sunday at 3.

“It’s exciting to finally be on the ice with the guys,” Kangas said in a release. “We want to stay in the present and not look too forward.”

Early on, the returning goalie pair will have to be strong, because the Ephs will have to find some secondary scoring. Nico Karamanis, a second-team, All-NESCAC pick back in 2019-20, is the only one of the top four scorers returning. Karamanis was the top goal scorer two years ago, netting 12 with four game-winning tallies. Senior Nick Atmann and junior Mac Carso were two of three Williams players to score 11 goals, and they return.

Defenseman Jack McCool was the leading scorer in the 19-20 season, with two goals and 21 assists. That blue line presence will be missed,as will veterans Myles Cunningham, Daniel Wolfenden and Peter Christie.

Junior Connor Kucharski and senior Aaron Pinto are experienced blueliners. Kangas has six other defensemen listed on the roster. While four of them are listed as sophomores, when Jack Simon, Ben Lawrick, Faisal Alsaif, and Ethan Prout take the ice, it will be their first varsity action.

The Williams men will play away this weekend, and then have the next six contests at home. That includes a Dec. 11 game against Little Three rival Amherst.

The Ephs are also ticketed to play in the Northfield Savings Bank Tournament at Norwich against the University of New England. The other game features Norwich and Hamilton.

It all starts with Meghan Halloran. The senior forward from Darien, Conn., was the 2019 NESCAC Player of the Year and was a first-team, All-NESCAC pick in 2020. She played in all 25 games, and led the Ephs with 14 goals and 25 points. She was an ace on the power play with a team-best five goals. Junior Maddie Tix had four goals and led the Ephs with 14 assists as a first-year. Junior Kelly McCarthy had four game-winning goals in her first season two years ago.

The Williams blue line is loaded with senior Brynn Puppe, along with juniors Paige Galle and Delaney Szleyngier all back to anchor the defense. Szlezyngier had five goals and Galle had 10 assists, both tops among the defense. One of the defensive newcomers is sophomore Christina Halloran. Yes, that is Meghan Halloran’s younger sister.

Chloe Heiting returns in goal. The senior had a 1.62 goals-against average, a .939 save percentage, and she had three shutouts. The other two goalies are first years, as Sofia DaSilva and Amanda Lackmann will make their debuts this year.

There are nine seniors, four juniors, five sophomores and seven first years on the Williams roster. Five of the seniors came back to play one more season for the Ephs.

“We have a really deep and talented team,” Gillis said. “If we are working really hard at practice each day, that will allow us to be ready for conference and non-conference play.”