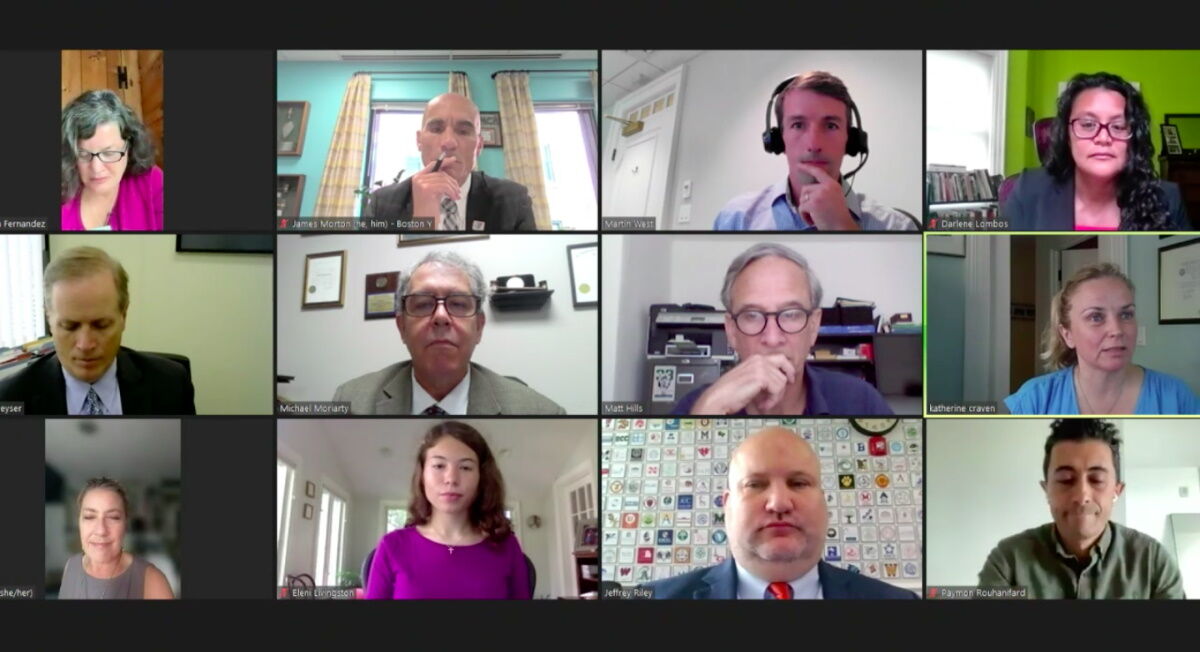 The Board of Elementary and Secondary Education convened virtually Tuesday for a vote authorizing Commissioner Jeff Riley to issue a mask mandate for K-12 schools. 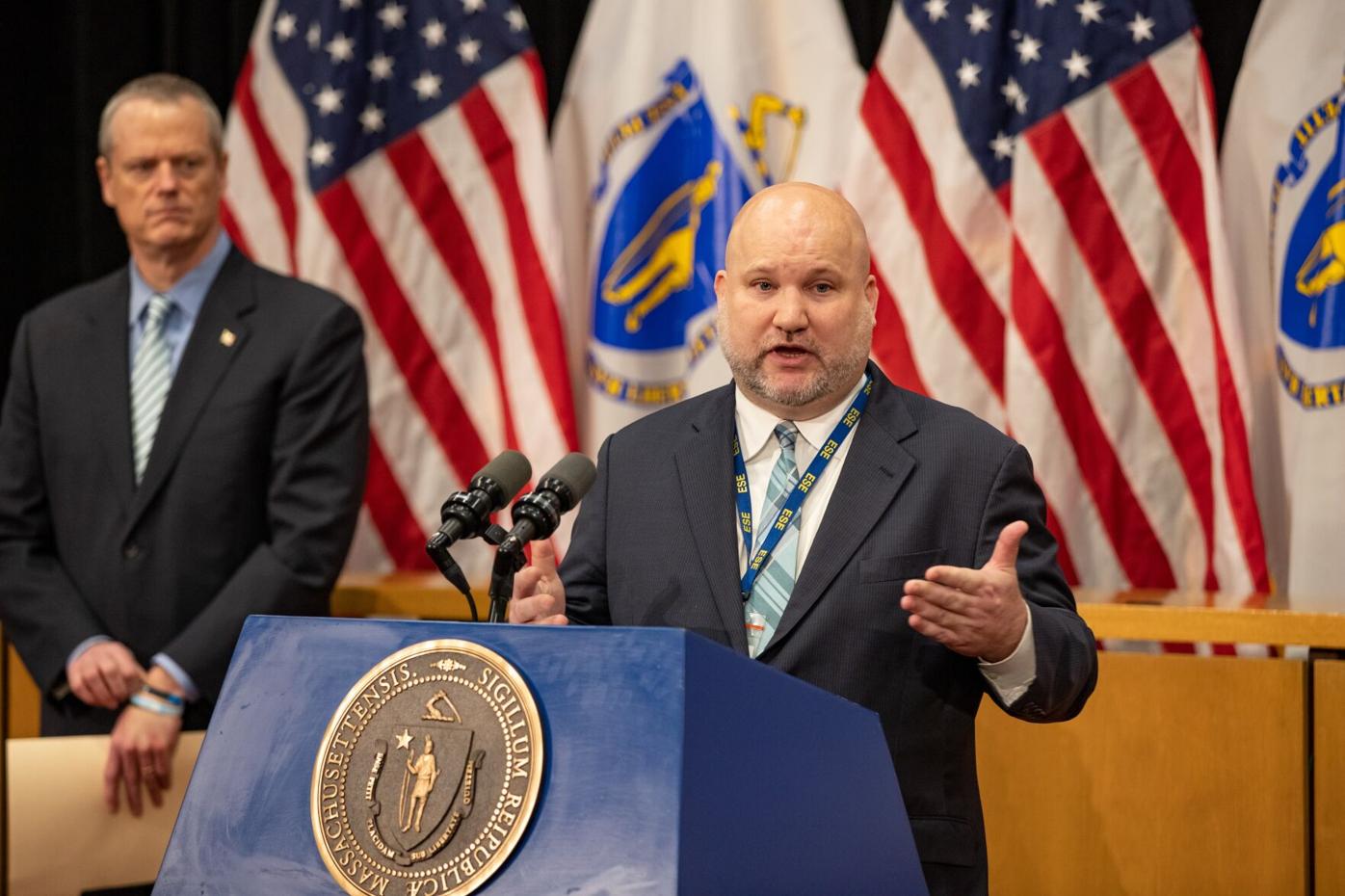 The Board of Elementary and Secondary Education has given Commissioner Jeff Riley the authority to mandate masks in K-12 schools for the imminent start of the third academic year influenced by the COVID-19 pandemic.

Massachusetts is poised to start its third pandemic-influenced academic year with a mask mandate in place across K-12 schools, after a 9-1 vote Tuesday by the Board of Elementary and Secondary Education.

Education Commissioner Jeff Riley said the mandate he plans to impose will require all students and staff to wear masks indoors through Oct. 1. After that date, Riley said, his department will “begin to look for off-ramps on masking in schools.”

“I want to be clear that we are hopeful that this will be a short-term measure, and we continue to work with the health and medical community on off-ramps for masking,” Riley said ahead of the vote.

He said he could not rule out the possibility that masks “may be required intermittently throughout the year” based on the path the virus takes.

Under Riley’s plan, starting in October, middle and high schools where at least 80 percent of students and staff have been vaccinated against COVID-19 would be able to lift the mask requirement, for vaccinated individuals only.

The mandate will apply to students age 5 and up, and education officials have said it will include exceptions for students who cannot wear masks because of medical conditions or behavioral needs.

Education Secretary James Peyser said the policy would both ensure “that we have a smooth opening of school without any confusion or ambiguity about the health protocols that everyone is expected to follow” and “reinforce the importance of vaccinations.”

“Obviously, circumstances may change in the coming weeks, which may allow us to take a different course as the commissioner said, but for now the safest and simplest path forward is to mask up in schools as we all work to meet or exceed the 80 percent vaccination benchmark that we’re talking about,” Peyser said.

While it’s unclear how school district officials will gather the information, Riley told board members in a memo that the Department of Elementary and Secondary Education would provide schools with an attestation form they could submit to demonstrate they met the 80 percent threshold.

A shift from the Baker administration’s previous approach, the board’s vote comes after dozens of school committees, boards of health and other local officials across the state had already decided to require masks in their schools, often following lengthy debates at the local level.

Over the past month, more than 100 districts have put policies in place requiring universal masking when school starts, according to a list compiled by the Massachusetts Association of School Committees. With a combined enrollment of about 454,000, those districts serve half the state’s students.

State education and health officials had previously issued what Gov. Charlie Baker called a “strong recommendation” that students in kindergarten through sixth grade — as well as older students and adults who are unvaccinated — wear masks indoors. That recommendation did not require districts to adopt any particular policy, and Baker had said he believes local officials are best suited to make the calls for their communities.

On Friday, after the Department of Elementary and Secondary Education announced Riley would seek to impose a mask mandate, Baker characterized that move as “appropriate” and said “an ongoing conversation” about back-to-school among state and local officials has been “evolving for the past month or so.”

“I think the commissioner felt this would give everybody sort of what I would describe as a common place to start the year, as well as some pretty heavy incentives for those who can get vaccinated to get vaccinated,” Baker said. “I want to see more people get vaccinated, too. It really is the only way out of this.”

The Board of Elementary and Secondary Education received thousands of comments, mostly from parents, ahead of Tuesday’s meeting, member Martin West said.

West, who voted to grant Riley the authority, was one of three board members to speak during the 20-minute meeting and voiced concerns around “the lack of a clear end date or exit criteria for elementary school students who are not currently eligible for vaccination.” He also said he was not sure that requiring unvaccinated older students to still mask up while their vaccinated peers did not need to would work “on both practical and ethical grounds,” questioning how schools would know who had the shots and suggesting students might end up “tattling” on inappropriately maskless classmates.

The sole dissenting vote, Paymon Rouhanifard, said it was “just, frankly, really bad public policy” to tie the proposal to vaccination rates, and said he thinks linking it to community spread of the coronavirus would have been a “more reasonable” alternative.

Rouhanifard, the co-founder and CEO of Propel America and former superintendent of Camden, N.J. schools, said he was “genuinely surprised” that Baker backs the mandate because he considers the governor “to be really smart about technocratic policy solutions.”

Board member Matt Hills, who praised state leaders as “unafraid to pivot” in their pandemic response, voiced confidence in Riley, describing the commissioner as someone who would not “just keep restrictions in place for the sake of it.”

Riley is authorized to issue the mask mandate under the state’s regulations around student learning time. Those regulations say that when the board declares — as it did in Tuesday’s vote — that exigent circumstances exist that hinder students’ ability to safely attend classes, the commissioner “shall issue health and safety requirements and related guidance for districts.”

As of Aug. 13, 57 percent of the Massachusetts population between the ages of 12 and 17, or 271,900 people, were fully vaccinated against COVID-19, according to federal data. A total of 333,070 members of that age group had received at least one dose.

The Food and Drug Administration on Monday granted full approval to the Pfizer/BioNTech vaccine for use in people age 16 and older, and those shots are also available to youth between the ages of 12 and 15 under an FDA emergency use authorization.

There is still not a COVID-19 vaccine authorized for kids under 12. State officials have said they hope that could change as soon as this fall, but there is not yet a clear timeline for how much of the coming school year will play out with younger students still ineligible for a vaccine.

The Centers for Disease Control and Prevention recommends universal indoor masking for all teachers, staff, students and visitors in K-12 schools, regardless of vaccination status. Locally, groups including the Massachusetts Medical Society and the Massachusetts Academy of Family Physicians have also said masks should be required indoors for everyone in schools.

Massachusetts Teachers Association President Merrie Najimy said the vote was “a significant advancement toward keeping our communities safe as we prepare for a return to full in-person learning.”

“Students of all ages have been champions from the beginning,” Najimy said in a statement. “They quickly learned an important lesson of life â€“ that when they wear their masks, they are protecting their peers, educators, and the entire school community. Masks have become routine for them. We can count on students to do their part once again to help this comprehensive policy succeed as classes resume. As we have been saying for many months now, our top priority is to get our schools open safely and keep them open for full in-person learning. This vote is a step toward that goal.”