BOSTON — An issue that has been proposed, discussed and studied on Beacon Hill over the last several years got its perennial hearing Tuesday as the Joint Committee on the Judiciary again took testimony on the idea of shifting “emerging adults” into the state’s juvenile justice system.

Lawmakers on the committee heard from colleagues in support of legislation that would gradually raise the age of juvenile jurisdiction over several years to include people who are 18, 19 and 20 years old. The change would include that age group in the juvenile justice system or otherwise make diversion to community-based programs an option for them rather than having them go through the adult criminal justice system.

“I think too many of our young people have fallen prey to that system. And we don’t do the type of rehabilitation that I think this particular piece of legislation really is talking about,” Rep. Jim O’Day, the bill’s chief House sponsor, told the committee. “So when we send 17-, 18-, 19-year-old adolescents to an adult facility, there is very little rehabilitation going on in those facilities. If they were to be sent to a juvenile facility, there is a much greater likelihood that their ongoing education would continue. I think it’s really important to know the developing brain continues to develop through the age of 25.”

Berkshire District Attorney Andrea Harrington was among three county prosecutors to speak out in support of the measure.

Supporters pointed out that other Massachusetts laws recognize differences between 18-to-20-year-olds and older adults — the minimum age to buy alcohol or marijuana or to gamble is 21 years old, and supports are in place for people who transition out of foster care until they the age of 22, for example — and said that raising the age of juvenile jurisdiction would bring the justice system into alignment.

“Treating teenagers as teenagers rather than treating teenagers as adults in our criminal justice system actually promotes successful rehabilitation and reduces crime,” said Sen. Brendan Crighton, who along with Sen. Cynthia Creem has taken on advocacy of the bill initially filed by former Sen. Joe Boncore. “The juvenile justice system’s emphasis on continued education, family engagement, mental health and behavioral health is what the youth need, not interaction with an adult system that leads to recidivism and even escalation into more serious crimes.”

Crighton used an 18-year-old high school senior as an example. That student’s family expects to be in touch with teachers, guidance counselors and other adults who support their child’s transition to adulthood in the public school system.

“Yet in our criminal justice system, the student would be treated as an adult, not as a child,” the senator said.

Aside from programming that is not tailored to the needs of young adults, supporters said that putting a person through the adult criminal justice system at a young age has effects that often last for the person’s lifetime.

“An adult sentence establishes a permanent criminal record that creates overwhelming barriers to building a normal successful life after the sentence has been served. A criminal record stands in the way of obtaining housing, finding employment, obtaining public assistance, and accessing a college education,” the League of Women Voters of Massachusetts wrote in its summary of the legislation.

A 2013 law brought 17-year-olds into the juvenile court system, which had previously served youth age 16 and under. The state’s 2018 criminal justice reform law raised the minimum age of criminal responsibility from 7 to 12 but left the upper limit in place at 17.

But the law also created a Task Force on Emerging Adults in the Criminal Justice System charged with studying the treatment of people aged between 18 to 24 in the courts and correctional system, and evaluating “the advisability, feasibility and impact of changing the age of juvenile court jurisdiction to defendants younger than 21 years of age.”

“As chair in that committee, I heard significant testimony from experts and advocates in support of increasing the age of juvenile jurisdiction in Massachusetts,” Creem said Tuesday. 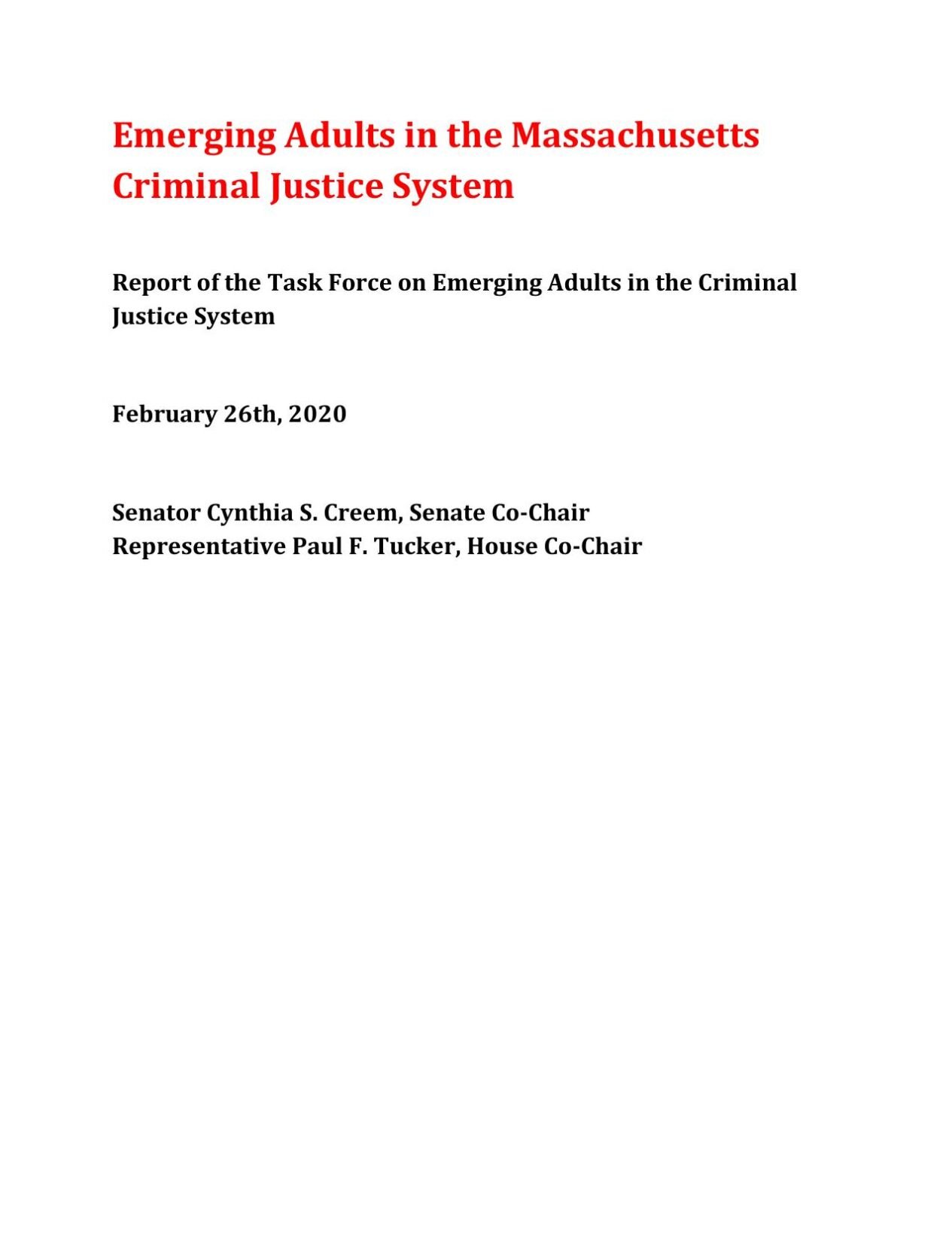 When the task force released its report in February 2020, the panel said it “is not recommending a specific course of action on the issue of raising the age of juvenile jurisdiction, but offers the following options for legislative consideration” and provided almost two pages of discussion of various ways to expand juvenile jurisdiction.

At least three county prosecutors — Harrington, Northwestern District Attorney David Sullivan and Suffolk District Attorney Rachael Rollins — told the task force they supported raising the age of juvenile jurisdiction. Juvenile Court Chief Justice Amy Nechtem, however, told the Task Force that expanding the juvenile justice system beyond the age of 17 would not be a good match for the court.

The issue has also attracted the attention of the New England Patriots and the Players Coalition, a nonprofit that aims to fight racial and social inequality. In 2018, Devin McCourty, Robert Kraft and Jonathan Kraft wrote a joint op-ed in the Boston Globe supporting a variety of juvenile justice reforms, including raising the age of juvenile jurisdiction to include 18- and 19-year-olds.

In 2019, Devin McCourty and his brother Jason wrote a Boston Herald op-ed supporting an expansion of juvenile jurisdiction to include 18-, 19- and 20-year-olds.

“Raising the age of juvenile jurisdiction is smart, in the interest of public safety and cost-effective,” the McCourty twins wrote.