BOSTON — A legislative commission has identified key obstacles — from a lack of affordable housing to the cost of child care — that it says must be addressed to help people grow into the jobs of the future.

The new report was produced by the Future of Work Commission, which was tasked with looking at ways the COVID-19 pandemic has changed the economy. It went beyond looking at what it will take to match employers with properly trained workers to also examine what types of supports workers will need to help them succeed in those jobs. 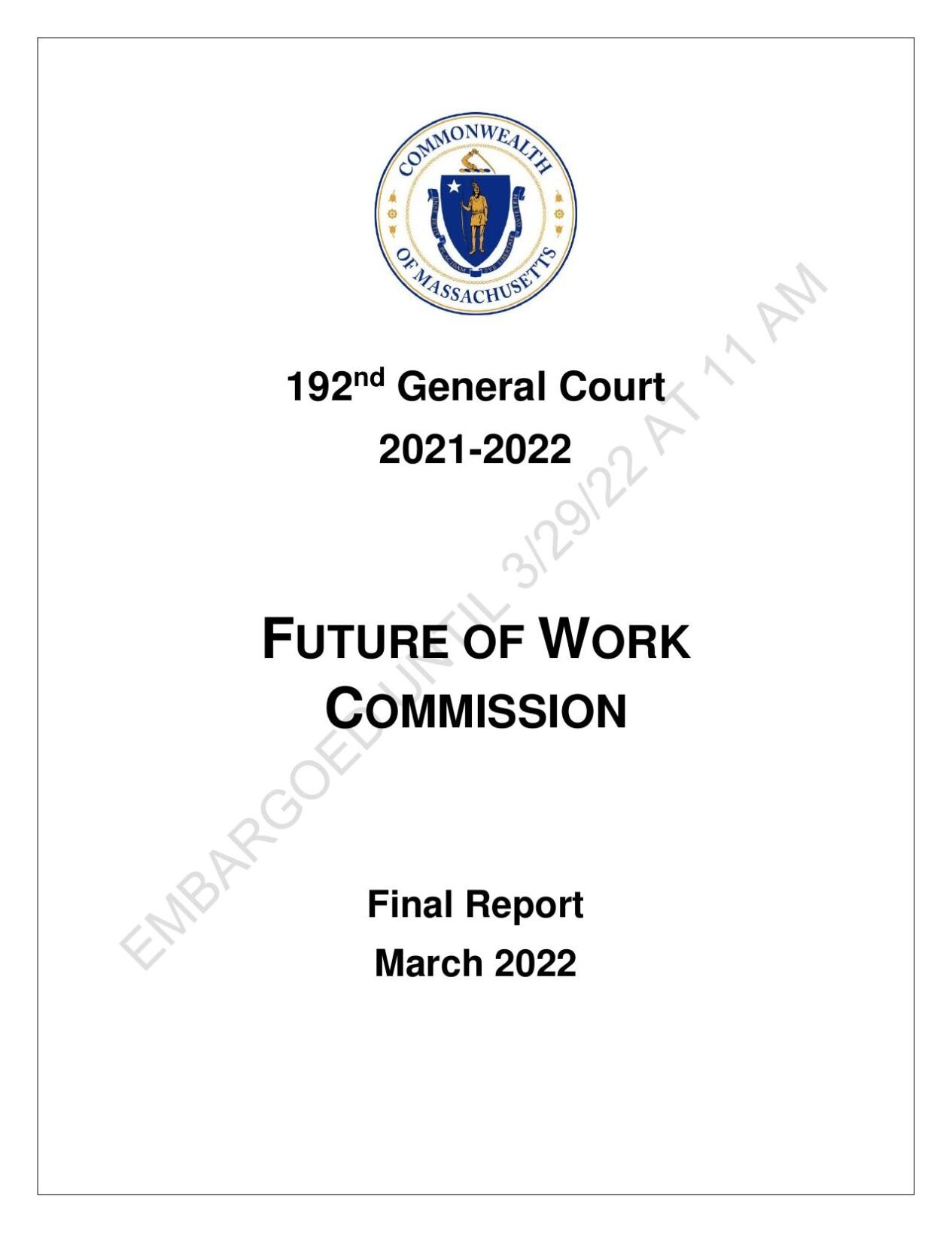 “The future of work ain’t what it used to be,” joked Rep. Josh Cutler, who co-chaired the commission along with Sen. Eric Lesser.

The 53-page report is the culmination of nearly a year of work and concluded that hybrid and remote work models are “here to stay,” bringing with them shifts in the demand for office space and housing.

Workers, the commission said, will need more flexible supports to succeed, including affordable child- and elder-care options, housing, and public transit schedules and fares that reflect new commuting patterns. State-funded workforce training also should be less rigid, the report concluded, and the state should promote “stackable credentialing” that would allow workers ongoing access to job training without the need to commit to a two-year or four-year college program.

The findings, in many ways, reflect some of the challenges that have already been identified by policymakers as obstacles to a post-pandemic economic recovery for all residents. Gov. Charlie Baker previously commissioned a “Future of Work” report from McKinsey and Co. that identified a lack of housing and child care options as an impediment to recovery, and predicted a shift in jobs away from the traditional urban centers around which transit and business has been developed.

“We’re obviously in a time of profound change,” Lesser said during a hearing Tuesday when the commission finalized and voted to file its report with the Legislature.

While the report did not identify many concrete actions the Legislature should take to address its findings, Lesser noted that the Legislature in the coming months will be considering health care, economic development and long-term transportation funding bills where money could be prioritized for the needs identified by the commission.

“The timing couldn’t be better given the multiple vehicles for funding and policy that we’re going to be grappling with in the Legislature,” added Sen. Adam Hinds, D-Pittsfield, a commission memeber who, like Lesser, is running for lieutenant governor.

In addition to higher salaries for child care workers, legislators and other commission members recommend prioritizing state funding to subsidize early education for working families so that they can fully participate in the workforce and have the time to learn new skills for future employment opportunities.

Commissioners also encouraged the careful regulation of automated hiring and recruitment tools that they said can lead to employment discrimination, and making sure workers have access to mental health support.

The report said that during the course of the commission’s work, which began in the spring of 2021, commissioners expanded the scope of the study from the intersection of new technologies and work to include an examination of supports like public transit patterns, lifelong learning models, child- and elder-care, housing accessibility, and more.

“It’s so refreshing to hear we’re not just talking about placement rates,” said Miriam Ortiz, director of education and training at Just-A-Start Corp.

Secretary of Labor and Workforce Development Rosalin Acosta said coordination with academic institutions will be key to meeting employer needs.

“It’s equally important to keep them in that job, and that retention piece is probably the hardest part,” Acosta said.

Lesser said that new technology and other rapid changes in workplaces are projected to displace 300,000 to 400,000 workers in Massachusetts who will need to be reskilled for careers in growing sectors like robotics, life sciences and biotech.

The Baker administration and the commission agree that the state will need to ramp up its workforce training initiatives to prepare 30,000 to 40,000 workers a year for new jobs, which is double the current rate.

Acosta and other members of the commission said part of the challenge will be getting employers to be active participants in the reskilling of the workforce and convincing workers in changing sectors like the service industry that careers in life sciences are not out of reach.

Other members of the commission noted the important role that public universities and community colleges can play in not just producing graduates with degrees, but properly training them for careers in growing fields through credential programs.

The report comes on the heels of another study done by the Special Legislative Early Education and Care Economic Review Commission that identified up to $1.5 billion in investments needed to increase salaries for early educators and make the child care system more affordable and accessible to families.

Senate President Karen Spilka said last week during a joint interview with House Speaker Ron Mariano that she would like to begin to address the state’s child care needs this session, and Mariano suggested the House may start with some of the less costly improvements in its version of the annual state budget due out next month.

Gov. Charlie Baker also told the Greater Boston Chamber of Commerce last week that he intends to file an economic development bill shortly that will include a request for more federal funding to help cities and towns adapt their downtowns to changing work and commuting patterns.

Baker said the Legislature approved some, but not all, of his funding requests to promote housing development and homeownership in last year’s American Rescue Plan Act spending bill, but authorized none of his requested spending for downtown redevelopment.

One item recommended by the Future of Work Commission has already been adopted by the MBTA.

The panel embraced the idea of discounted flex passes on the commuter rail that will allow riders who commute less frequently to the office to maximize their travel budgets.

Is the hybrid work model here to stay in 2023? For many Berkshire businesses it is

The pandemic changed where people do their jobs. People who run Berkshires workplaces say the flexibility ushered in during a public health crisis is a permanent fixture. Here's why.