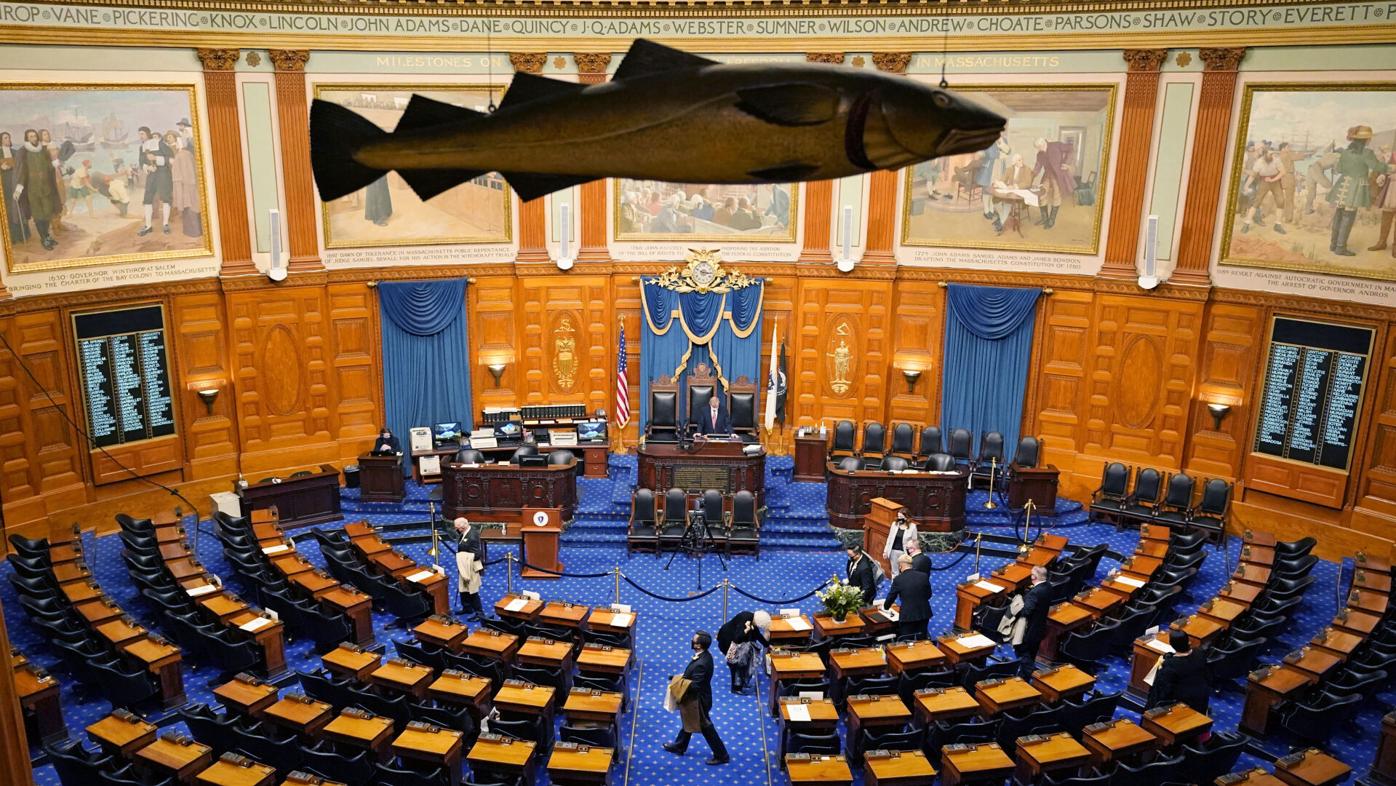 The Massachusetts House of Representatives chamber is shown in 2020. The House and Senate both unanimously approved a $48.1 billion state budget Friday. 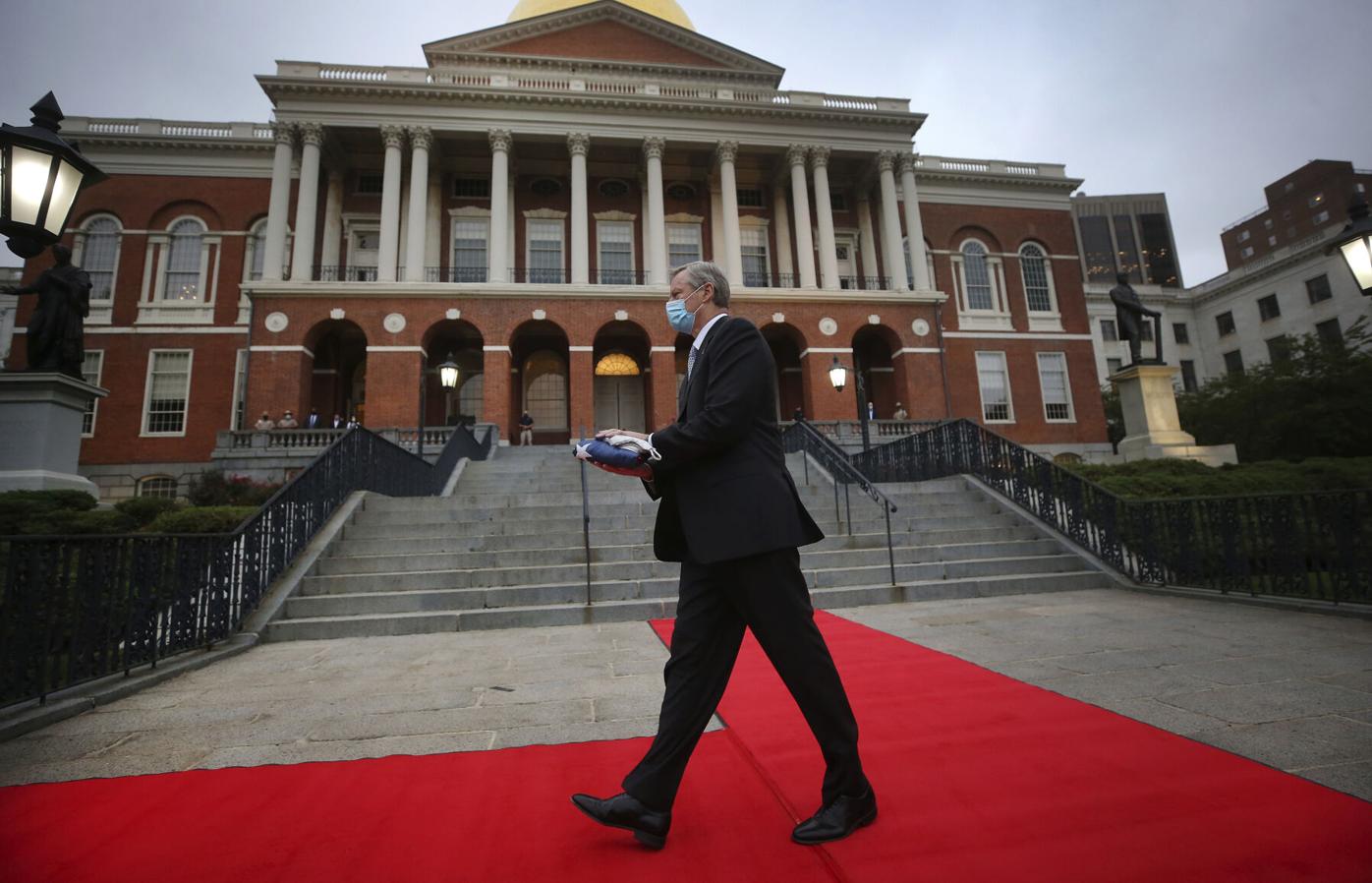 Gov. Charlie Baker walks down the steps of the Massachusetts State House in 2020. After the House and Senate approved the annual state budget Friday, Baker will now have to put his signature on the spending plan.

The Massachusetts House of Representatives chamber is shown in 2020. The House and Senate both unanimously approved a $48.1 billion state budget Friday.

Gov. Charlie Baker walks down the steps of the Massachusetts State House in 2020. After the House and Senate approved the annual state budget Friday, Baker will now have to put his signature on the spending plan.

More than a week into the fiscal year, the House and Senate agreed in bipartisan fashion to a $48.1 billion annual state budget and shipped the proposal to Gov. Charlie Baker’s desk.

House Ways and Means Committee Chair Rep. Aaron Michlewitz, who co-chaired the conference committee that resolved differences between the House and Senate budget proposals, said the vote will “mark a capstone to a volatile 16-month odyssey we have seen since the pandemic first struck the commonwealth.”

At this time last year, budget writers were fretting a potential tax revenue implosion and wondering if state reserves would be enough to hold public services together. But taxpayers have delivered robust collections for the state, enabling significant spending increases and allowing historic deposits into the rainy day fund.

“We’ve been through a lot, and we’ve come out of the last year and a half in a stronger fiscal situation than any of us could have ever imagined,” Michlewitz, a North End Democrat, told his colleagues prior to the vote.

Rep. Todd Smola of Warren, one of two Republicans involved in the budget talks, praised the final accord as a “culmination of those good working relationships that we have with one another across the aisle.”

While all 160 representatives and 40 senators voted to accept the conference committee budget, two Senate Democrats running for higher office criticized some aspects of the spending plan before approving it.

Sen. Sonia Chang-Diaz, a Jamaica Plain Democrat vying for the gubernatorial nomination, said there were “a few items that give me real concern,” including the decision to shift $350 million into a reserve for later years of the Student Opportunity Act.

The budget funds one-sixth of that $1.5 billion school funding reform law, approved in 2019, after the pandemic disrupted its original seven-year implementation timeline. Chang-Diaz said she believes the Legislature should have used part of the $350 million fund to immediately increase school funding this year, particularly as districts attempt to recover from more than a year of pandemic-fueled upheaval.

“If districts have to engage in accounting acrobatics to figure out how to stretch their one-time (American Rescue Plan Act) money to cover operational costs that the state is dropping the ball on, that means they’re not moving to spend the recovery money now to meet the needs of the moment,” Chang-Diaz said. “That will be an awful and avoidable shame on our commonwealth.”

State auditor candidate and Methuen Democrat Sen. Diana DiZoglio slammed the final budget for dropping language that would have required a study on allowing legislative staffers to get health insurance through the state Group Insurance Commission. She also jabbed at leaders for scheduling a vote on the compromise less than a day after the conference committee submitted its report.

“This is occurring yet again, positioning members to vote on something we did not get adequate time to review. It’s not acceptable,” DiZoglio said. “If we keep doing this over and over again, it’s not going to become magically acceptable.”

Legislative negotiators found compromise on the multiple policy areas that separated the House and Senate budget bills, including the future of a program offering tax credits to film and television productions in Massachusetts. Supporters praise the program as an economic boon, while opponents contend it siphons resources away from the Bay State with insufficient returns.

The House voted unanimously in April to eliminate the sunset date altogether, while the Senate voted to push it back four years while imposing several additional eligibility requirements on the tax credits.

“Thanks to the legislature’s action today, Massachusetts will be poised and ready to capture the growing streaming TV industry that will bring even more good-paying jobs to Massachusetts for years to come, employ more local workers, and spend millions of dollars with more local businesses,” said David Hartman, executive director of the Massachusetts Production Coalition.

The final budget does not include Senate-authorized language allowing the purchase of Massachusetts Lottery products with debit cards, which that branch and Gov. Charlie Baker have both unsuccessfully sought in previous spending bills.

Negotiators also dropped another section from the Senate budget that would have increased the per-ride fees imposed on ride-hailing companies such as Uber and Lyft.

The bill does not propose any broad-based tax increases, a fact that Smola highlighted as he warned against pursuing tax hikes to fund priorities.

“While we have made so many significant investments in this document, I think it’s important to note that we did it without raising taxes,” Smola said. “I hope my colleagues will pay attention to that as we progress throughout the course of this term. While with some it may be desirable to go after the pocketbooks of the men and women of this commonwealth, I think it’s notable to recognize that through good fiscal policy and strong management, we are able to invest in these programs that are critical and do it without going after taxes across the board.”

The $48.07 billion bottom line that budget writers assigned to their bill differs from the “grand total” of $50.062 billion included in the actual budget bill. A House budget aide said the higher figure accounts for anticipated transfers, such as the planned deposits into the state’s rainy day fund, the $250 million that will go to pension reserves, and the $350 million targeted for a Student Opportunity Act reserve.

Lawmakers opted again to postpone the implementation of a tax deduction designed to increase donations to charities and non-profit organizations, a move that officials in the spring said would free up $64 million to spend. The charitable deduction, approved by voters statewide in 2000 but then held up by a series of delays, now will not begin until at least 2023. The budget bill does not explicitly set a new start date, and simply says the program “shall not be allowed for the taxable year beginning Jan. 1, 2022.”

Jim Klocke, CEO of the Massachusetts Nonprofit Network, said both chambers had agreed to delay implementation of the deduction, so it wasn’t subject to negotiation. But Klocke said the tax policy should move forward.

“We think the state’s strong revenue growth opens the door to implementing the state charitable deduction,” he said. “We understood the need to delay it during the pandemic. But now we’re in a better place and now we should move to implement the deduction.”

Klocke predicted the deduction would benefit hundreds of thousands of taxpayers, most of whom have low or mid-level incomes, while promoting donations “to all types of nonprofits that have been doing so much to address our health, racial equity and opportunity challenges.”

The compromise spending plan would also convert a child care tax deduction into a refundable credit, a $16.3 million proposal that Senate leaders have said would offer an average credit of $190 to about 85,000 low-income families.

After tax revenues surged well beyond expectations in fiscal 2021, the conference committee revised its fiscal 2022 tax collection estimate upward by $4.2 billion, with much of that revenue used to eliminate the reliance on one-time revenues in the earlier House and Senate proposals.

The original budget bills both branches approved this spring each called for using at least $1.5 billion from the state’s “rainy day” fund, but the conference committee rewrite cancels that withdrawal.

Lawmakers instead suggest bulking up the savings account further with $1.1 billion from a surplus in fiscal 2021 and with another $1.2 billion in fiscal 2022, which officials said would push its total balance to about $5.8 billion by this time next year. Michlewitz said that amount would represent “an unparalleled record that will position the commonwealth to weather any fiscal troubles that might be before us.”

“Achieving a balance well in excess of $5 billion is a critical goal for the Commonwealth as we build our economic recovery and prepare for future challenges,” the Massachusetts Taxpayers Foundation wrote in a report about the budget redraft.

One section of the budget will create new statewide standards for certifying U-visa and T-visa applications for survivors of violent crime and human trafficking, according to Sen. Mark Montigny, who also filed the measures as a standalone bill.

“These protections for victims and survivors are long overdue,” Montigny said in a statement. “We know from talking with advocates and community partners that this type of violence has thrived during the pandemic, which has inflicted intense financial pressures, family illness, heightened workplace demands, and increased levels of isolation. I hope that our action today will provide enhanced access to the resources and protections necessary to escape such abuse, especially at a time when immigrants have been the target of intense fear mongering and attacks in our political discourse.”