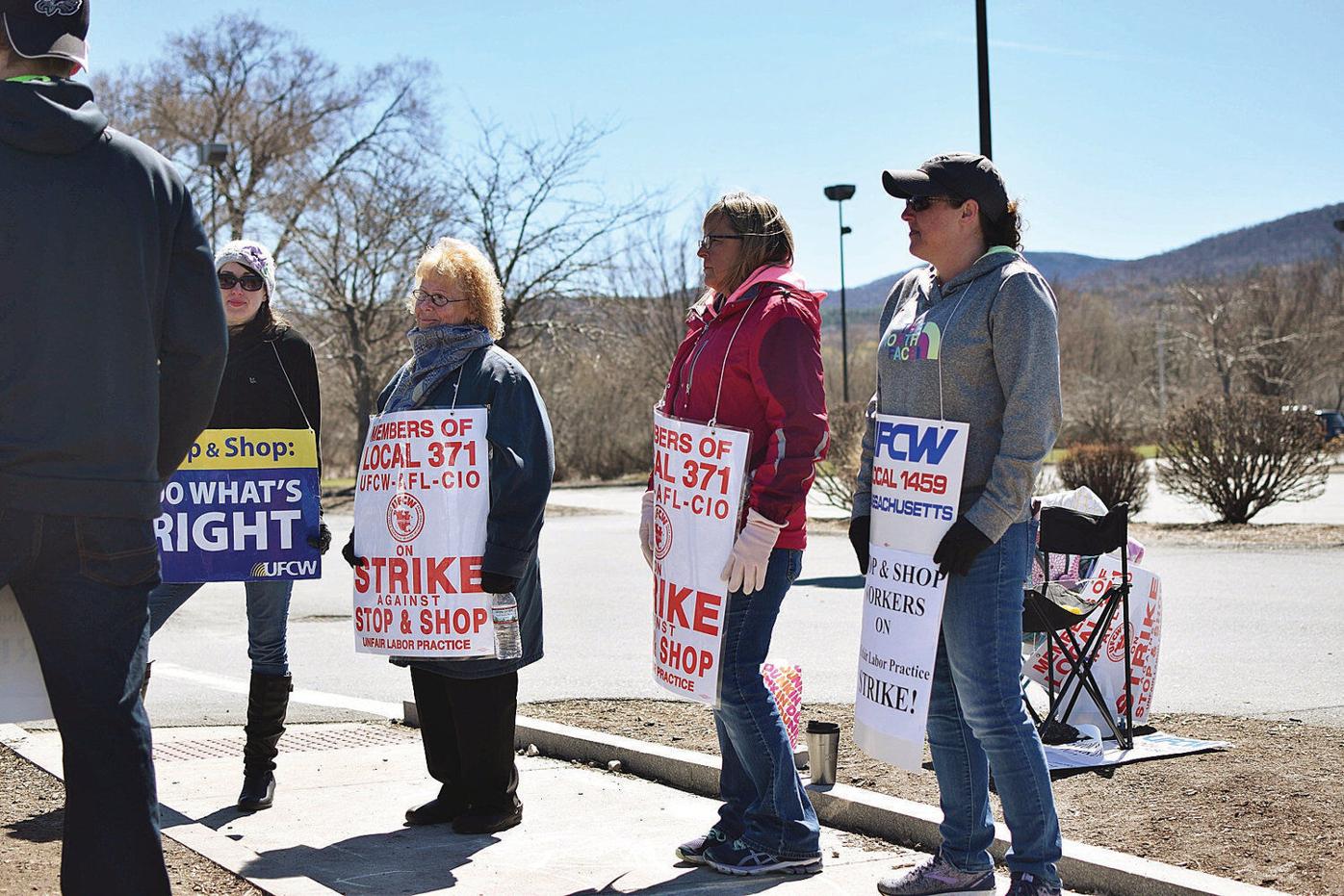 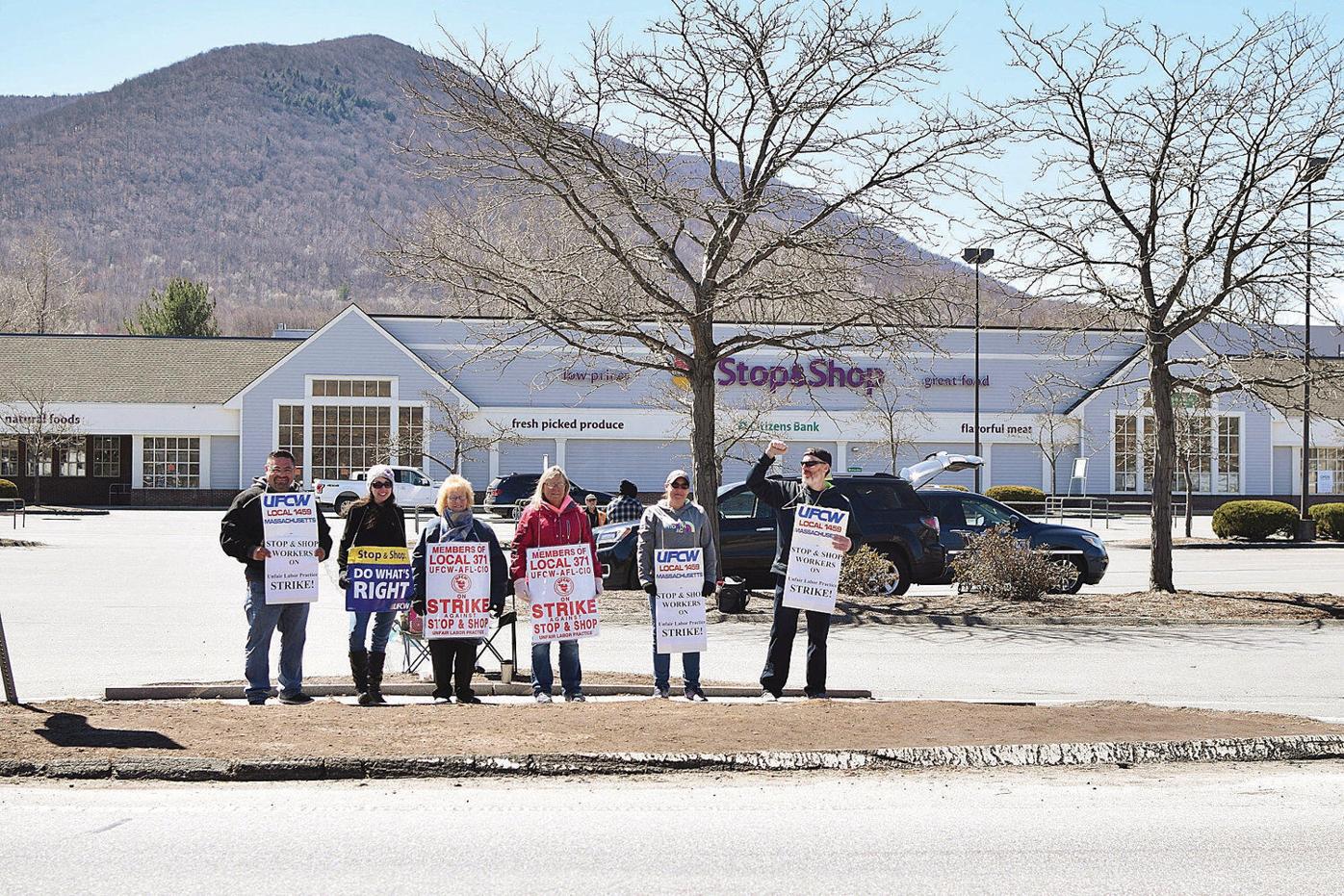 Outside the Stop & Shop in North Adams late Wednesday morning, a steady stream of passing motorists blared their car horns in support of roughly a dozen picketing workers.

But inside, the store was dead quiet, with not a single customer walking through the aisles.

Although the shelves were still lined with boxed goods like pasta, the store's bakery, produce and meat departments offered slim pickings.

A similar scenario played out at the Stop & Shop on Dan Fox Drive in Pittsfield.

A lone customer pushing a shopping cart down an aisle found some shelves barely stocked.

The bakery was devoid of fresh bread, rolls and pastries. In the refrigerated sections, gallons of milk and dozens of packaged boneless chicken breasts in their respective dairy and meat cases were past, or approaching, their sell-by date. The only open lanes were the self-checkout ones.

Seven days in, the striking Stop & Shop union workers were having a deep impact on the 240 stores in Berkshire County and across Southern New England. Reports of eerily quiet stores stretched across the commonwealth.

The reason, according to union leaders, is that a large majority of customers support the members of the United Food & Commercial Workers who walked off the job last Thursday, primarily over wages and health care benefits.

Szulborski is a vice president with UFCW Local 1459 that represents 1,300 Stop & Shop workers in Western Massachusetts, some 300 to 400 total at the one supermarket in North Adams and two in Pittsfield.

The union representative told an Eagle reporter the picketers want to get back to work, but remain steadfast in wanting a fair contract. They had been working under a contract that expired Feb. 23.

"The fact that the picket lines remain strong prove we are on the right side of things," Szulborski said.

In all, 31,000 Stop & Shop union employees in Massachusetts, Connecticut and Rhode Island have been on strike after contentious talks broke down Thursday. Negotiations resumed on Saturday and have been ongoing between management, presidents of the five UFCW bargaining units and federal mediators.

Union leaders claim Stop & Shop is trying to reduce pay and various benefits, especially among the younger workers. Stop & Shop says their latest offer maintains many of the benefits and continues to make their workers among the highest paid in the retail grocery industry.

Earlier in the week, Mark McGowan, president of Stop & Shop's New England Division, made a personal pitch to the strikers to accept the company's latest proposal. McGowan has also publicly apologized "for the inconvenience that the strike has caused our loyal customers."

While the majority of the stores remain open from 8 a.m. to 8 p.m., included all three Berkshire locations, McGowan, in a statement, acknowledged the customers are dealing with limited services.

"Be assured, we are grateful for your understanding and are working around the clock to get back to business as usual. In the meantime, thanks for sticking with us," he said.

A pair of local state lawmakers are sticking with the striking workers. State Rep. Tricia Farley-Bouvier, D-Pittsfield, has been taking photos with the picketers and showing her support for them on social media.

"When you talk with the folks on the picket line, they aren't asking for much," he said. "The energy of support for the workers across the region is incredible."

Should the strike continue through the weekend, shoppers preparing for Easter or Passover will have already gone elsewhere, according to retail industry analysts.

Burt P. Flickinger III, managing director of Strategic Resource Group, told The Boston Globe that Stop & Shop permanently losing even 5% of its customer base due to the strike could have a major financial impact on the supermarket chain.

"In nearly 30 years, we haven't seen a strike as effective and devastating as this one," he said.