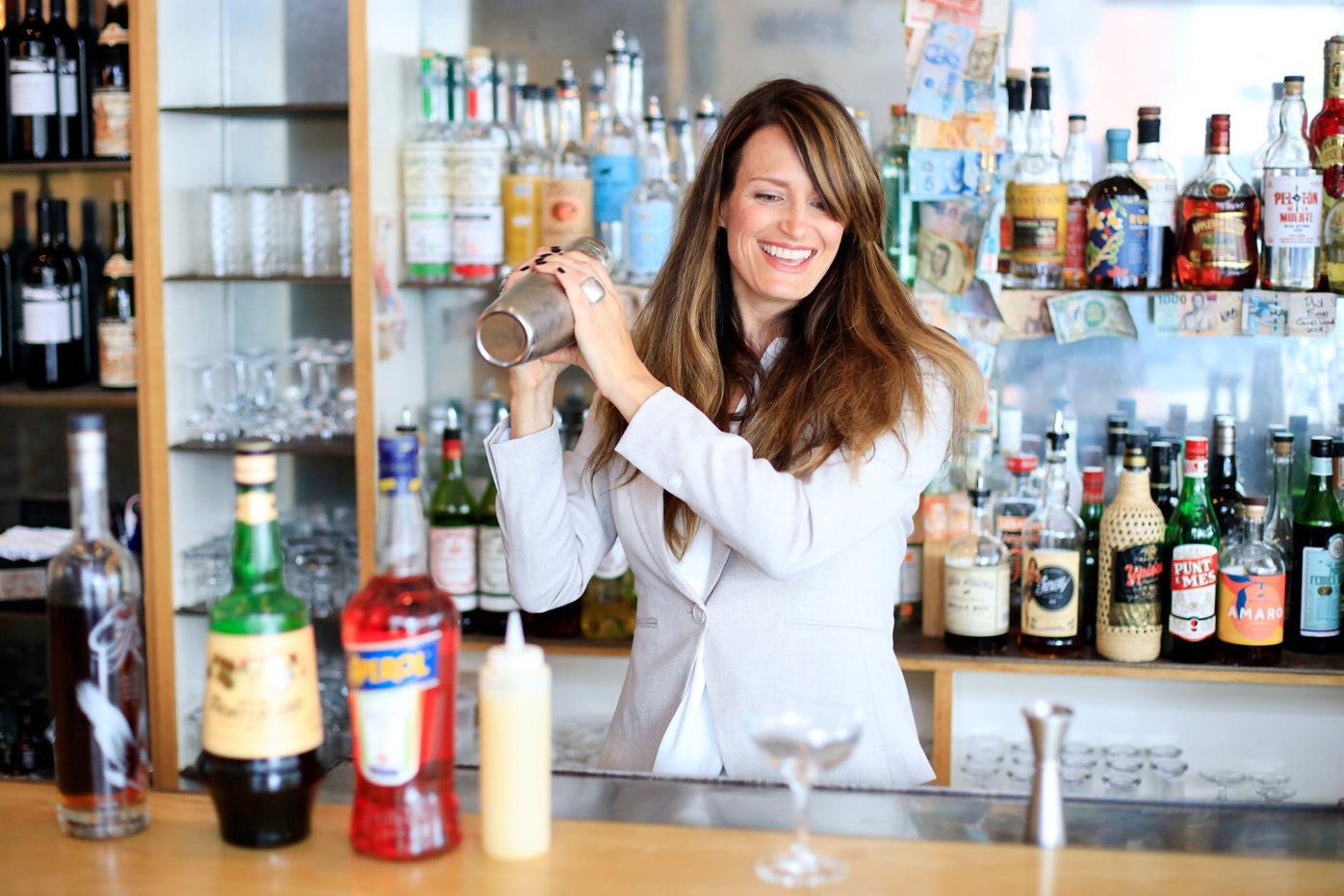 Lauren Ferin has been bartending at Methuselah Bar and Lounge in Pittsfield for four years. 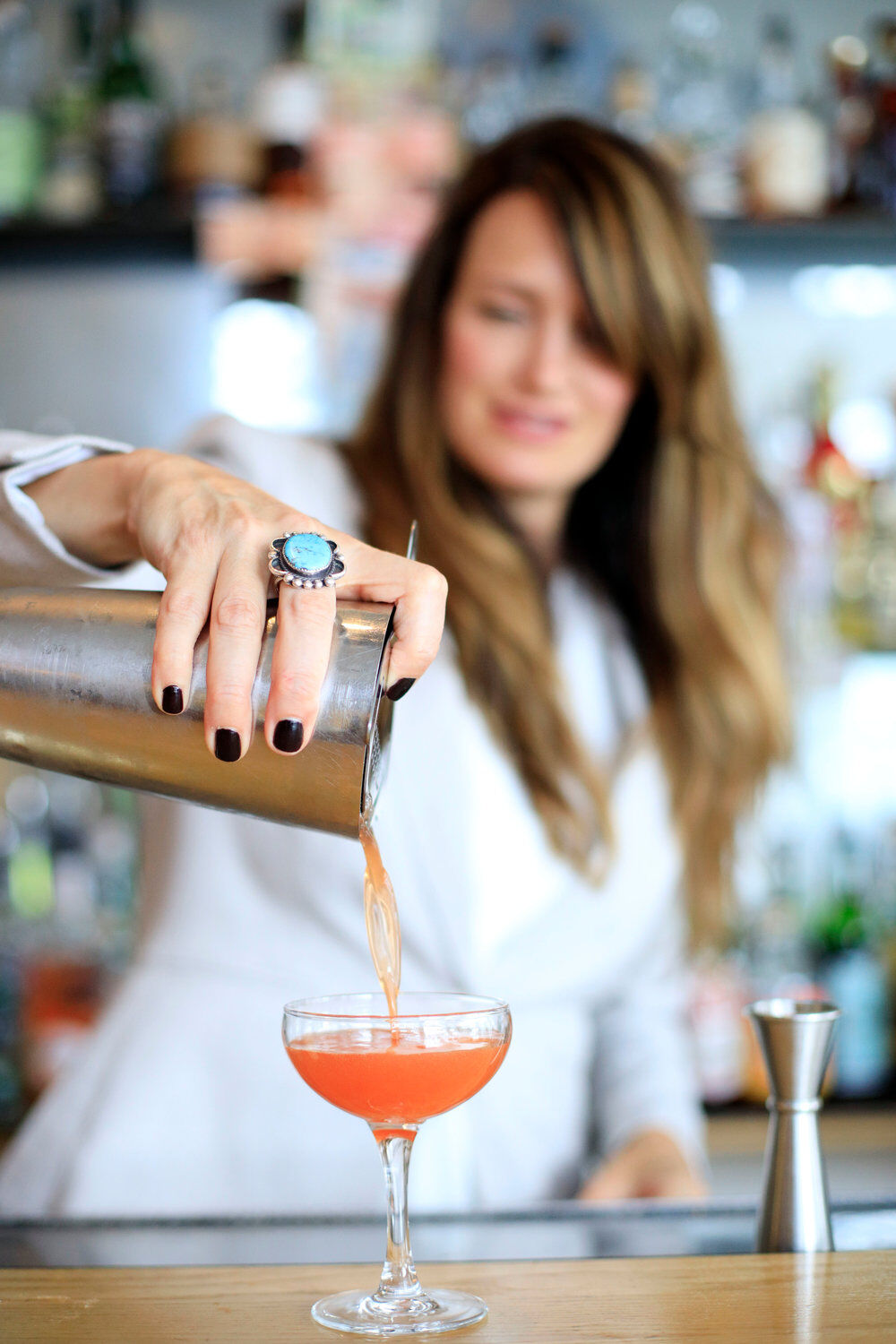 Ferin loves making whiskey drinks like the "Paper plane," a drink made with bourbon, Amaro, Aperol and lemon juice with a lemon twist garnish. 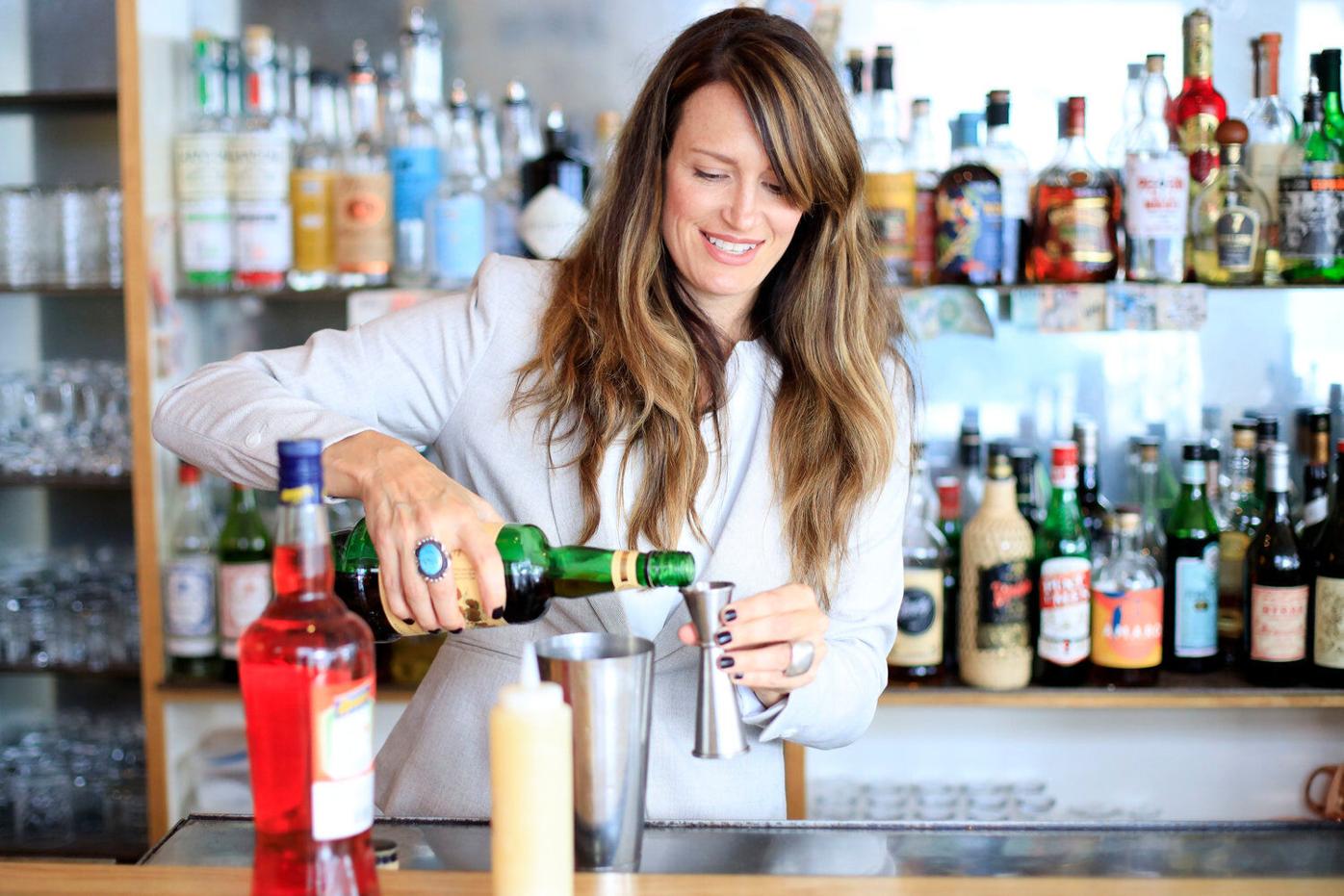 Ferin enjoys chatting with patrons about community, religious and spiritual ideas and where's the best place to see live music. 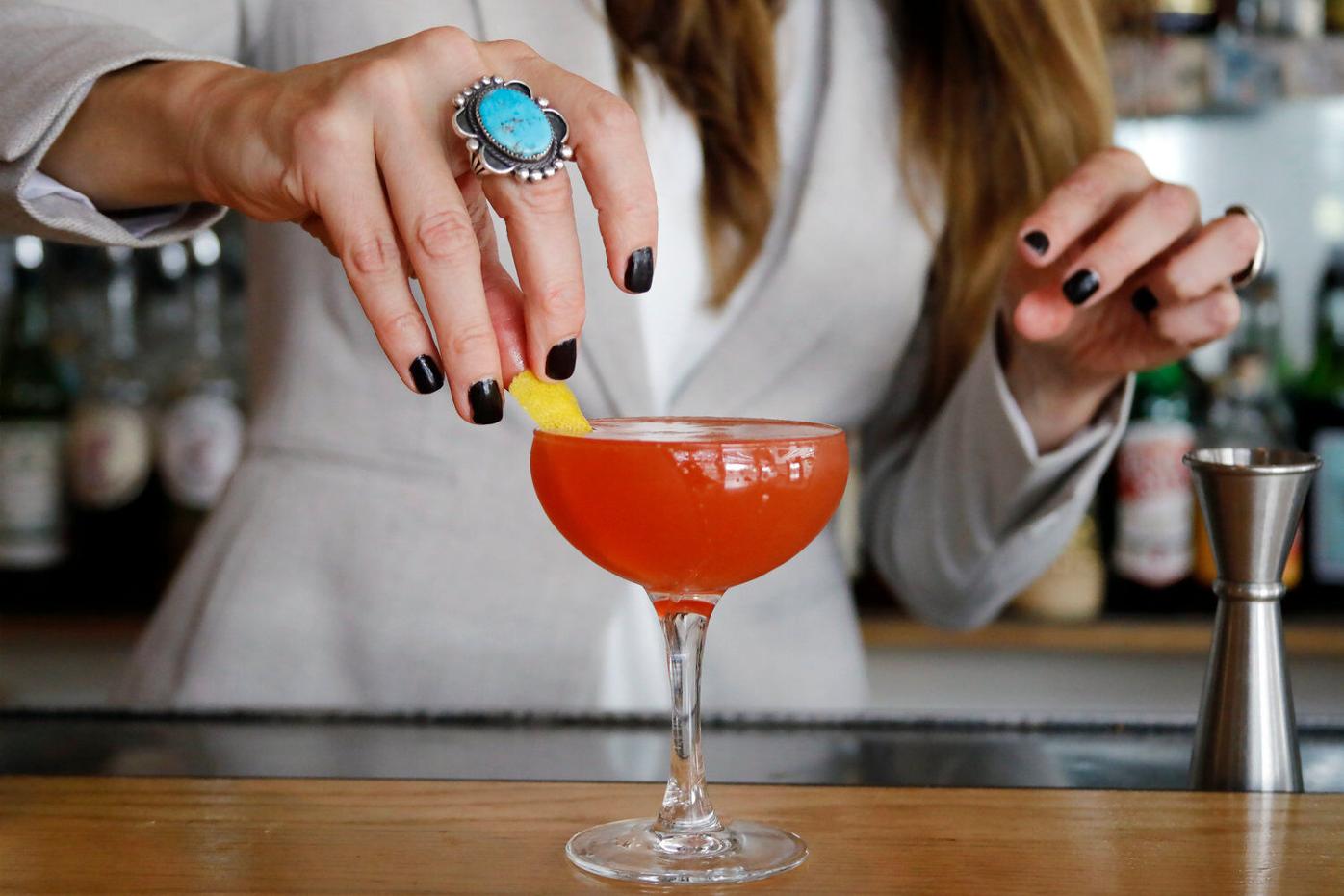 At Methuselah Bar an Lounge, cocktails are artfully crafted. The North Street establishment offers drinks with fun names the Berkshire Bramble, the Paper Plane and Aviations.

Lauren Ferin has been bartending at Methuselah Bar and Lounge in Pittsfield for four years.

Ferin loves making whiskey drinks like the "Paper plane," a drink made with bourbon, Amaro, Aperol and lemon juice with a lemon twist garnish.

Ferin enjoys chatting with patrons about community, religious and spiritual ideas and where's the best place to see live music.

At Methuselah Bar an Lounge, cocktails are artfully crafted. The North Street establishment offers drinks with fun names the Berkshire Bramble, the Paper Plane and Aviations.

PITTSFIELD — Lauren Ferin describes herself as the "mama bear" at Methuselah Bar and Lounge. Ferin has worked for four years at the hip North Street establishment that opened in 2015, making her one of the bar's longest-tenured protectors of its esteemed craft cocktail concoctions.

Though she can go into great detail about the benefits of Methuselah's house-made simple syrups and other ingredients, Ferin has spent most of her professional life outside the bartending realm. The Dalton native attended Wahconah Regional High School and Berkshire Community College before beginning a career in modeling that took her to New York, Japan and Austria, among other locales.

She also wanted to save enough money to go back to school. Her affiliation with a Chicago agency led her to Columbia College, where she took film classes for a couple of years. But she was doing "a lot of soul-searching" at that time and subsequently uprooted to a New Age religious ranch in Montana, where family members of her then-boyfriend were living.

"I've always been hot for Jesus, not in a weird sense, but just very curious about, 'Why am I here? What's my purpose?'" Ferin said. "I always want to strive to be a better human than I was the day before."

"If you go into Barnes & Noble, you can find her books on karma and reincarnation, the lost years of Jesus, the Kabbalah," Ferin said. "So, that's what was really exciting for me, is I was learning all about the world's religions."

Eventually, Ferin met her ex-husband and had a child, Simon Kneeland, who's now a sophomore at Ithaca College. She took some more film classes at Montana State University, earning a bachelor's degree, before returning to Massachusetts and helping Kelley Vickery start the Berkshire International Film Festival. Fourteen years later, she still works as an executive assistant for BIFF while holding down two other jobs: receptionist at Seven Salon Spa and, of course, bartender at Methuselah. She's also managing the Pittsfield City Council campaign for Yuki Cohen, the Methuselah owner whom Ferin calls "an amazing boss."

"I kind of feel like I've lived many lives in the time I've been on this planet," Ferin said, "but it's all been very exciting."

Q: What's the most common drink order you get here?

A: When the bar's eight people back, it's always going to be a beer [laughs]. But generally, I love Manhattans. I love anything that's whiskey-based because you always enjoy making what you enjoy drinking. ... Aviations are fun, too, just because the color of it reminds me of Marge Simpson's hair. It's like this blue, cloudy, gin-based drink with a cherry, Luxardo Maraschino Liqueur, the violette liqueur, which gives it that purple-y-gray color. [Ferin also mentioned Paper Planes: one ounce bourbon, one ounce Amaro liqueur, one ounce Aperol, one ounce lemon juice, lemon twist garnish.]

A: It's probably going to be anything with an egg in it because you're getting the egg yolk from the egg white, and then it's all over your hands, and then you're shaking it. ... So, usually anything that's like a six-step process, especially when you're busy, is not too fun.

Q: What's in your fridge at home?

A: I've got Berkshire Mountain Distillers rum. I've got vodka in the freezer. I have a dry white in my fridge, as well. ... I have just about everything in my liquor cabinet, which is funny because I don't like to drink alone, and generally my drinks are dependent upon the environment I'm in and the food I'm eating. That really is the basis for what I'm drinking. Red wine in the winter, yes, but you'll never find me drinking it in the summer at Tanglewood. It's going to be sparkling rose or that sort of thing.

Q: What do people come in here and talk to you about the most?

A: The out-of-towners are always looking for suggestions of what to do, so I actually enjoy that. ... People like to talk about just the state of affairs ... politics, Trump, the environment, what can we do collectively as a community to make Berkshire County and Pittsfield better, because we're all in this together. I don't get too many people, unless they've had a couple, who really open up about personal things, and I try not to go there with people because I don't have a degree in psychology, and I would never want to give them the wrong kind of advice.

Q: What do you wish people talked to you about or asked you about more?

A: I love to talk about spiritual things. I love to talk about what gets people up in the morning, where their mind-set is, do they believe in a higher power, what connects all of us. I think that what interests me most is having that connection with people and, because I'm an Aquarius — I'm big into astrology — I am pretty open and like to hear about all sorts of opinions. I'll have my own, obviously, but that type of topic tends to not be spoken about a lot because it is so personal. Yuki and I talk about quantum physics and manifesting things in your life and the power of your words and your thoughts. It's kind of like all this New Age-y stuff. If anyone likes to go down that rabbit hole with me, I love talking about that.

A: As I was saying, sometimes I feel like a mama bear in here. I've had to break up a couple fights. ... We've actually had some pretty well-known people in the bar. I wasn't here for Elizabeth Banks, but there's one actor [Gerard Butler] who sat at the bar eating tacos.

Q: When you're off the clock, what do you like to do?

Q: What should people know about bartending that, if they've never been a bartender, they might not know?

A: One thing is that we have a Yarai [mixing glass], and we have the stainless steel shaker. And what people don't know is, generally, if you're going to use a citrus, you're going to shake it in a shaker. If you don't use any citrus at all, it generally will be stirred in the Yarai. Some people ask about martinis or Manhattans, "Do you want it shaken or stirred?" But generally, that's the distinction in a Yarai, it's not citrus-based.

Do you have some favorite bartenders? Are you afraid to ask them random questions about their lives? Contact Benjamin Cassidy at bcassidy@berkshireeagle.com, at @bybencassidy on Twitter or 413-496-6251 to nominate a bartender for this monthly series. You may just find the answers you're seeking.