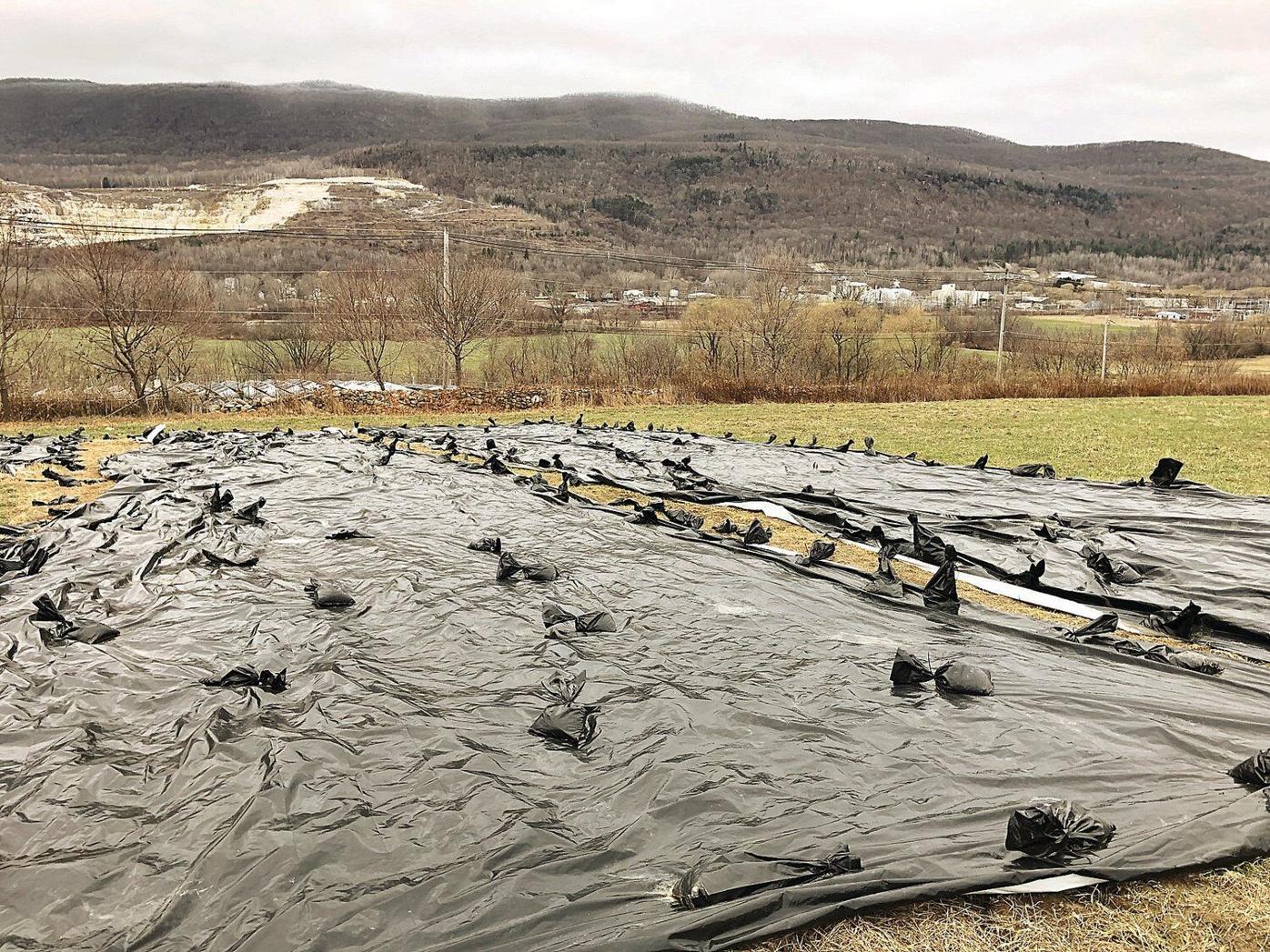 Tarps are used at Full Well Farm, in Adams, to kill grass growth on soil that is being cultivated through this no-till method for future farming. 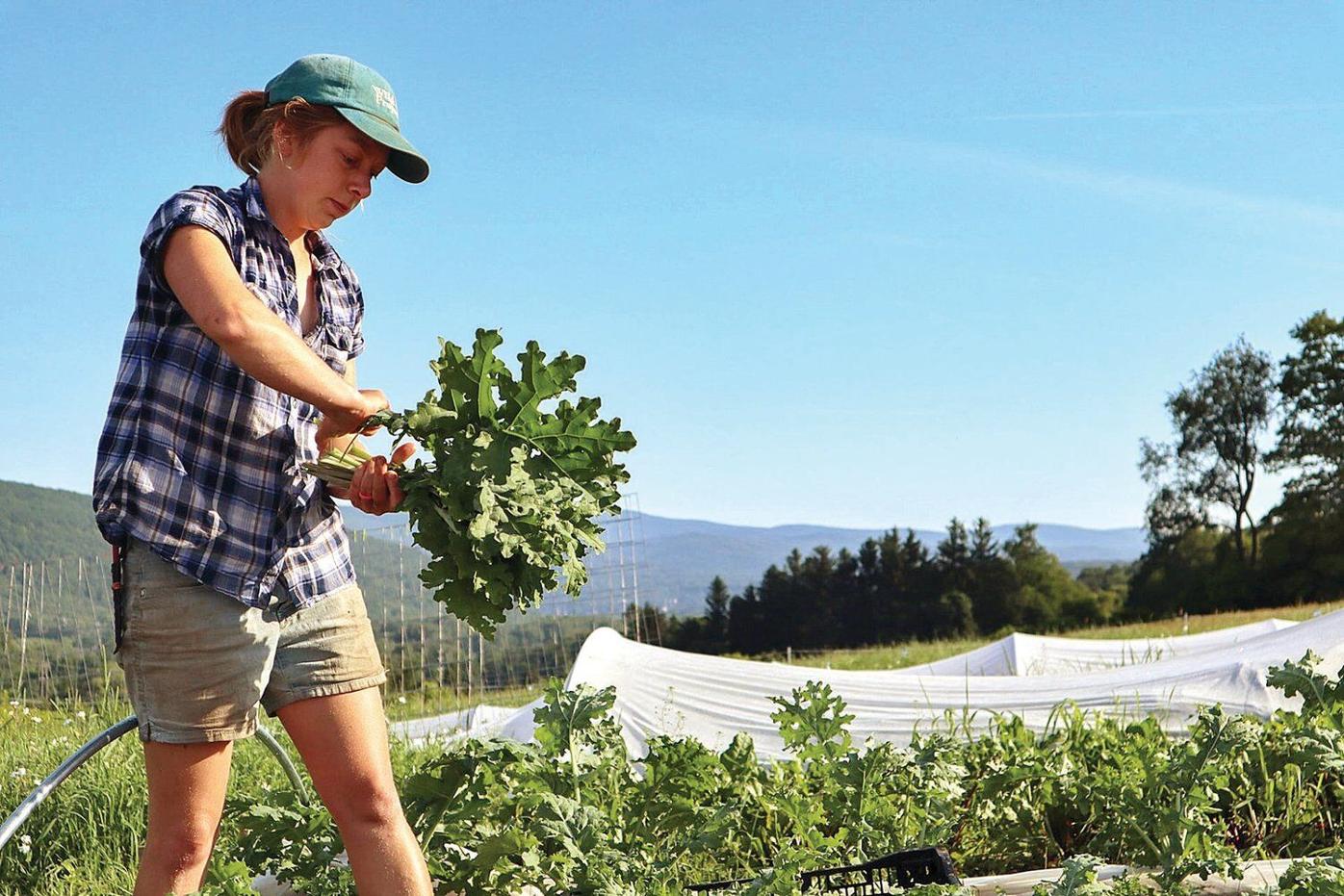 At Full Well Farm, no-till practices are used on their one-third of an acre growing space.

Tarps are used at Full Well Farm, in Adams, to kill grass growth on soil that is being cultivated through this no-till method for future farming.

At Full Well Farm, no-till practices are used on their one-third of an acre growing space.

"That is a no-till method of prepping new land," Meg Bantle said, overlooking the small Adams plot that she and Laura Tupper-Palches rent from Burnett Farm.

No-till? For those not in the farming know, no-till farming is a sustainable agricultural philosophy that focuses on minimizing soil disturbance. Traditionally, farms will use machinery to clear weeds and prepare for planting, overturning the thin top layer of soil and replacing it with subsoil that is often lacking in organic matter and fertility. This inversion pairs the soil's carbon with the air's oxygen, leading to carbon dioxide emissions and thus contributing to global warming. Tilling can also harm below-ground life.

"You're completely decimating the biology that's in your soil," said Jim Schultz of Red Shirt Farm in Lanesborough. "It's not just things like earthworms that we can see and all these arthropods — these little small insects and stuff — but it's all microbial life. In one teaspoon of soil, there's more microbes than there are people on the Earth."

With no-till farming, the idea is to avoid the deep churning of soil. No-till techniques preserve the dirt's structure and ecosystem, increasing its nutrients, decreasing its erosion, preserving its moisture and keeping carbon underground. Nationally, the practice has been increasing for decades, a movement away from the greenhouse gas-emitting habits of large industrial farms. Locally, there were nearly 40 farms in Berkshire County using the no-till philosophy to guide their work in 2017, according to a U.S. Department of Agriculture census analysis done by nonprofit Berkshire Agricultural Ventures. These farms don't all employ the exact same practices; no-till tactics range from farming solely by hand to some use of equipment. Still, the goal is typically the same: to create a resilient, nutritious food source for a community that can both mitigate climate change and help weather its extremes, such as floods and droughts.

"Understanding soil and our relationship to soil and the significant role that land can play in actually sequestering carbon out of the atmosphere and back into the earth where it belongs, where it came from, I think it's just a huge opportunity that we have as a community to be a model for the global community," said Jen Salinetti of Woven Roots Farm in Tyringham.

Salinetti provided counsel to Bantle and Tupper-Palches, who founded their vegetable and flower farm in 2018. For nearly 20 years, Salinetti and her husband, Pete, have run Woven Roots Farm, a diversified vegetable operation that produces about 75 different varieties of crops throughout four seasons of the year, as well as cut flowers and culinary and medicinal herbs. For 15 of those years, they have been "100 percent" no-till. They follow a strict interpretation of the concept.

"Our experience of being no-till farmers translates into being completely by hand. And I think that that is — it's somewhat unique and not unique historically. It's part of the indigenous wisdom," Salinetti said.

Because no-till practices can vary, sometimes people are confused about Woven Roots' methods.

"They go, 'Oh, no-till, so you are planting cover crops and then crushing those cover crops by tractor, and then using a tractor to then further go in and plant crops within these cover crops that you have laid out,' and that's not what we do here," Salinetti said. "What we have here is a permanent bed system that is completely managed by hand."

Local compost, mulches and cover crops all facilitate growth on the Salinettis' one-and-a-half acres; they've never used chemical fertilizers, herbicides or pesticides. For larger farms, it can be more challenging to practice no-till. For example, Indian Line Farm, in South Egremont, aims to minimize tillage on its 17 acres, but uses methods that don't qualify as no-till, according to co-owner Elizabeth Keen. That doesn't mean the farm is shunning the soil.

"Without healthy soil, I can't be a farmer," Keen said.

Salinetti noted that larger no-till farms using tractors still represent progress, if not all of the ideals she promotes.

"It's allowing soil to be covered and helping to lock carbon back into the soil and out of the atmosphere," she said. "But there is not the ability to have the diversity that we have on our farm when we are relying on tractors. [And], tractors themselves, obviously that's a use of fossil fuel."

Schultz stressed that it's important for farmers to support one another even if they have different techniques.

"Anybody who's farming, all the power in the world to them because it's one of the hardest jobs in the world, and it doesn't pay very well," he said.

Still, he strongly believes in forms of regenerative agriculture, which Berkshire Agricultural Ventures defines as "strategies that help keep a farm system healthy and resilient in the face

Red Shirt Farm is on the "middle to right end" of the no-till continuum, according to Schultz. The former Taconic High School biology and anatomy and physiology teacher has been farming full-time on more than 10 acres with his wife, Annie, since retiring about four years ago. They produce vegetables; heritage chickens and turkeys; pastured pigs; and honey. In addition to a lot of hand work, they use equipment. One of the pieces is a BCS "walk-behind tractor," which connects to hay-making apparatus and other small items. It is designed for small farms' standard 30-inch beds. Schultz said it's often used on European farms that range from two-to-four acres. He wishes the U.S. had more such farms.

"In my mind, the model is more smaller farms locally, every town having two, three, four farms providing food for that area. In terms of scaling up, that's one way to scale up," he said.

Bantle is excited to be producing food for the community where she was raised; Burnett Farm has been in her family for generations. Full Well Farm is a year-round endeavor. Tarps will continue to cover land during the winter months, killing grass and allowing the microbial life in the soil to flourish underneath. Schultz said it's a highly effective tactic.

"Tarping is a great way to create new ground without having to do a lot of mechanical work, which disrupts the soil," he said.

Bantle had never worked on a no-till farm before. She attended one of the Salinettis' workshops last winter, and Jen stopped by the farm in the fall to offer advice: go smaller, and keep part-time jobs.

"That was the best advice we got," Bantle said.

There was still plenty of back-breaking work to be done on their one-third of an acre growing space, but Bantle and Tupper-Palches' expectation management allowed them to appreciate their first harvest. They sold food at a farm stand and at the North Adams Farmers Market. This season, they're launching a CSA.

"I remember this time last year looking at this and being like, 'Will anything grow here?' You just don't know. It was terrifying; all winter long was just so scary thinking about trying to grow food in this place that hasn't grown food before," Bantle said. "So, it feels really exciting to have done that."