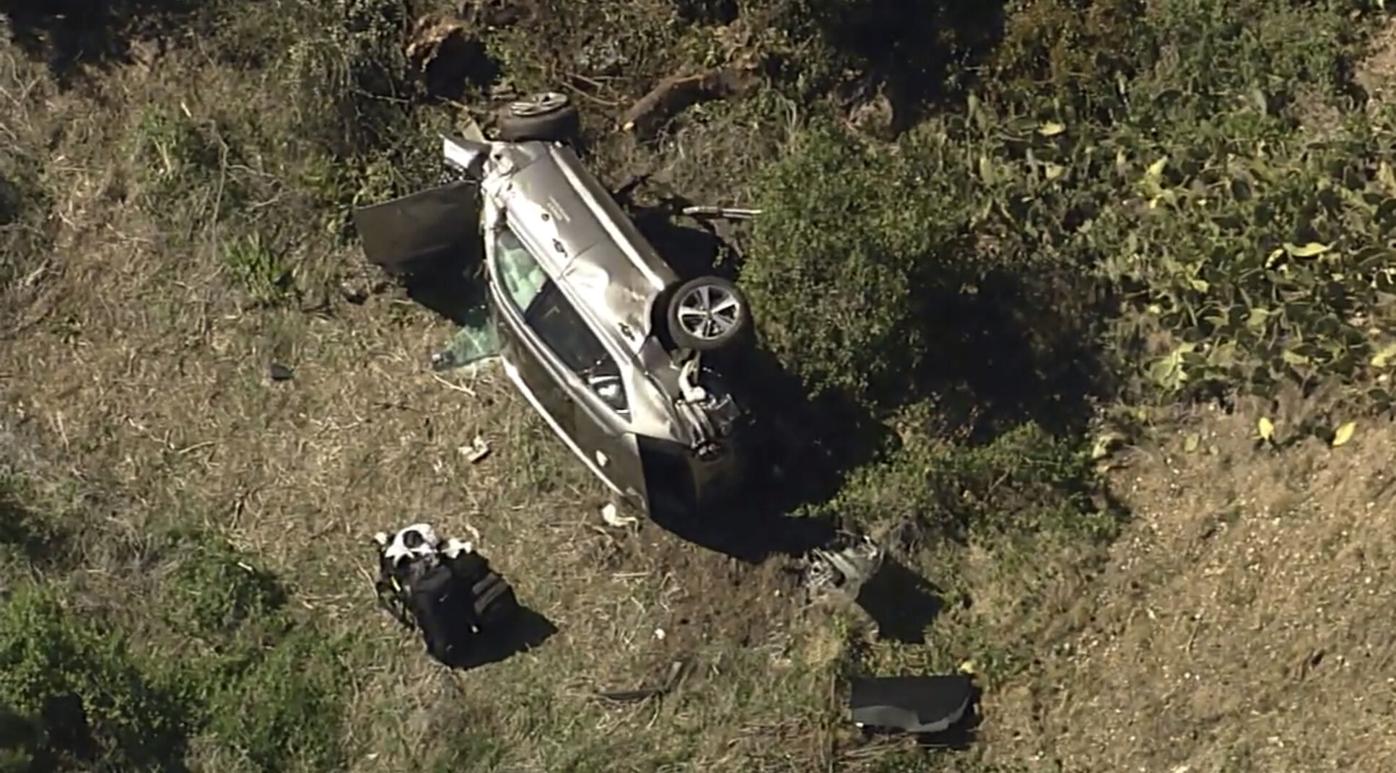 In this aerial image taken from video provided by KABC-TV, a vehicle rests on its side after a rollover accident involving golfer Tiger Woods along a road in the Rancho Palos Verdes section of Los Angeles on Tuesday. 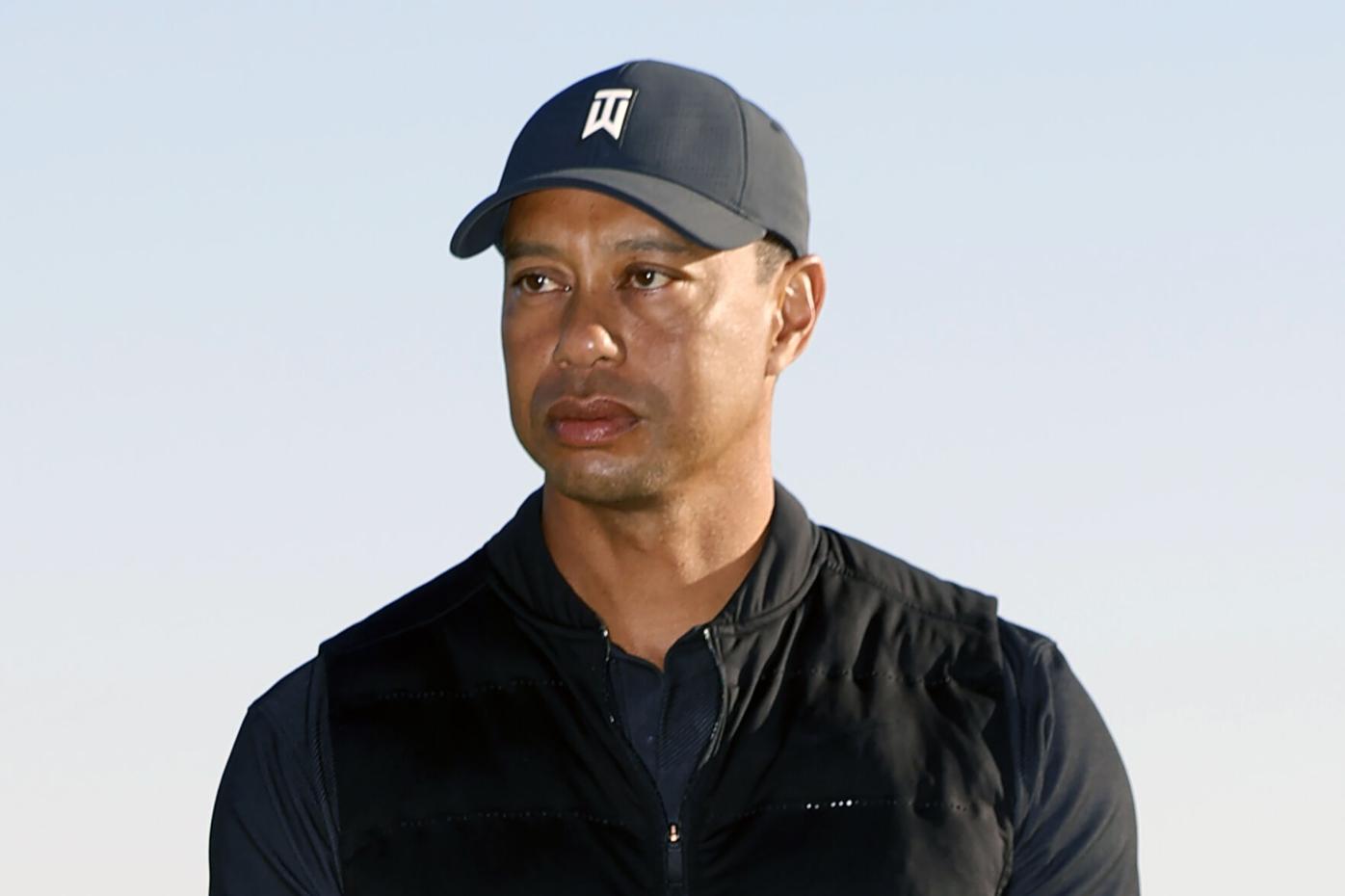 In this aerial image taken from video provided by KABC-TV, a vehicle rests on its side after a rollover accident involving golfer Tiger Woods along a road in the Rancho Palos Verdes section of Los Angeles on Tuesday.

LOS ANGELES — Tiger Woods was seriously injured Tuesday when his SUV rolled over and ended up on its side in suburban Los Angeles, authorities said. The golf superstar had to be pulled out through the windshield, and his agent said he was undergoing leg surgery.

Woods was alone in the SUV when it crashed shortly before 7:15 a.m., the Los Angeles County Sheriff’s Department said in a statement. No other cars were involved. Woods was conscious and alert as firefighters pried open the front windshield to get him out, said Christopher Thomas, a spokesman for the county Fire Department.

The cause of the wreck wasn’t clear. The two-lane road curves through upscale suburbs, and the northbound side that Woods was driving on descends steeply enough that signs warn trucks to use lower gears. The speed limit is 45 mph.

Images showed the SUV on its side, with its front end heavily damaged, just off the side of a road near a hillside. An ambulance took the 45-year-old Woods to a hospital, authorities said.

“Tiger Woods was in a single-car accident this morning in California where he suffered multiple leg injuries,” said his manager, Mark Steinberg. “He is currently in surgery and we thank you for your privacy and support.”

Woods was in Los Angeles over the weekend as the tournament host of the Genesis Invitational at Riviera Country Club, where he presented the trophy on Sunday. He was to spend Monday and Tuesday filming with Discovery-owned GOLFTV, with whom he has an endorsement. A tweet Monday showed Woods in a cart smiling with comedian David Spade.

According to Golf Digest, also owned by Discovery, the TV shoot was on-course lessons for celebrities, such as Spade and Dwyane Wade, at Rolling Hills Country Club.

Woods, a 15-time major champion who shares with Sam Snead the PGA Tour record of 82 career victories, has been recovering from Dec. 23 surgery on his lower back. It was his fifth back surgery and first since his lower spine was fused in April 2017, allowing him to stage a remarkable comeback that culminated with his fifth Masters title in 2019.

He has carried the sport since his record-setting Masters victory in 1997 when he was 21, winning at the most prolific rate in modern PGA Tour history. He is singularly responsible for TV ratings spiking, which has led to enormous increases in prize money during his career. Even at 45, he remains the biggest draw in the sport.

The SUV he was driving Tuesday had tournament logos on the side door, indicating it was a courtesy car for players at the Genesis Invitational. Tournament director Mike Antolini did not immediately respond to a text message, though it is not unusual for players to keep courtesy cars a few days after the event.

Woods feared he would never play again until the 2017 fusion surgery. He returned to win the Tour Championship to close out the 2018 season and won the Masters in April 2019 for the fifth time.

He last played Dec. 20 in the PNC Championship in Orlando, Florida, an unofficial event where players are paired with parents or children. He played with his son, Charlie, who is now 12. Woods also has a 13-year-old daughter.

During the Sunday telecast on CBS from the golf tournament, Woods was asked about playing the Masters on April 8-11 and said, “God, I hope so.” He said he feeling a little stiff and had one more test to see if he was ready for more activities.

He was not sure when he would play again.

Athletes from Mike Tyson to Magic Johnson offered hopes that Woods would make a quick recovery.

“I’m sick to my stomach,” Justin Thomas, the No. 3 golf player in the world, said from the Workday Championship in Bradenton, Florida. “It hurts to see one of my closest friends get in an accident. Man, I just hope he’s all right.”

This is the third time Woods has been involved in a car investigation. The most notorious was the early morning after Thanksgiving in 2009, when his SUV ran over a fire hydrant and hit a tree. That was the start of shocking revelations that he had been cheating on his wife with multiple women. Woods lost major corporate sponsorships, went to a rehabilitation clinic in Mississippi and did not return to golf for five months.

In May 2017, Florida police found him asleep behind the wheel of a car parked awkwardly on the side of the road. He was arrested on a DUI charge and said later he had an unexpected reaction to prescription medicine for his back pain. Woods later pleaded guilty to reckless driving and checked into a clinic to get help with prescription medication and a sleep disorder.

Woods has not won since the Zozo Championship in Japan in fall 2019, and he has reduced his playing schedule in recent years because of injuries. The surgery Tuesday would be his 10th. He has had four previous surgeries on his left knee, including a major reconstruction after he won the 2008 U.S. Open, and five surgeries on his back.