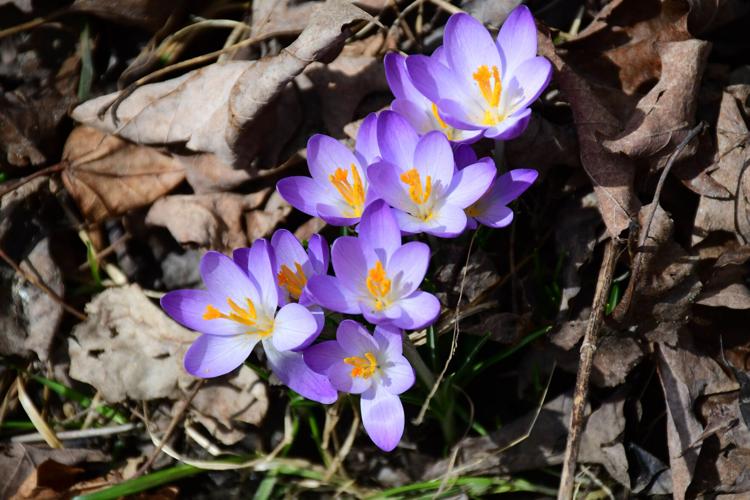 Crocuses come up through the ground surrounded by decaying autumn leaves in a yard in North Adams on a recent day. 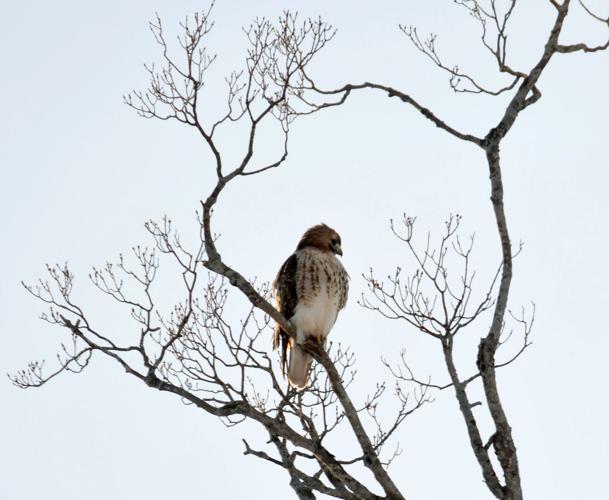 A red-tailed hawk looks down from its perch high in a tree above a field along Henry Wood Road in Cheshire.

Crocuses come up through the ground surrounded by decaying autumn leaves in a yard in North Adams on a recent day.

A red-tailed hawk looks down from its perch high in a tree above a field along Henry Wood Road in Cheshire.

“The sun is shining brightly, and its playful, beaming rays are bathing in the puddles along with the sparrows. The river is swelling and darkening; it has already woken up and very soon will begin to roar. The trees are bare, but they are already living and breathing.”

Morning birdsong and evening peepers are in full-throated volume, golf courses are greening up, daffodil shoots are sprouting, bears are foraging to break their wintertime fast and hawks are circling, seeking easy prey.

That’s all as it should be in mid-April. But where’s any warmth that lasts more than a day?

Sunday’s raw chill was a reminder that spring takes its sweet time to reach New England. But the week ahead looks encouraging, with temperatures rebounding well up in the 50s on Monday, then rising steadily through the 60s during the week, reaching 70 by Friday.

Still, April showers will be lurking from time to time, especially later in the week — “changeable and unsettled conditions,” as described by the National Weather Service forecasters in Albany, N.Y.

Despite the powerhouse storm system developing over the upper Midwest, any showers and thunderstorms here in the Berkshires should be occasional as warmer air surges into the region. The likeliest chance for thundershowers is on Thursday, as the leading edge of somewhat cooler air advances eastward.

Next weekend, with Good Friday, Passover and Easter Sunday on the calendar, is a big question mark since there’s an outside chance of steady rainfall starting Saturday night.

The Climate Prediction Center’s outlook for April 17-23 indicates temperatures slightly below normal in western New England, while rainfall should be near normal. Historical averages at Pittsfield Municipal Airport’s government observation station range from daytime highs in the upper-50s to predawn lows in the mid-30s.

The week’s weather will be active in the western states, while it’s relatively tranquil in the East.

By Monday night a sizable storm will begin to impact the West with strong winds and heavy rain, especially northwest California and western Oregon, and in the Cascades and northern Rockies, plenty of snow.

Heavy snow and strong winds will move into the Northern Plains on Tuesday, with over a foot of snow in eastern Montana and western North Dakota. That potent storm will bring blizzard conditions across the Northern Plains on Wednesday, with heavy rainfall and severe weather from the Gulf Coast to the mid-Mississippi Valley. Rainfall may linger through Friday across the Southeast.

Temperatures will be far below normal in the Pacific Northwest early in the week, with the pattern shifting eastward into the Northern Plains by next weekend. The chill will ease by later in the week across the West, though readings will remain below normal. Look for temperatures from the south-central U.S. to the East to be above average, but moderating by Saturday.

Southern Florida will experience sunshine and highs from the upper 70s to low 80s for the first half of the week, turning showery from Thursday into the weekend. From Tampa-St. Pete to Naples on the Gulf Coast, sun prevails, with highs well up in the 80s.

The Carolinas should see lots of sun with highs in the 70s until clouds and showers move in from Thursday into Saturday.

Here’s a surprising supply-chain disruption: Because of hydrogen and helium shortages, the National Weather Service has cut back on weather balloon launches at nine of its 101 sites, including Albany, N.Y. That’s the forecast office responsible for covering Berkshire County, southern Vermont, northwest Connecticut and much of upstate New York — 19 counties in all.

The move is likely to impact forecasting for much of New York and New England, since other sites affected include Upton, N.Y., 50 miles east of New York City. The Chatham site on Cape Cod has been closed because of erosion, and the opening of a new location on the cape has been postponed.

Government spokespeople indicate that other data from balloon sites that remain open, as well as ground-based sensors and satellites, will limit the effects on forecasting accuracy. But old-tech balloons, used by government meteorologists since the 1930s, can relay observations from an instrument package called a radiosonde up to 20 miles above the earth’s surface.

Independent experts are cautioning that any reduction in observations contribute to significant gaps in forecast data.

At Columbia University, atmospheric scientist Adam Sobel told The New York Times that while the weather service was facing a “tough situation,” he did not find their statement that there would be no impact on forecasts credible.

“The N.W.S. claim that the loss of several radiosonde stations in a high-population region has no impact on the forecast was accompanied by no supporting evidence,” he said.

Susan Buchanan, a National Weather Service representative, acknowledged that “we take this situation seriously and are pursuing all avenues to resolve it.”

“The upper air observing program remains a key contributor to our analyses, model data assimilation, and for our forecasters’ situational awareness,” she told The Times.

Weather balloons, about 5 feet in diameter when launched, carry a radiosonde that gathers data on temperature, pressure and relative humidity from the upper atmosphere. The balloon eventually bursts and the instrument package descends by parachute to the ground, where it is recovered and analyzed.

Balloons are used around the world and are usually launched twice daily, 12 hours apart. The data is fed into computer models that provide short- and longer-term weather forecasts, and also becomes part of databases used in weather and climate research.

Among the past week’s other major stories on the climate beat:

• One in three Americans say they have personally been affected by an extreme weather event in the last two years, according to a new Gallup poll — a period that included paralyzing ice storms, droughts, massive wildfires, destructive and deadly tornado outbreaks and powerful hurricanes.

• Global warming is greatly increasing the risk that extreme wildfires in the Western states will be followed by heavy rainfall, highlighting the need to be prepared for mudslides and flash floods after the flames from severe blazes are doused.

• If nations act promptly, the devastation from climate change can be limited. That’s the bottom-line finding of a widely publicized report from the U.N. While meaningful action won’t be easy, the report warned that the margin for error is vanishingly small and that countries, including the U.S., are not yet doing nearly enough.

• For the first time since satellites began monitoring Antarctica in the 1970s, a 450 square-mile ice shelf has collapsed on the eastern part of the continent.

Material from The New York Times was included in the Climate Update. The Outlook is today's look ahead at the week's weather, its impact on the Berkshires and beyond. Beginning next Saturday, The Outlook will appear in the weekender print edition and online at berkshireeagle.com. Clarence Fanto can be reached at cfanto@yahoo.com.