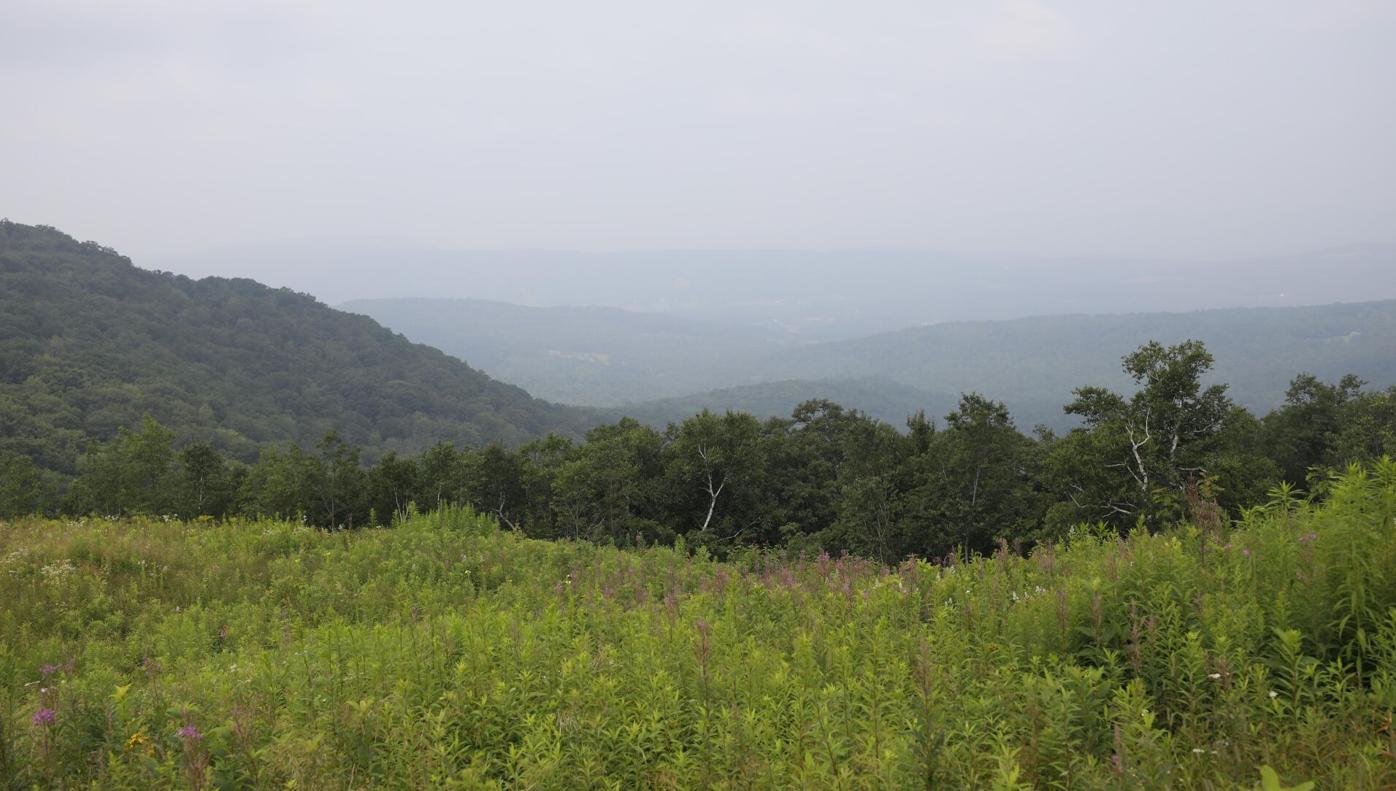 The haze covering the region, as seen looking west from the hills of Pittsfield State Forest, is caused by smoke from devastating fires in the western U.S. and Canada. 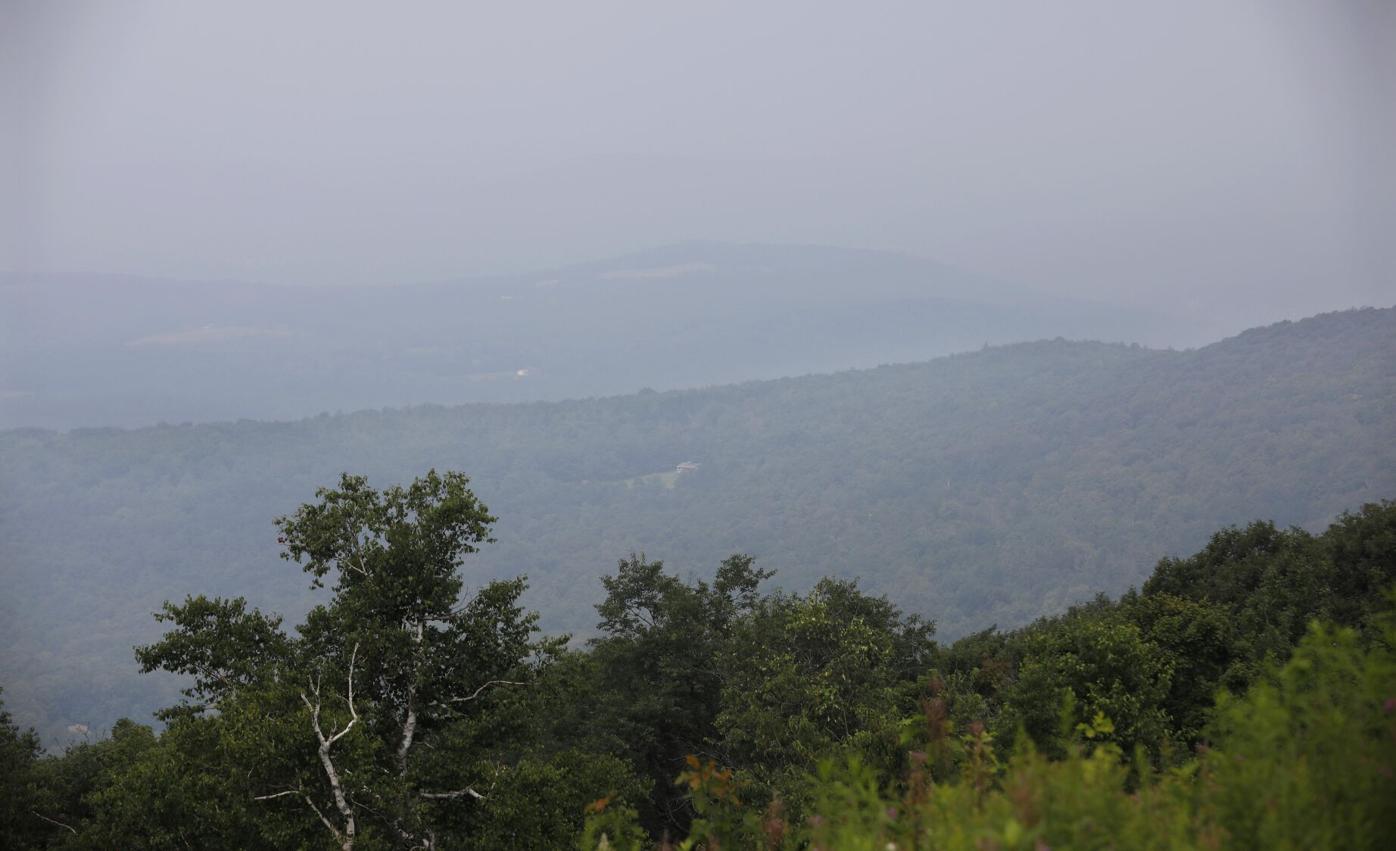 The haze covering the region, as seen looking west from the hills of Pittsfield State Forest, is caused by smoke from devastating fires in the western U.S. and Canada.

A foglike haze has descended on the Berkshires and is affecting air-quality levels throughout the county.

The culprit? The massive wildfires out West and in Canada, which have burned hundreds of thousands of acres and raged for weeks.

Some of the smoke from those fires has drifted to New England, and on Tuesday the state Department of Environmental Protection issued an air-quality alert for Western Massachusetts. The smoke has led to elevated levels of fine particulate matter in the air, and that could impact people with respiratory problems, according to Michael Main, meteorologist with the National Weather Service in Albany, N.Y.

#AirQuality Alert: Significant smoke plume from US & Canadian #wildfires has moved over NE, causing fine particle levels to elevate into Unhealthy for Sensitive Groups range today in all MA counties except the Cape & Islands. Details at MassAir Online https://t.co/Ix2heDE1Dl

An air-quality alert also has been issued for most of New York, as well as for portions of Vermont and Connecticut.

"We can expect hazy skies through most of the day [Tuesday]," Main said.

A cold front is expected to move through the area Tuesday night, and that means the haze could start clearing up as soon as Wednesday, Main added.

Seeing smoke drift into New England from wildfires in the western U.S. during the late summer and early fall is not unusual. But, what sets this weather event apart from others is the thickness of the smoke, Main said.

"People in sensitive groups should reduce prolonged or heavy outdoor exertion; take more breaks and do less intense activities, and follow asthma action plans and keep quick relief medicine handy. Watch for symptoms such as coughing or shortness of breath."

According to an online post from AccuWeather.com, the smoke has spread up to 2,500 miles downwind of the wildfires.

"Due to the fact that smoke particles are small and light, they can be transported hundreds if not a few thousand miles away from their source," said meteorologist Alex DaSilva. "While the smoke is not thick enough to obstruct surface visibility, it is thick enough to create poor air quality in some areas and allow for vibrant sunrises and sunsets."

Wildfire smoke consists of gases and fine particles from burning trees, plants, buildings and other materials, according to the Centers for Disease Control and Prevention. Anyone can get sick from inhaling the smoke, but people with asthma, chronic obstructive pulmonary disease, heart disease, children, people who are pregnant, and first responders are at particular risk.

Breathing in the smoke from a wildfire can cause an array of immediate effects, including breathing troubles, stinging eyes, scratchy throat, runny nose and sinus irritation, headaches, tiredness, chest pains and an increased heartbeat, the CDC advised. Breathing in smoke also can trigger asthma attacks.

"Elderly individuals and people who may have breathing problems should try to avoid long periods of outdoor activity," DaSilva said, but overall most people in the Northeast won't be at risk.

"The smoke out West is a lot closer to the ground because that’s where the fires are," he explained. "It's more of a health concern out there."

He said the sky might look "dirty" at some points as the smoke moves through the region, but overall it will not be of concern for most individuals in terms of posing respiratory risks.

Smoky skies might concern people in the Northeast who are not accustomed to the phenomenon, but overall, it will not be of major concern to most residents in the region the same way it is across the western U.S., because the smoke reaching the Northeast is much higher in the atmosphere.

By Wednesday, a cold front moving into western New England from Canada should clear out some, if not all, of the haze.

With five dozen large and uncontained wildfires, the national preparedness level in the U.S. is at 5, which is the top of the scale and means the nation is at the highest level of wildfire activity and firefighting resources are at risk of being exhausted, according to the National Interagency Fire Center.

Smoke from Western wildfires is creating haze in the Berkshires. How long will it last?

A foglike haze has descended on the Berkshires and is affecting air-quality levels throughout the county.