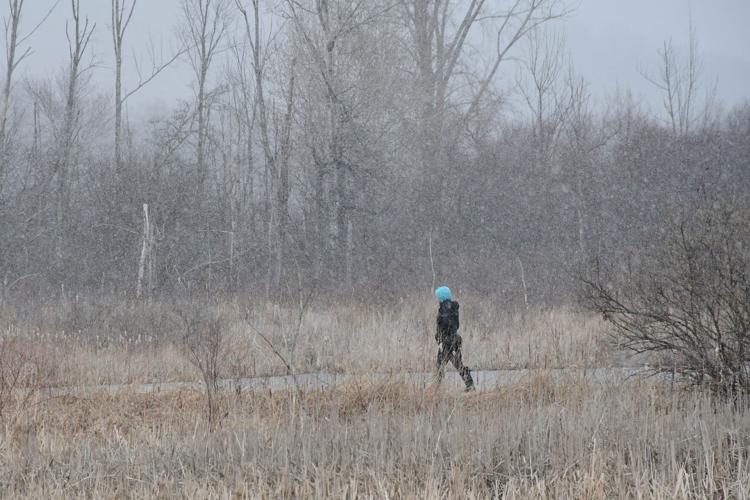 A person walks in a snow squall at Field Farm in Williamstown on Sunday. 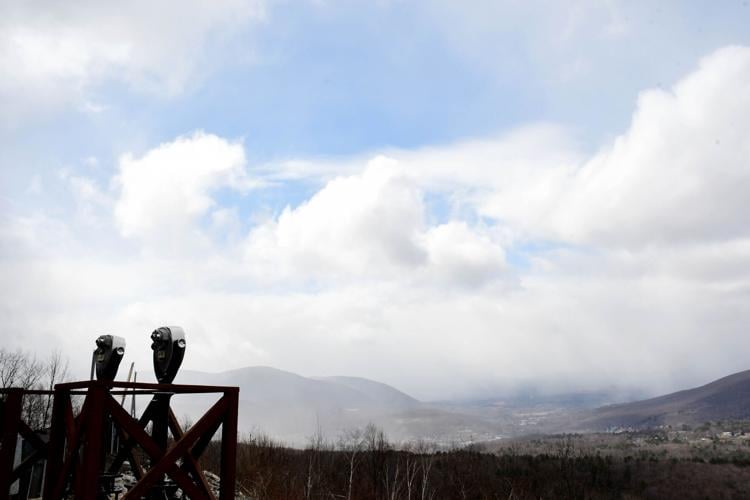 A view looking west from the Hairpin Turn in Clarksburg on Sunday, as cold weather moves into the region bringing with it unseasonably cold temperatures.

A person walks in a snow squall at Field Farm in Williamstown on Sunday.

A view looking west from the Hairpin Turn in Clarksburg on Sunday, as cold weather moves into the region bringing with it unseasonably cold temperatures.

“Spring drew on...and a greenness grew over those brown beds, which, freshening daily, suggested the thought that Hope traversed them at night, and left each morning brighter traces of her steps.”

With the first day of April just a few days away, it’s fair to say we’ve all been fooled already by the premature samples of spring earlier this month.

The March high of 69 on the 18th was 27 degrees above the normal maximum for the date. Even more remarkable was the 62 recorded on March 6. For the month so far, highs above 50 occurred on eight days. Only 9 inches of snow fell up to Sunday afternoon, far below the March average of 15 inches.

Now, with early-morning lows of only 15 predicted for Monday and Tuesday, and highs in the mid- to upper-20s, we’re back in the grip of the dreaded polar vortex. Mercifully, the intrusion of Arctic air will be fairly brief, as temperatures should moderate closer to normal by mid-week — upper 20s to upper 40s.

But for now, as you may awaken Monday to a coating of white across the landscape, it feels like a replay of mid-January, especially with strong, biting wind chills near zero.

The ghost of winter past, not far past, may be hovering over the Northeast, but, as AccuWeather.com points out, the clock is ticking as days lengthen, the angle of the sun is higher, and April showers are due at the end of this week.

The government’s Climate Prediction Center is more optimistic, signaling temperatures near to slightly above normal for the first week of April, with rainfall also near normal.

After an “incredibly dry” March thus far, AccuWeather.com reports, parched areas along the West Coast and in the Southwest are being soaked by widespread showers and some steady rain from Oregon and California to western Arizona.

Well above-average to record-breaking temperatures continue across the Southwest as well as in the Southern Plains (where there’s a critical fire risk) early this week, with far below-average temperatures from the upper Midwest to the Northeast and Mid-Atlantic states.

An intensifying system is expected to yield downpours and severe storms across the South on Wednesday, moving into the Southeast and Mid-Atlantic states on Thursday, along with the prospect of snow, ice and strong winds across the upper Midwest and Great Lakes region.

By next weekend, heavy rainfall is shaping up for the central and eastern Gulf Coast states and the Southeast.

Southern Floridians should enjoy sunshine and clear nighttime skies through the week, with highs from 80 to 85, while the Gulf Coast from Naples north to Tampa-St. Pete will be mostly fair with highs 85 to 90 and thunderstorms possible on Friday.

The Carolinas will be partly cloudy, warming from the mid-60s to mid-70s by mid-week, followed by showers and thunderstorms from Thursday into next weekend, with highs 70-75.

Ticks seem to be everywhere and allergy sufferers are already sneezing and sniffling earlier than usual. A report in the Boston Globe, citing the journal Nature Communications, focuses on the rapidly warming Gulf of Maine, where sea temperatures are rising faster than anywhere else in the world.

Richard B. Primack, a biology professor at Boston University who focuses on climate change, said the new study’s findings should come as no surprise. “Plants are responding by flowering earlier,” he said. “So of course, pollen season is coming earlier than it did in the past.”

If greenhouse gas emissions grow at the current rate, the study’s authors found that eventually, allergy season could begin several weeks earlier. Longer summers could also cause some plants — including ragweed, which is common in Massachusetts — to release pollen for 19 extra days.

Milder winters, earlier springs, and wetter conditions are creating a perfect environment for ticks, which carry Lyme disease. They’re breeding, developing, and growing in population earlier in the year, and they’re also spreading northward into areas that used to be too cold for their liking, research shows.

As the climate changes, a new kind of tick, known as the Lone Star tick, has also spread into New England, said Larry Dapsis, entomologist for the Cape Cod Cooperative Extension.

“It’s a function of climate change,” he said. “The earth is getting warmer, and we’re seeing plants and animals where we never used to see them before. This is a great example of that.”

Cases of tick-borne Lyme disease have been trending upward for years. Federal data isn’t available for Massachusetts because state officials have altered their reporting methods, but EPA numbers show that Maine and Vermont have experienced the largest increases in reported case rates, with New Hampshire close behind.

“The incidence of Lyme disease has really increased dramatically over the last several decades in New England,” Primack said.

Information from the Boston Globe was included in the Climate Update.