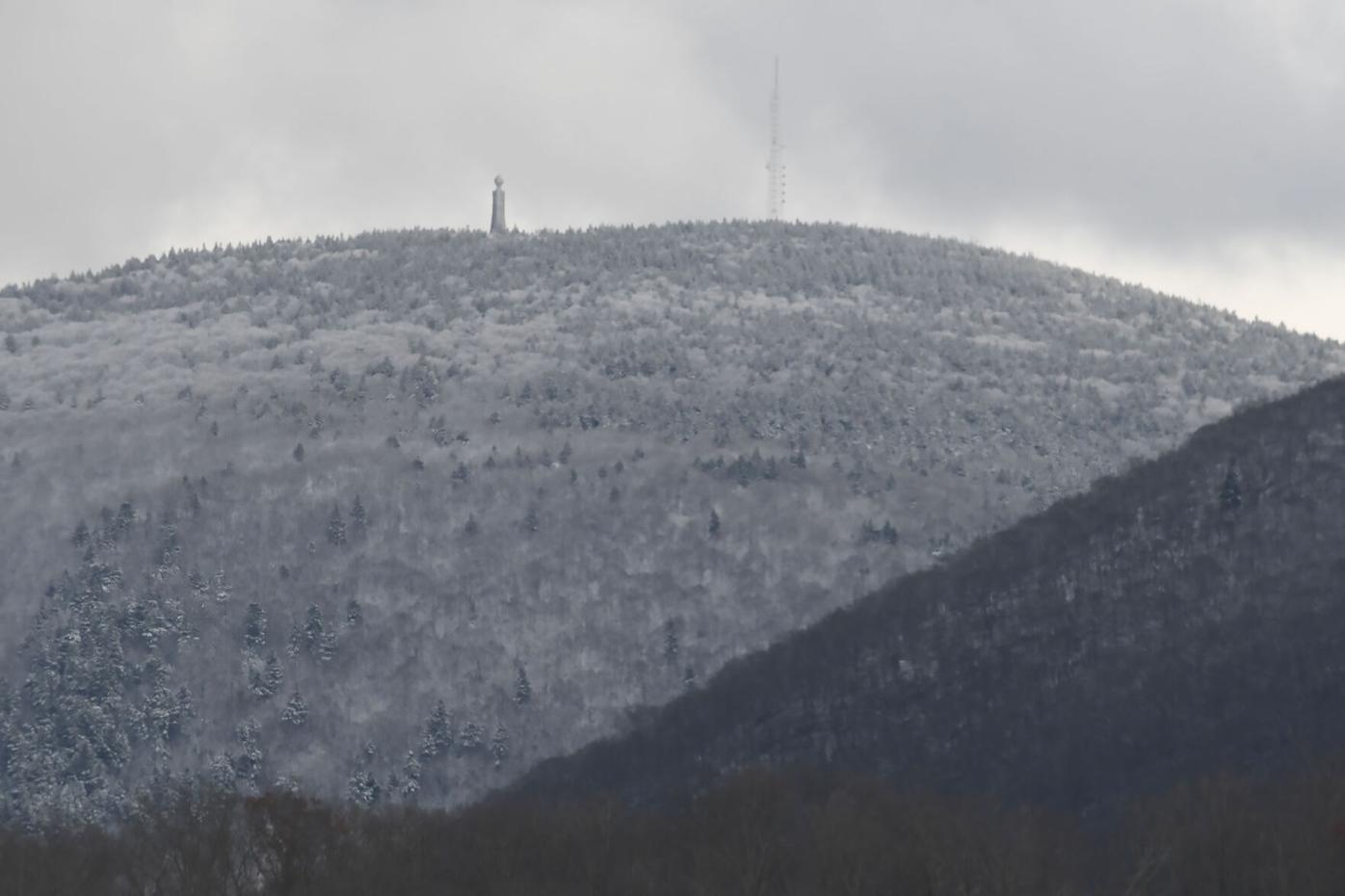 The higher elevations of the area got some snow this weekend, including the summit of Mount Greylock, as seen from Route 7 in Williamstown on Sunday. The week ahead should be on the chilly side, but no significant precipitation is expected. 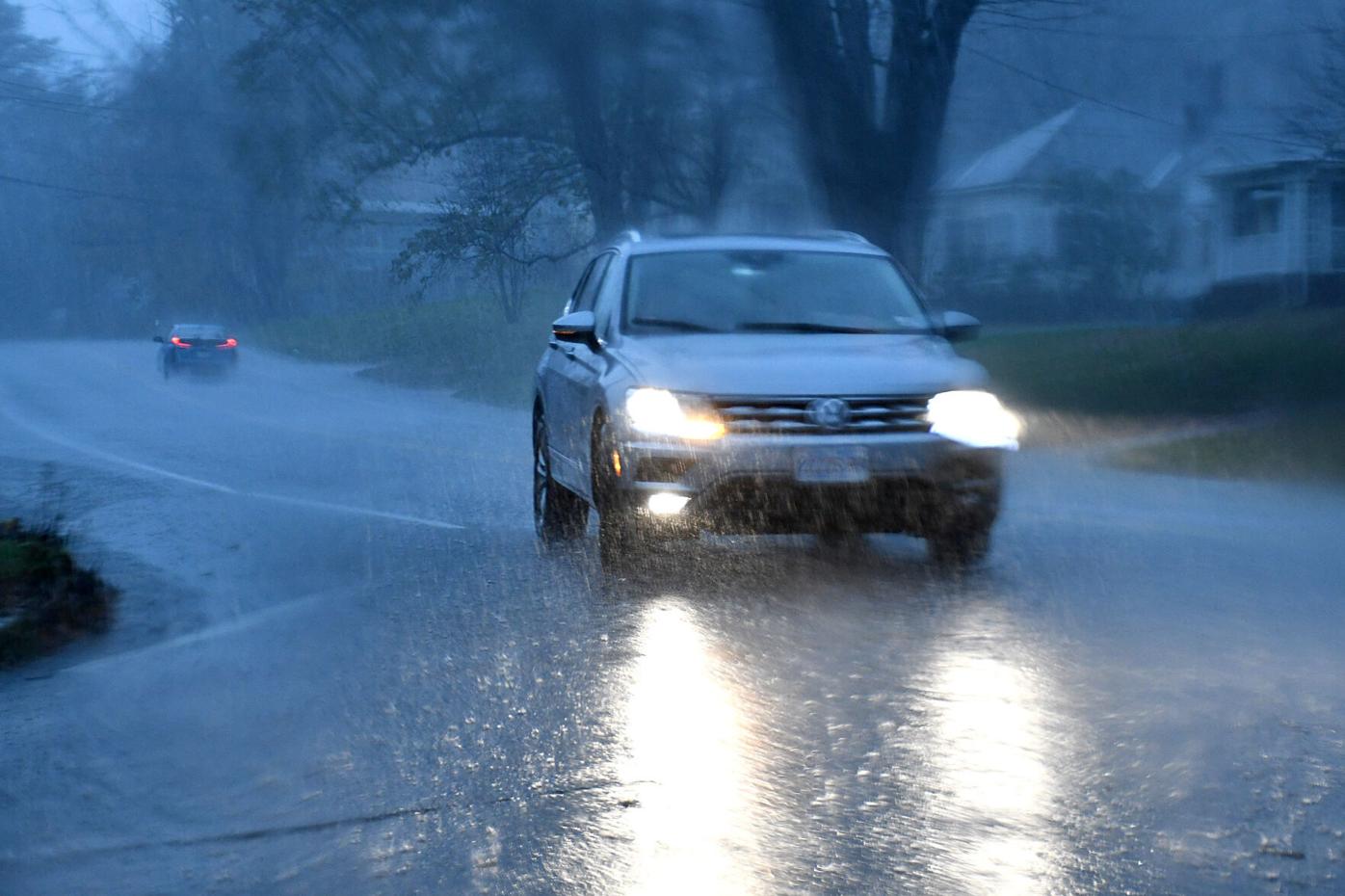 A car turns onto Protection Avenue from Massachusetts Avenue in North Adams on Friday during a torrential rainstorm which brought flash flooding to roadways in the region. Friday's storm was the first significant rainfall for the month, and should remain the only serious downpour we see through at least this week.

The higher elevations of the area got some snow this weekend, including the summit of Mount Greylock, as seen from Route 7 in Williamstown on Sunday. The week ahead should be on the chilly side, but no significant precipitation is expected.

A car turns onto Protection Avenue from Massachusetts Avenue in North Adams on Friday during a torrential rainstorm which brought flash flooding to roadways in the region. Friday's storm was the first significant rainfall for the month, and should remain the only serious downpour we see through at least this week.

“How I wish to fly with the geese away from dreary November days, the ‘freeze-up,’ and cruel winter. Away from loneliness, isolation, and anxiety bred by blizzards. Most every local person I've talked to grudgingly admits to an autumn apprehension. The geese contaminate us with this strange depression on their southbound flight and cure us with their northbound. In between, we try to tolerate winter, each in his or her own way.” Anne LaBastille, ("Woodswoman I: Living Alone in the Adirondack Wilderness," 1976)

The first weeks of November were unusually tranquil in the Berkshires, with temperatures averaging close to normal and no rainfall until Friday. The week ahead follows a similar, though not as dry, pattern.

Heading into the weekend, two storms spawned by the clash of advancing cold air with relatively mild temperatures dumped heavy rain on the county. A one-hour deluge around midday Friday, accompanied by fierce winds, was followed by a more prolonged, less intense rainfall on Saturday, although thunderstorms, very unusual for November, also raked central and southern portions of the county.

The storms were more severe just to our south. On Saturday, northern New Jersey and the New York City area were pelted by hailstones, some up to a half-dollar size, AccuWeather.com reported. Strong winds caused downed trees and power lines. Tornado warnings, very rare in late autumn, were posted for parts of Long Island, N.Y., as well as eastern Massachusetts and even Nantucket, but no funnel clouds reached the ground.

On Monday, look for a chilly, mostly cloudy and blustery day in the Berkshires with possible rain and/or snow showers, especially in North County. Winds could gust to around 30 mph. At night, any showers should end, with partly cloudy skies and lows from 25 to 30.

For Tuesday and Wednesday, another dry spell is shaping up, with temperatures typical for mid-November, topping out in the 40s, followed by nighttime lows in the mid-20s. A chance of rain showers is predicted on Thursday along with a warmup into the mid-50s, followed by a return to chillier weather by next weekend.

Thursday: Partly cloudy, showers possible, mid-50s, dropping to upper 20s at night with a chance of rain or snow showers.

No significant storms are in sight over the next seven days.

The Climate Prediction Center’s outlook for Nov. 21-27 (Thanksgiving week) calls for near-normal temperatures in New England, with precipitation slightly above normal. Historical averages recorded by the National Weather Service at Pittsfield Municipal Airport for that period range from highs in the mid-40s to overnight lows in the mid-20s.

Daylight shrinks to 9 hours, 30 minutes, with sunup at 6:55 and sundown at 4:25. Sunrises (southeast view, starting 6:30) and sunsets (southwest view, starting 4:15) can be especially spectacular on the right day.

Once again, the Pacific Northwest is seeing heavy rain and mountain snow, though confined to Washington state. A strong storm will spread mountain snows and high winds across the northern Rockies to northern High Plains Monday night into Tuesday.

The season’s first significant “Alberta Clipper” is moving offshore from Maine after dropping a mix of snow and rain from the upper Midwest through the Great Lakes and northern New England.

These fast-moving winter weather systems develop in the province of Alberta in the Canadian Rockies. They get their nickname because the storms quickly clip across the northern tier of the U.S., similar to how fast 19th-century sailing ships known as “clippers” sped across the seas.

While much chillier temperatures will replace above-normal readings during the first half of the month in the Northeast, the entire western U.S. will remain milder than normal as the week begins.

By Thursday, an intensifying storm is expected to develop in southern Canada, sweeping into the Plains next weekend and then trekking eastward early next week. At this time, it’s too early to predict the impact on pre-Thanksgiving travel in the Northeast.

After several days of sunshine, Southern Florida is likely to see rainfall late this week, especially along the Atlantic coastline. Daytime highs are forecast to reach the 70s, with nighttime lows 60-65. The Carolinas will be mostly sunny, with highs in the 60s and nighttime lows in the upper 40s and low 50s.

Next weekend, most of the nation should feel seasonably chilly temperatures for late November after a brief mid-week warmup over the South and the East.

After two weeks of talks in Glasgow, diplomats from almost 200 countries have agreed to ramp up their carbon-cutting commitments, phase out some fossil fuels and increase aid to poor countries on the front lines of climate change. But as the Washington Post reported, the deal doesn’t offer the transformative breakthrough scientists say must happen if humanity is to avert disastrous planetary warming.

Advocates of strong action to attack climate change are bound to be disappointed by the outcome of the Glasgow summit.

But the strong winds of climate change have failed to move the opinions of many Americans. Most believe global warming is a problem, but the partisan divide is growing, even as windstorms became more powerful, wildfires grew more deadly and rising seas made damaging floods more frequent.

A clear majority of adults say that warming is a serious problem, but the share — 67 percent — is about the same as it was seven years ago, when alarms raised by climate scientists were less urgent, according to a Washington Post-ABC News poll just released.

The proportion of Democrats who see climate change as an existential threat rose by 11 points to 95 percent since 2014. The increase was driven partly by Black Americans, who now are more likely to say the issue is very serious.

Meanwhile, the share of Republicans who view climate change as a serious problem fell by 10 points, to 39 percent, over the same period. That decline aligns with annual Gallup polls in which Republican concerns dropped after 2017, when Donald Trump was inaugurated as president. In that year, 41 percent of Republicans told Gallup they believed warming had already begun. But this year, 29 percent expressed that belief.

It’s settled science that human activity is fueling a dangerous greenhouse gas effect that is melting icebergs, increasing the rate of punishing storms in some parts of the world while intensifying drought in others. At least three Pacific islands are being engulfed by sea level rise, forcing inhabitants to flee. Native American homes, sacred lands and even gravesites are being washed away in places such as Alaska and Louisiana, while polar and sub-Arctic ice caps are melting.

The Post-ABC News poll found that among Democrats, 95 percent say climate change is serious and 75 percent say the problem is urgent. Nine in 10 Democrats state that greenhouse gas regulation is needed to deal with the issue.

However, a 56 percent majority of Republicans contended that climate change is not a serious problem. About 4 in 10 describe it as serious or very serious and, separately, 19 percent say it is urgent. About 7 in 10 Republicans say climate change is a longer-term problem that requires more study before government action is taken.

Americans most impacted by pollution and climate change, but who contribute to them the least, are more likely to say it is a serious problem that must be dealt with. Among Blacks, 93 percent say the issue is serious, and 72 percent of Hispanics agree. That compares to 60 percent of White Americans.

The Outlook is today's look ahead at the week's weather and climate, its impact on the Berkshires and beyond. Clarence Fanto can be reached at cfanto@yahoo.com.