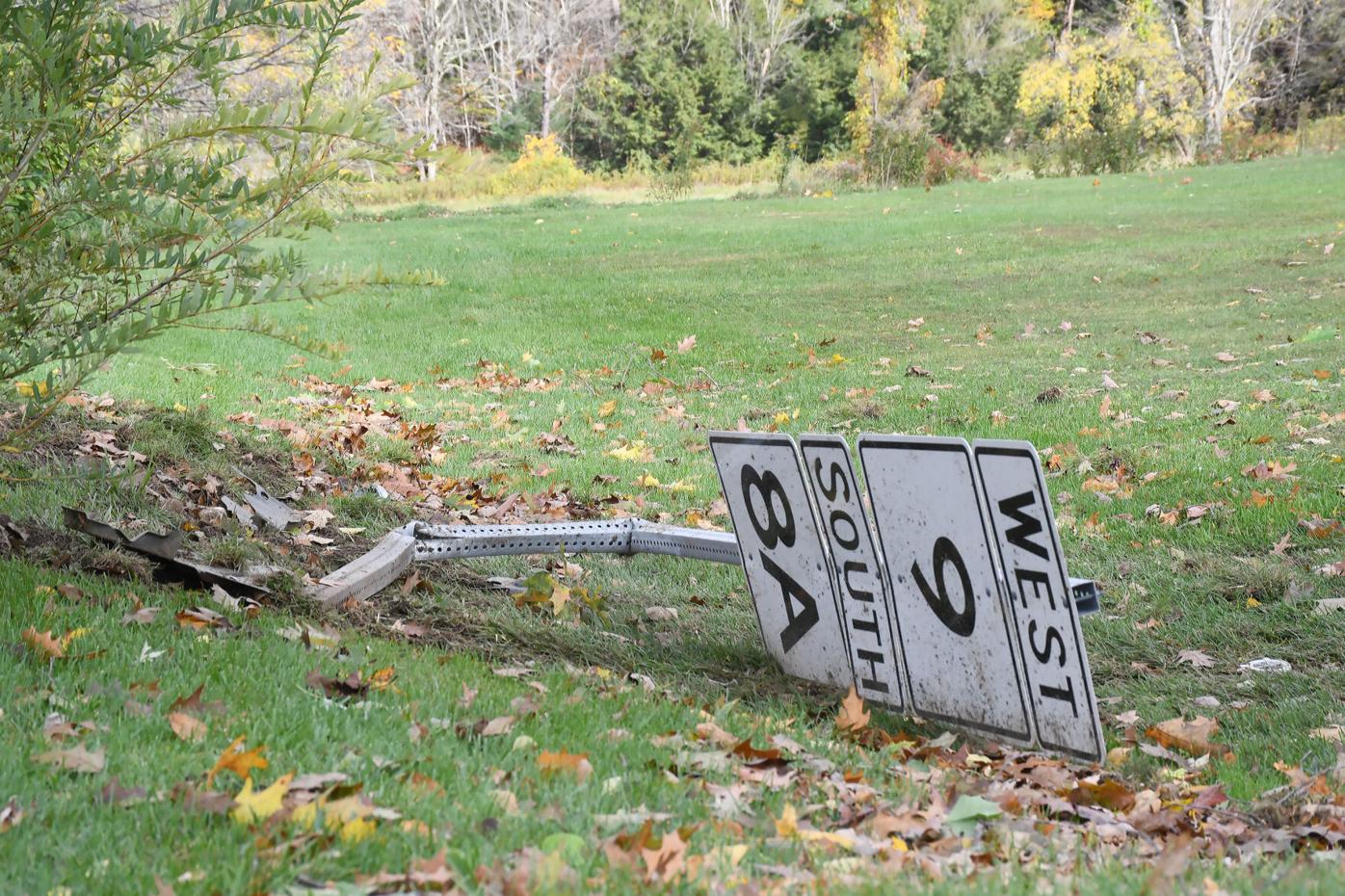 A mangled road sign sits in a yard along Route 9 in Dalton on Sunday following high winds on Saturday night. 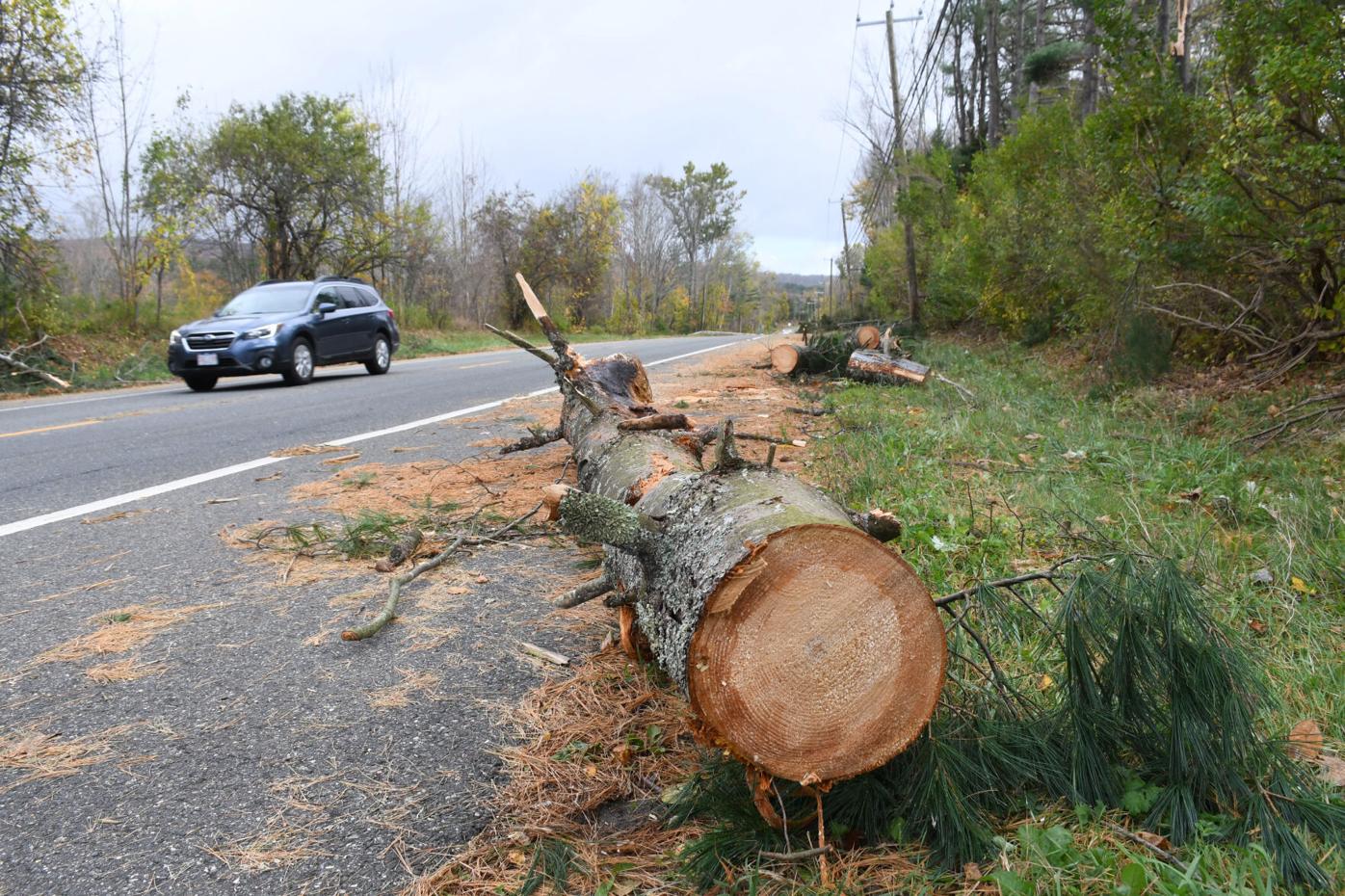 Tree debris sits on the road along Route 9 in Dalton on Sunday following high winds on Saturday night. 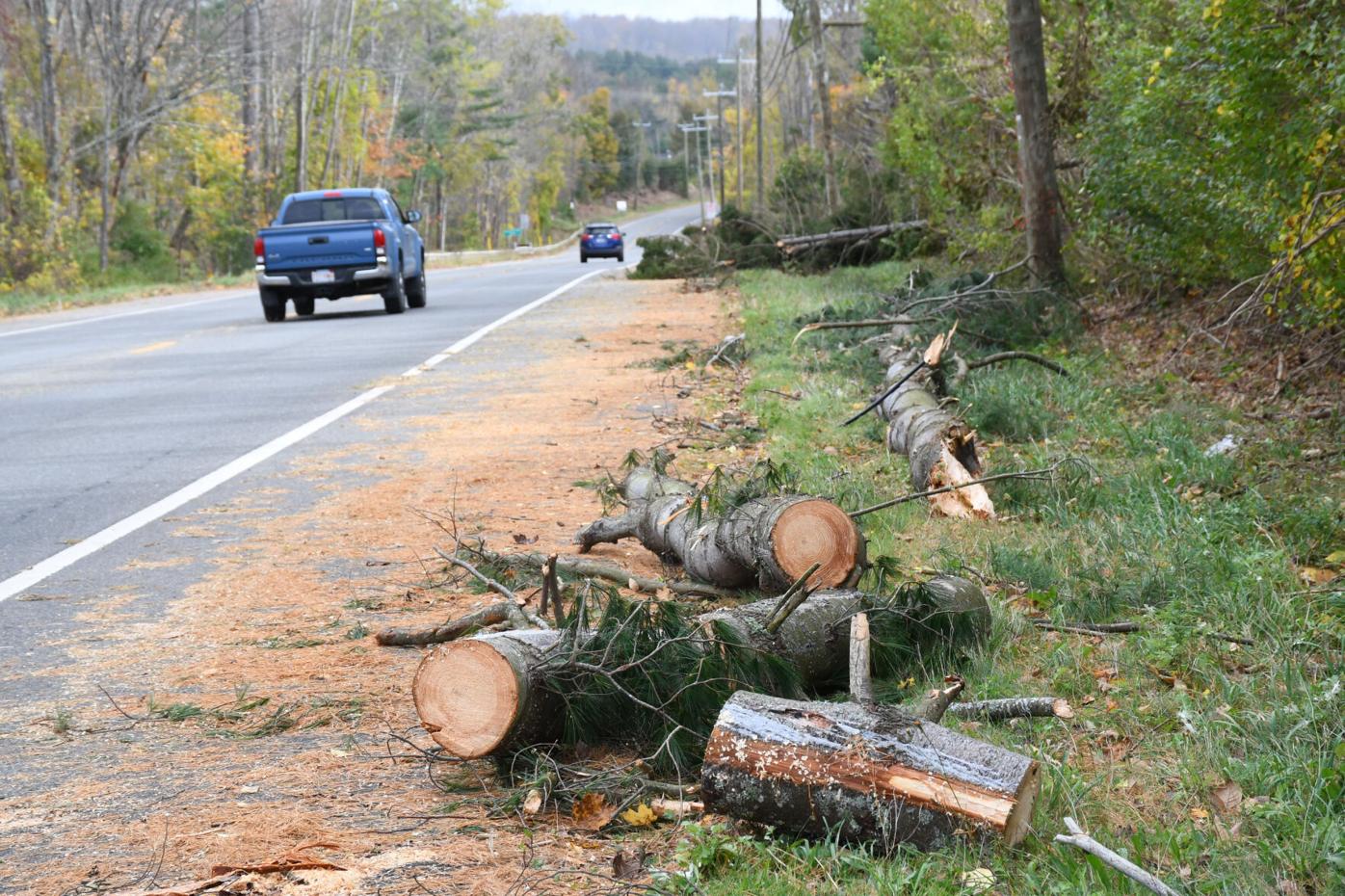 Tree debris sits on the road shoulder along Route 9 in Dalton on Sunday following high winds on Saturday night.

A mangled road sign sits in a yard along Route 9 in Dalton on Sunday following high winds on Saturday night.

Tree debris sits on the road along Route 9 in Dalton on Sunday following high winds on Saturday night.

Tree debris sits on the road shoulder along Route 9 in Dalton on Sunday following high winds on Saturday night.

“It is dry and cool and the land is wild with red and gold and crimson, and all the lassitudes of August have seeped out of your blood, and you are full of ambition. It is a wonderful time to begin anything at all.” — Thomas Merton (“The Seven Storey Mountain,” 1948 autobiography)

What a difference a day makes.

After two weeks of unusually mild, and at times humid, air over Berkshire County and the surrounding region, a strong cold front punched through the region around sunset Saturday, dumping just over an inch of rain and sparking electrical storms, unusual for mid-October.

The most severe thunderstorm, with wind gusts over 30 mph, moved swiftly over Pittsfield, intensifying as it raced through Dalton, Windsor, Hinsdale and Savoy. The National Weather Service issued a rare tornado warning for those towns around 6 p.m. Saturday, but we’ve seen no reports of a funnel reaching the ground.

But branches and wires came down, according to social media and amateur radio reports, and Route 9 between Dalton and Windsor was closed for a time because of multiple downed trees.

The morning after dawned clear and crisp with a seasonable chill in the air, back to normal for the season. If we ever saw a fall-foliage peak, it’s quickly passing now and trees are losing most of their leaves, especially in the higher elevations.

Friday: Partly cloudy, chance of showers, mid-50s, near 40 after midnight.

Although no significant rainstorms are in sight for the week ahead, occasional showers could pop up, especially toward the end of the week. Skies will be partly cloudy, but the sun will break through day to day.

Temperatures will be close to normal, upper 30s to upper 50s, but no frost on the pumpkin is expected. Monday should be the chilliest day since late May, but it will turn milder by mid-week.

Heading into the weekend, another cooling trend is likely as chances for showers increase. Temperatures should fall below normal on Saturday and Sunday, with plenty of clouds.

The extended outlook for western New England through Oct. 30 from the Climate Prediction Center indicates temperatures slightly above normal as Halloween approaches, and rainfall near normal.

Daylight has dropped below 11 hours, with 7:15 sunrises and 5:58 p.m. sunsets by the weekend. Those craving earlier dawn will have to wait for the return of standard time on Nov. 7.

After a remarkably warm first half of October east of the Mississippi River, autumn has finally made its long-awaited appearance across the South and along the East Coast. But the Midwest and Plains will return to abnormal warmth this week, with highs in the 70s to low 80s. The West Coast joins the East Coast with much cooler temperatures than their neighbors in the Heartland.

A fairly typical late October weather pattern is expected later this week for most of the nation. But northern California to Washington will be drenched with 2 to 5 inches of rain as multiple storm systems arrive from the Pacific Ocean. By next weekend, much-needed rainfall may extend to the San Francisco metro area, with another round of strong winds.

Temperatures will be cooler than normal along the West Coast, while the nation’s mid-section cools off before readings rebound by next Sunday. East of the Rockies, rainfall will be below average except for Florida, where early-week sunshine will be replaced by frequent showers beginning Thursday while highs remain in the low-80s.

— California saw its driest summer on record since 1895, when drought index data-gathering began. The state is in an extreme drought, as measured by the Palmer Index, the most widely used U.S. database tabulating precipitation, temperature and the amount of soil moisture.

So far this year, Gov. Gavin Newsom has declared a drought emergency for 50 of California’s 58 counties, including eight in the San Francisco Bay Area. Parched land and vegetation contributed to the statewide explosion of wildfires.

— England will suffer devastating floods like the ones that submerged parts of Germany this summer if the country fails to protect itself against more severe weather brought on by climate change, the British government’s Environment Agency reported. The study warned of rising sea levels, increased river flows and significant strains on England’s public water supply amid soaring global temperatures associated with the changing climate.

“Some 200 people died in this summer’s flooding in Germany,” the report pointed out. “That will happen in this country sooner or later … unless we also make the places where we live, work and travel resilient to the effects of the more violent weather the climate emergency is bringing.” Some 3 million properties in England are at risk of surface water flooding in places where no early warnings are available.

— At least 85 percent of the global population has experienced weather events made worse by climate change, according to research in the journal Nature Climate Change. Analyzing and mapping more than 100,000 studies of events that could be linked to global warming, researchers paired the analysis with a well-established dataset of temperature and precipitation shifts caused by fossil fuel use and other sources of carbon emissions.

The combined findings — focused on events such as crop failures, floods and heat waves — allowed scientists to link escalating extremes and human activities. They concluded that global warming has affected 80 percent of the world’s land area.

“We have a huge evidence base now that documents how climate change is affecting our societies and our ecosystems,” said lead author Max Callaghan. The study provides hard numbers to support the lived experiences of people from New York City to South Sudan. “Climate change,” Callaghan said, “is visible and noticeable almost everywhere in the world.”

The findings come amid a major push to get countries to commit to more ambitious climate goals ahead of a U.N. summit in Glasgow, Scotland, next month.

Information from the San Francisco Chronicle and the Washington Post was included in the climate update.