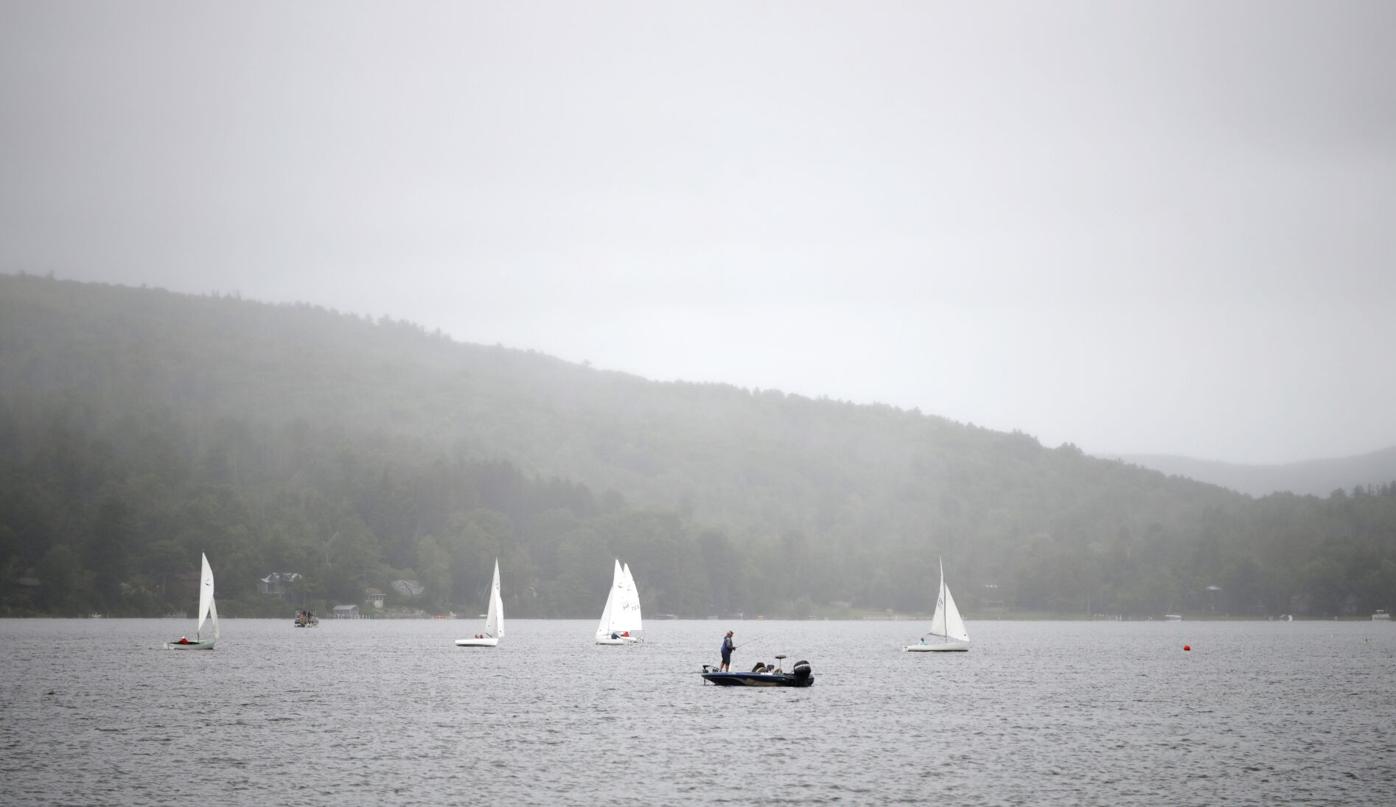 Despite the misty, windy weather, boaters take to the water at the Stockbridge Bowl on Saturday. Temperatures will remain humid through the middle of the week. 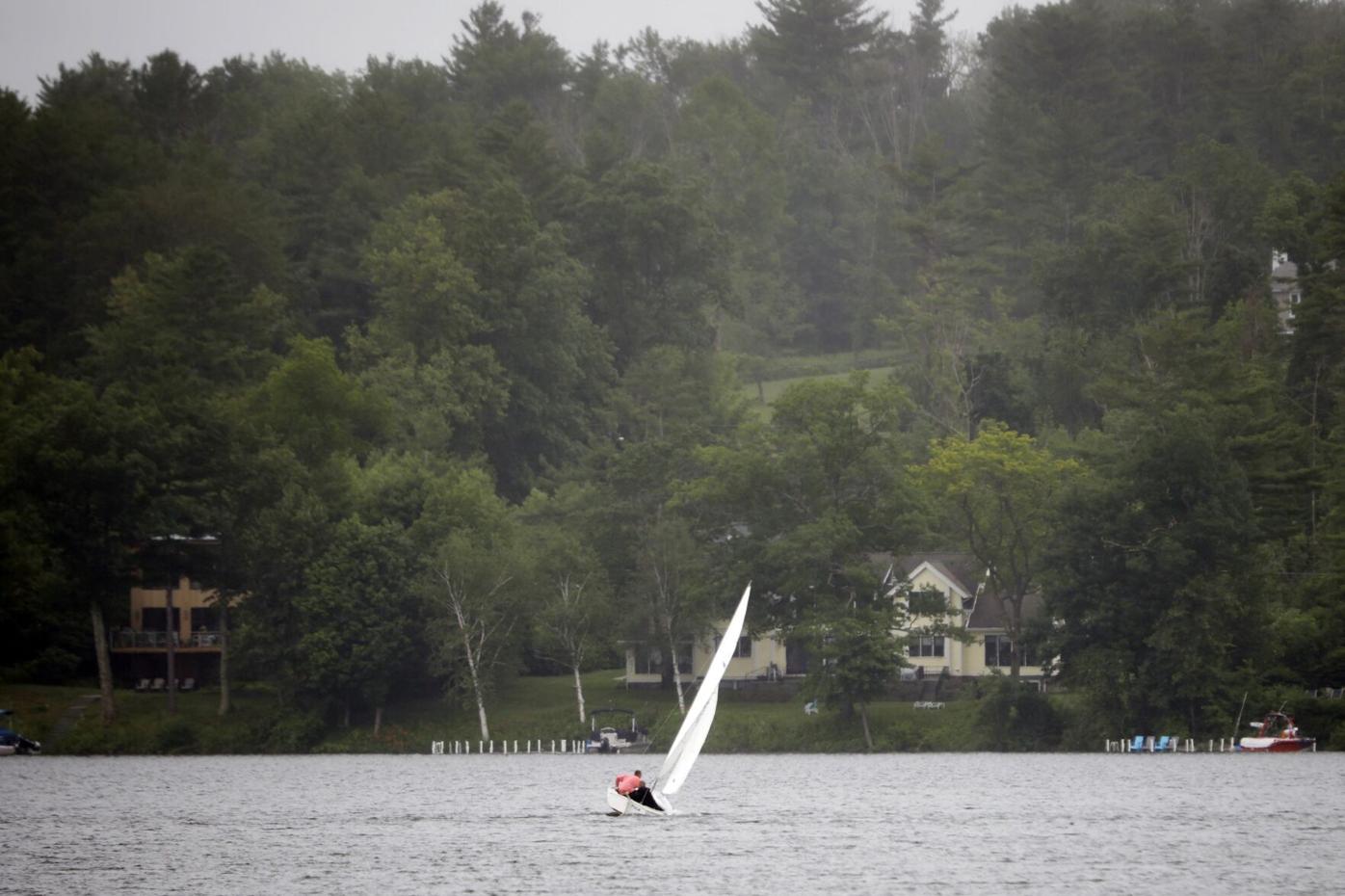 Sailors take advantage of the blustery weather to practice tight turns on the waters of the Stockbridge Bowl on Saturday. 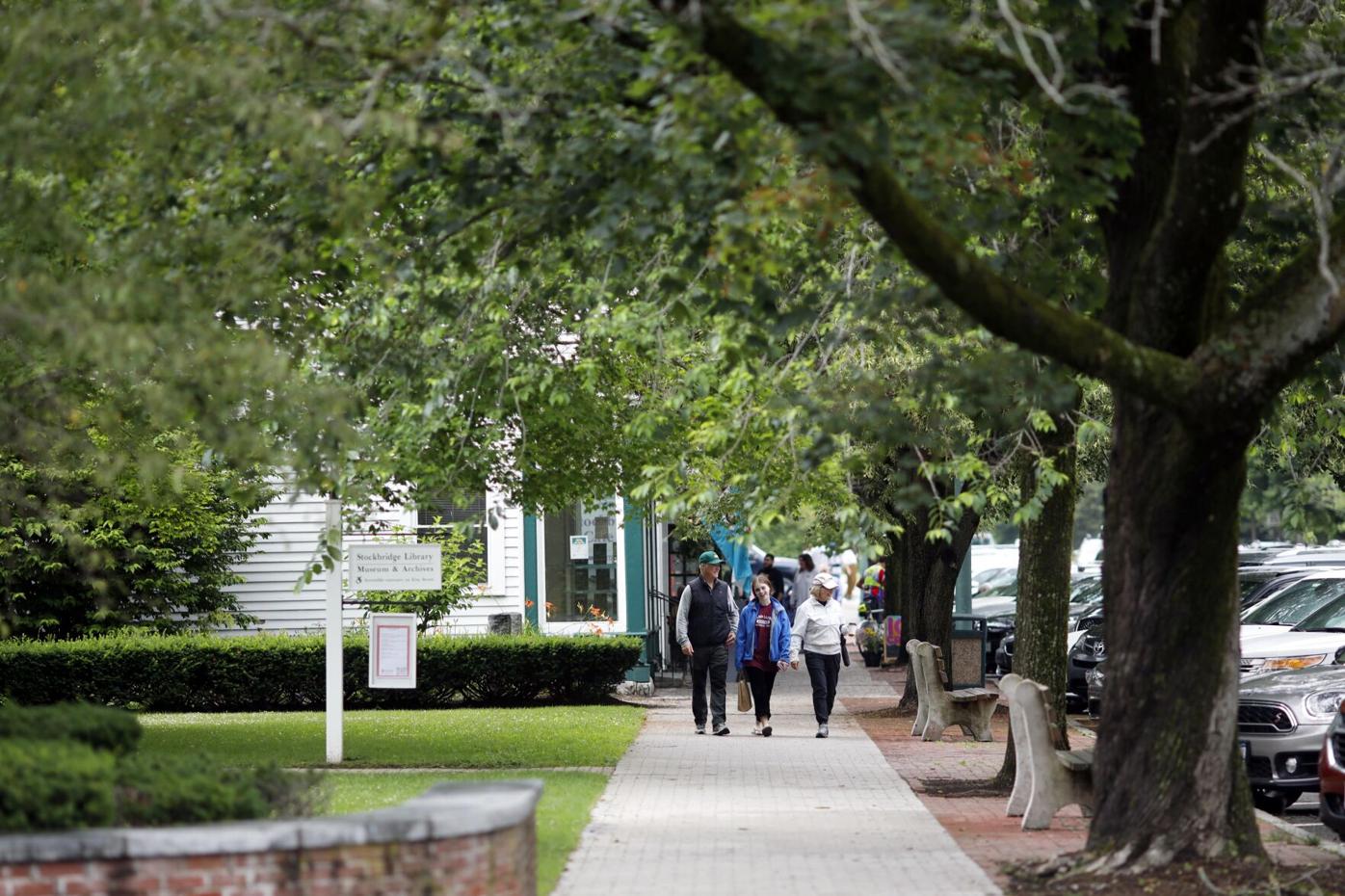 Visitors pass through downtown Stockbridge during the holiday weekend on Saturday. 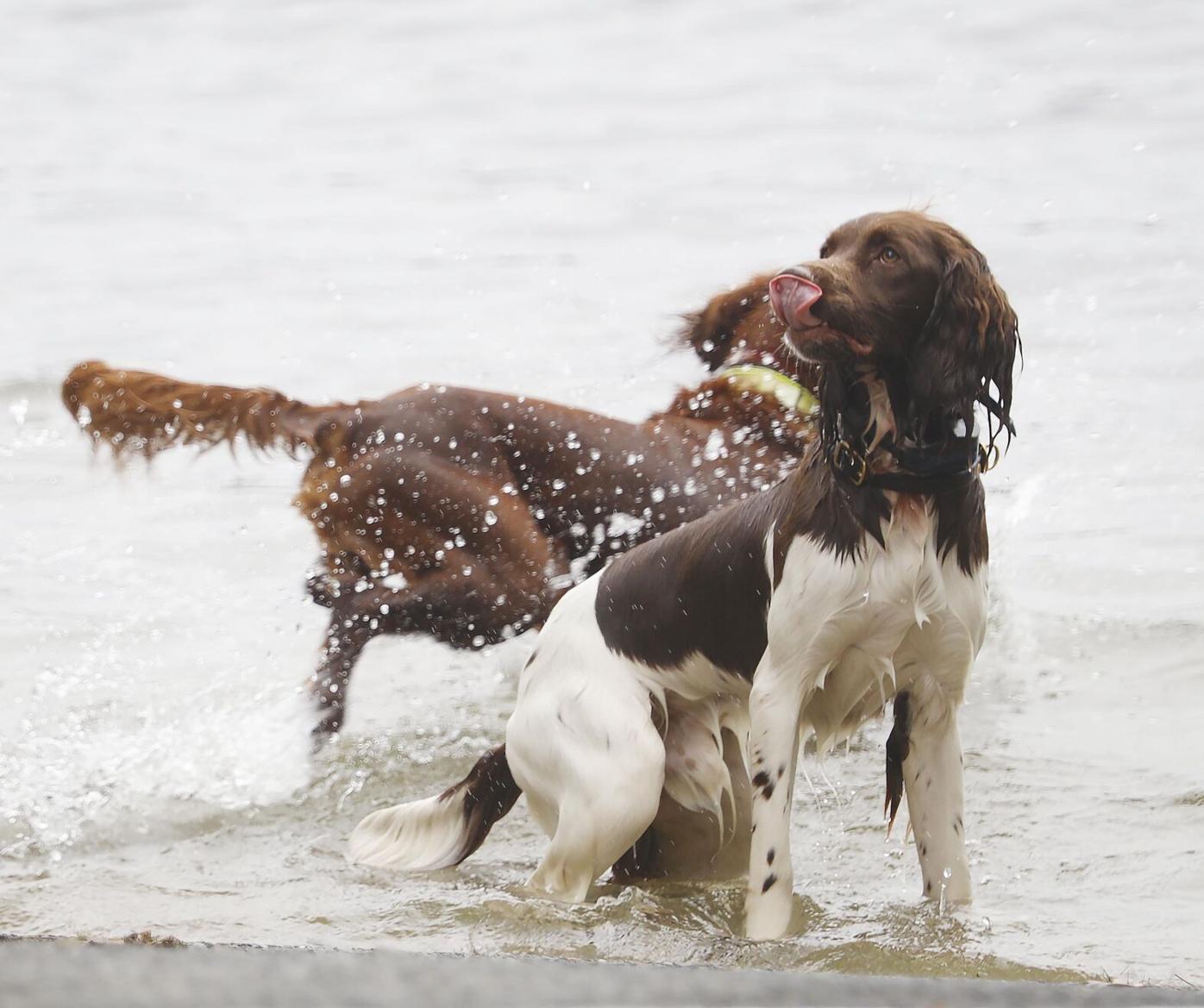 Dogs take a dip in the waters of the Stockbridge Bowl on Saturday.

Despite the misty, windy weather, boaters take to the water at the Stockbridge Bowl on Saturday. Temperatures will remain humid through the middle of the week.

Sailors take advantage of the blustery weather to practice tight turns on the waters of the Stockbridge Bowl on Saturday.

Visitors pass through downtown Stockbridge during the holiday weekend on Saturday.

Dogs take a dip in the waters of the Stockbridge Bowl on Saturday.

We’re back on the weather rollercoaster following a remarkably dismal start to the holiday weekend with half the amount of rain Berkshire County typically sees for the entire month of July in just three days, and the lowest maximum daytime temperature (63) for July 3 since 1992.

Fortunately, the sun broke through occasionally after a misty, drizzly morning on Sunday, and folks enjoying Monday off can salvage a reasonable day as the unseasonable chill gives way to pleasant temperatures, with highs back to normal, 75 to 80.

Moderate midsummer heat and humidity return on Tuesday and Wednesday, with highs of at least 85 and a likelihood of thunderstorms. Then, two days of unpredictable skies because of a weak storm approaching from the Great Lakes that’s drawing on tropical moisture. Next weekend should be warm, humid and at least partly sunny, with afternoon showers still possible.

Elsa remains a wild card, as it’s expected to move across central and western Cuba and then pass near the Florida Keys late Monday. With winds of 60 mph, the tropical storm is then forecast to move near or over portions of the west coast of Florida on Tuesday and Wednesday, according to the National Hurricane Center.

By Thursday, Georgia and the Carolinas should feel the storm’s impact before it moves offshore, well east of Maryland, Delaware and New Jersey on Friday.

Based on the predicted storm track, the Berkshires will be spared any noticeable effects, as next weekend shapes up as fairly typical for July.

Looking ahead to mid-month, the outlook from the Climate Prediction Center indicates temperatures remaining normal or slightly above, and rainfall continuing above average, although no washouts or soaking downpours are in sight.

Excessive heat is expected to continue from the northwestern to the north-central U.S., with temperatures climbing once again into the 90s to near 100 on Monday. The heat wave over much of the West will continue at least through next weekend.

According to a posting on Yale Climate Connections, a media service run by Yale University’s School of the Environment, “it’s not hype or exaggeration to call the past week’s heat wave the most extreme in world weather records.”

The report tallied close to 600 heat-related deaths in Oregon, Washington and in British Columbia, the southwest Canadian province where at least 48 people died in what may have been the deadliest weather event on record for the region. “The unprecedented death toll, mostly from people living alone in unventilated homes, results from a heat onslaught more intense by some measures than anything in global records, yet very much in line with the expected impacts of a human-warmed climate,” the Yale article pointed out.

The eventual death toll is likely to be much higher than current estimates, said Kristie Ebi, a professor of global health at the University of Washington. She emphasized that the catastrophic heat wave is not the “new normal,” a term she calls “really misleading” as it actually underestimates the gravity of the situation. “We’re in a period when there’s going to be ongoing change for decades,” she told the Yale Climate Connections researchers. “The new normal is not the current temperature. The new normal is the constant change.”

Never in the century-plus history of world weather observation have so many all-time heat records fallen by such a large margin than in the past week’s historic heat wave in western North America, the study emphasized. The only reference point is the great Dust Bowl heat wave of July 1936 in the U.S. Midwest and south-central Canada.

“This is the most anomalous regional extreme heat event to occur anywhere on Earth since temperature records began. Nothing can compare,” said weather historian Christopher Burt, author of the book “Extreme Weather.”

International weather records researcher Maximiliano Herrera stated that “what we are seeing now is an endless waterfall of records being smashed.”

According to Herrera, more all-time heat records have been broken by at least 9 degrees in the past week than in world weather record-keeping going back to July 1936. “It’s worth noting that the record North American heat of the 1930s was largely connected to the Dust Bowl, in which the effects of a multiyear drought were amplified by over-plowed, denuded soil across the Great Plains – an example of human-induced climate change itself, albeit temporary,” he wrote.

In recent weeks across the western U.S., the overall extent of drought is at its highest level since the U.S. Drought Monitor was established in 2000. Severe to exceptional drought covers 81 percent of the West, the first time on record that index has gone above 80 percent.

Unfortunately, the latest 10-day forecasts predict that the hard-hit region could see more all-time heat records starting next weekend. Even an average-strength heat wave could boost the odds of significant wildfire activity.

An advance look at next weekend’s outlook for popular vacation destinations in the Northeast.

Green Mountains: Some clouds, some showers, highs low- to mid-70s, lows near 60.

Thursday: Mostly cloudy, high in the mid-70s, showers likely in the afternoon and at night, low around 60.

Saturday: Partly sunny, near 80, chance of showers. Some clouds at night, low around 65.