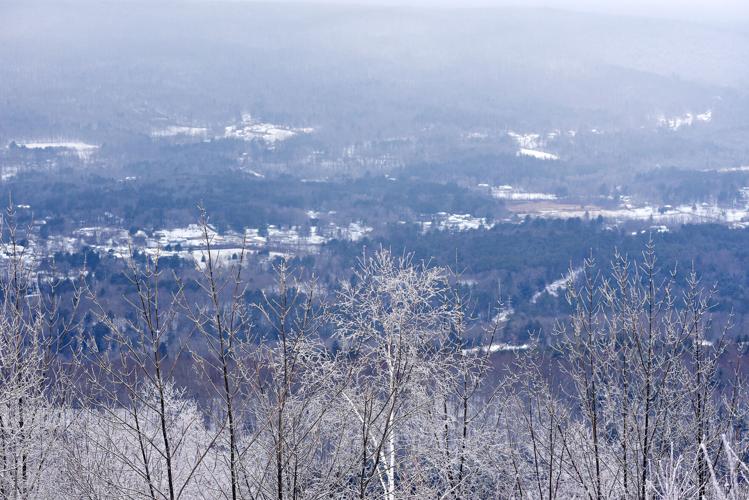 Looking west from near the hairpin turn along the Mohawk Trail in North Adams on Sunday. Those of us dreaming of a white Christmas are probably out of luck. As of Sunday’s extended forecast, there was just a 40 percent chance of snow showers on Christmas Eve, according to the National Weather Service in Albany, N.Y. 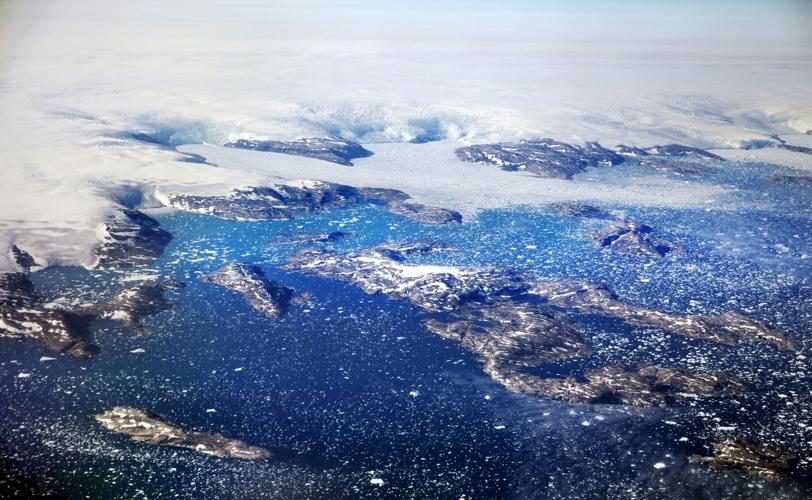 Icebergs float in a fjord off Greenland in 2017. According to the National Oceanic and Atmospheric Administration’s Arctic Report Card for 2021, after decades of relative stability, the Greenland ice sheet now has lost mass almost every year since 1998, with record ice loss in 2012 and 2019. In August, rainfall was observed at the Greenland ice sheet’s 10,500-foot summit for the first time ever. 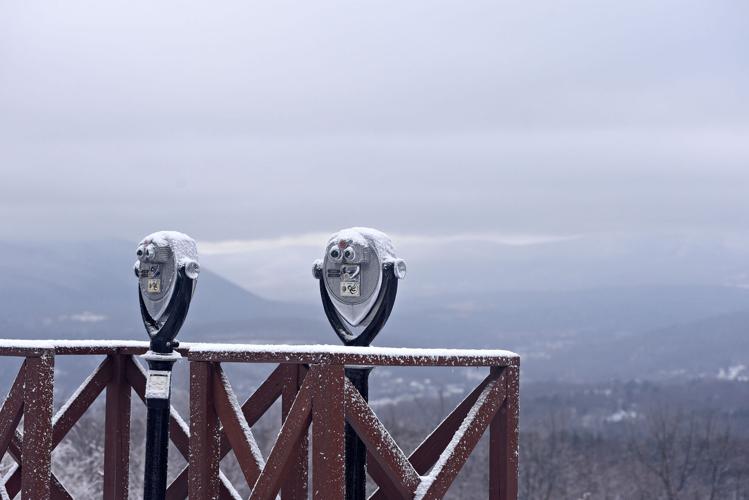 Looking west from near the hairpin turn along the Mohawk Trail in North Adams on Sunday. 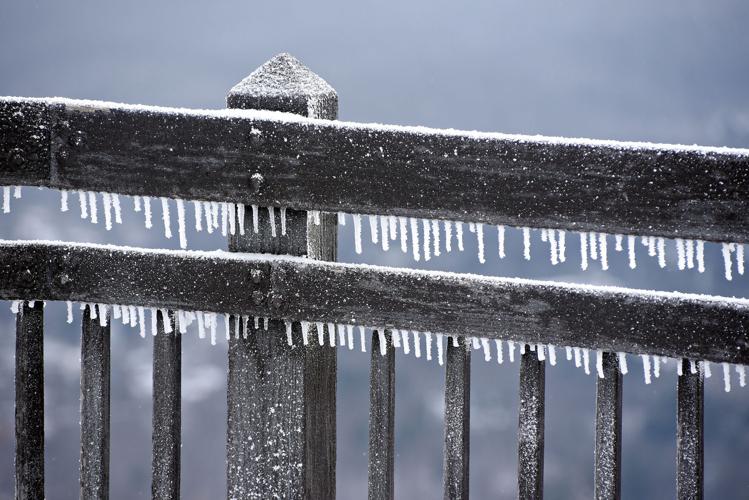 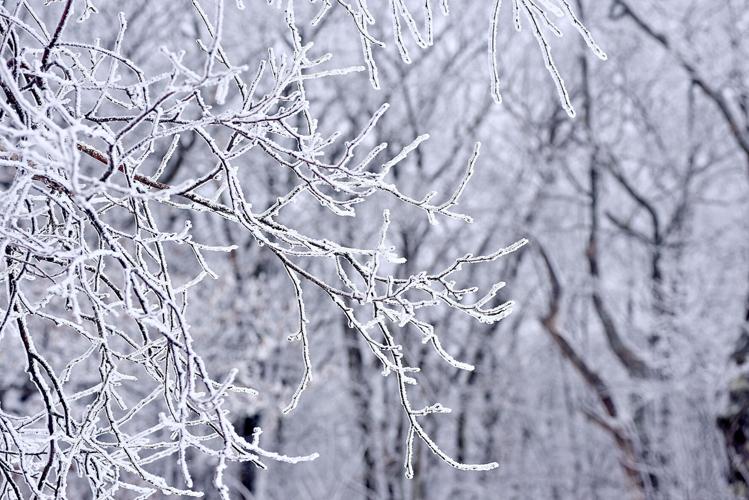 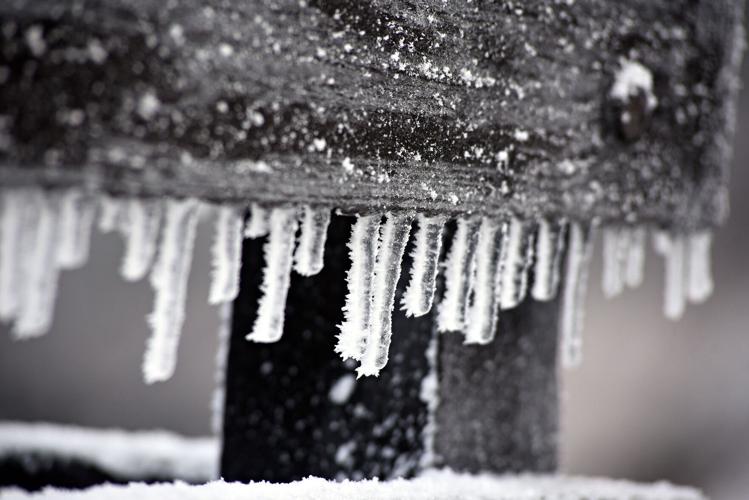 Looking west from near the hairpin turn along the Mohawk Trail in North Adams on Sunday. Those of us dreaming of a white Christmas are probably out of luck. As of Sunday’s extended forecast, there was just a 40 percent chance of snow showers on Christmas Eve, according to the National Weather Service in Albany, N.Y.

Looking west from near the hairpin turn along the Mohawk Trail in North Adams on Sunday.

When professional meteorologists turn out to be wrong, they speak of a “busted forecast.”

So it was this past weekend, when nearly all of the county north of the MassPike saw only freezing rain. The predicted 2 to 4 inches of snow did fall, but in southwestern Vermont, where Bennington observers measured a moderate accumulation, enough to assure a picture-postcard landscape north of the Massachusetts state line.

The winter weather advisories (and, for southern Vermont, winter storm warnings) were canceled well before their expiration time.

Will computer models be more reliable this week?

Monday: Mostly sunny; near 32; some clouds at night; low around 20.

Christmas Day: Chance of rain and snow showers, then partly sunny; around 40.

Those of us dreaming of a white Christmas, “Just like the ones I used to know/Where the treetops glisten …” are probably out of luck. As of Sunday’s extended forecast, there was just a 40 percent chance of snow showers on Christmas Eve, according to the National Weather Service in Albany, N.Y.

That’s appropriate, since the solstice arrives at 10:59 a.m. Tuesday. It’s the year’s shortest amount of sunshine in a day here (9 hours, 3 minutes, 58 seconds), but we’ve already gained three minutes of afternoon daylight this past week, to 4:23 p.m, in case you didn’t notice! Mornings will remain dark, with sunrise reaching 7:22 a.m., its latest, on Dec. 29, continuing until Jan. 8.

Monday should be partly sunny, with daytime highs remaining below normal. Clouds will gather, and winds will turn gusty Tuesday, as temperatures recover toward average, but it should be dry until Christmas Eve, when a storm system might approach from the Midwest.

With considerable candor, the government forecasters acknowledge that “computer model guidance diverges considerably, there is very low confidence this far out.”

With only 2 inches of snow at the National Weather Service’s automated observation station at the Pittsfield Municipal Airport so far this month, this could end up as the least-snowy December on record.

The Climate Prediction Center’s outlook through the rest of the month shows temperatures trending below normal, especially during the week after Christmas, with snow and rainfall remaining near normal. By New Year’s Eve, the historical average for temperatures at the Pittsfield airport ranges from a daytime high of 32 to an overnight low of 17.

A storm system is forming over the western Gulf of Mexico, heading eastward toward Florida by Tuesday morning, with showers and thunderstorms developing.

Much of the western U.S. will see persistent rain and mountain snow, probably moderate to heavy later in the week. Northern and Central California are the likeliest targets for the heaviest precipitation. Some moisture should reach Southern California and Arizona right before Christmas Day.

A low-pressure system off the North Carolina coast might bring some rain to the region Wednesday.

Far-above-normal temperatures will continue in the southern Plains, with a few record highs possible in Texas. The unseasonable warmth will spread eastward, into the Mississippi Valley, while the far northern Plains (Montana and North Dakota) face an intrusion of arctic air by next weekend.

The National Oceanic and Atmospheric Administration’s Arctic Report Card for 2021 cites growing evidence that climate change continues to fundamentally alter the once-reliably frozen region, as increasing heat and the loss of ice drive its transformation into a warmer, less-frozen and more uncertain future.

“This year’s report continues to show how the impacts of human-caused climate change are propelling the Arctic region into a dramatically different state than it was in just a few decades ago,” said NOAA Administrator Rick Spinrad. “The trends are alarming and undeniable. We have a narrow window of time to avoid very costly, deadly and irreversible climate impacts.”

Some of the significant findings:

● The October-December 2020 period was the warmest Arctic autumn on record, dating to 1900. The average surface air temperature (October 2020-September 2021) was the seventh-warmest on record. The region continues to warm more than twice as fast as the rest of the world.

● The snow-free period across the Eurasian Arctic during summer 2020 was the longest since at least 1990. The June 2021 snow cover in Arctic North America was below the long-term average for the 15th consecutive year. June snow cover in Arctic Europe has been below average 14 of the past 15 years.

● The total extent of sea ice in September 2021 was the 12th lowest on record. All 15 of the lowest minimum extents have occurred in the past 15 years. The substantial decline in Arctic ice since 1979 is one of the most iconic indicators of climate change. Large mammals, like polar bears, go hungry without this crucial platform for hunting. Marine life, ranging from tiny plankton to giant whales, is at risk.

● The loss of sea ice has enabled shipping and other commercial and industrial activities to push farther north, in all seasons, resulting in more garbage and debris collecting along the shore. In many Alaska Native communities, climate impacts compounded the hardships of the coronavirus pandemic, leading to food shortages among people who have lived off this land for thousands of years.

“We all have a role to play in creating the best possible outcomes for the region, its residents and all the citizens of the globe who depend on the Arctic as a critical component of our Earth system,” said Twila Moon, a co-editor of the report. “The very character of these places is changing. We are seeing conditions unlike those ever seen before.”

“The Arctic is a way to look into the future,” said Matthew Druckenmiller, a co-editor. “Small changes in temperature can have huge effects in a region that is dominated by ice.”

The rapid transformation creates ripple effects all over the planet. Sea levels will rise, weather patterns will shift and ecosystems will be altered. Unless humanity acts swiftly to curb emissions, scientists say, the same forces that have destabilized the poles will wreak havoc on the rest of the world.

"Snow was falling, so much like stars filling the dark trees that one could easily imagine its reason for being was nothing more than prettiness."

Though no place on Earth is changing as fast as the Arctic, rising temperatures already have brought similar chaos to more temperate climes as well, The Washington Post reported. Unpredictable weather, unstable landscapes and collapsing ecosystems are becoming facts of life in communities around the world.

None of this represents a “new normal,” Moon cautioned. It’s merely a pit stop on a path to an even stranger and more dangerous future.

“It’s not just about polar bears, it’s about actual humans,” said Rick Thoman, a climate specialist at the University of Alaska-Fairbanks. “These changes are impacting people and their lives and livelihoods, from ‘What’s for dinner tonight?’ up to the international scale.”

To read the full Arctic Report Card and view a short video: arctic.noaa.gov/Report-card.

Information from The Washington Post was included in the Climate Overview.