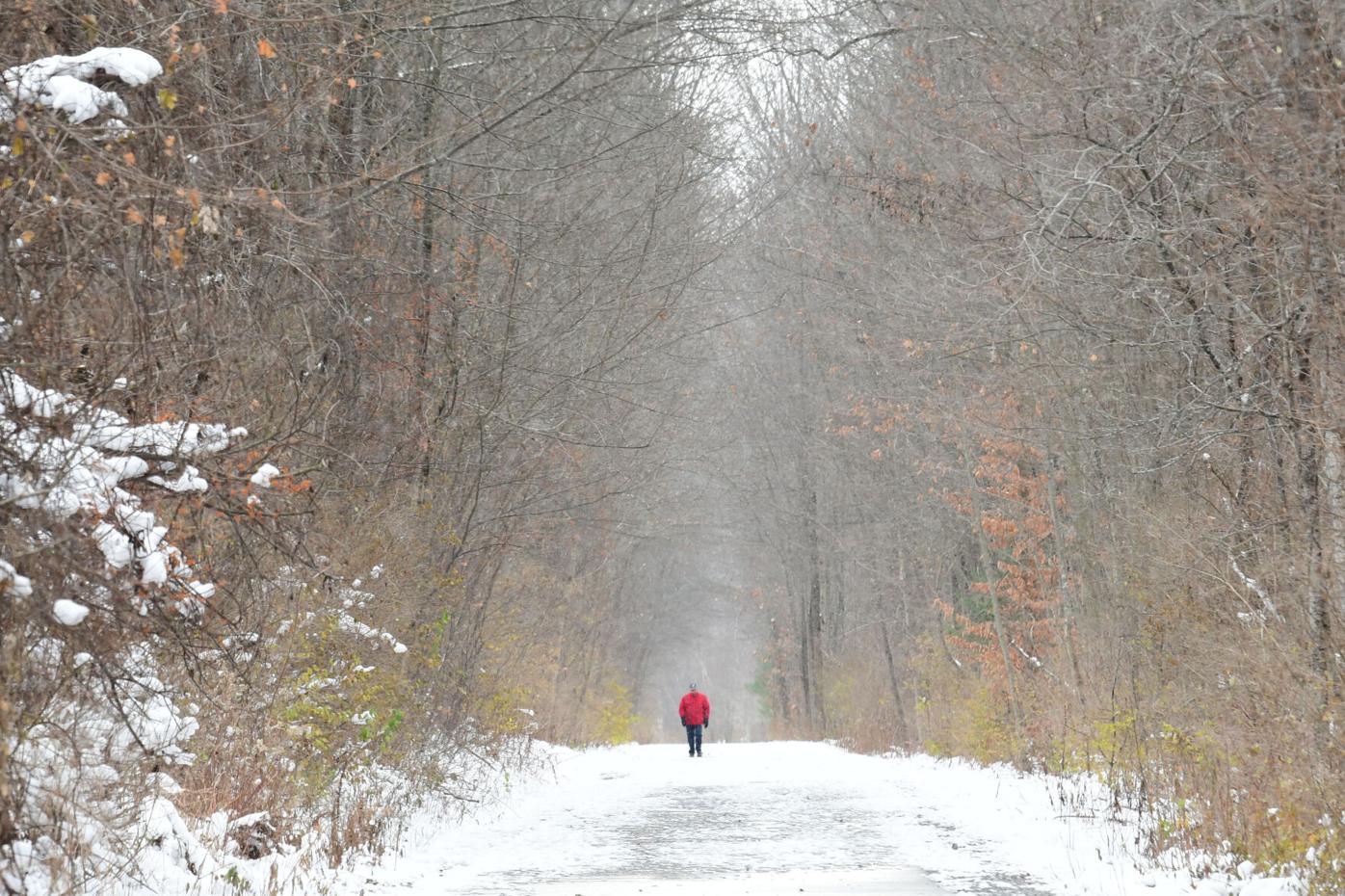 A person walks along the Ashuwillticook Trail in Cheshire one day recently. The week ahead could bring a host of weather conditions, including more snow. 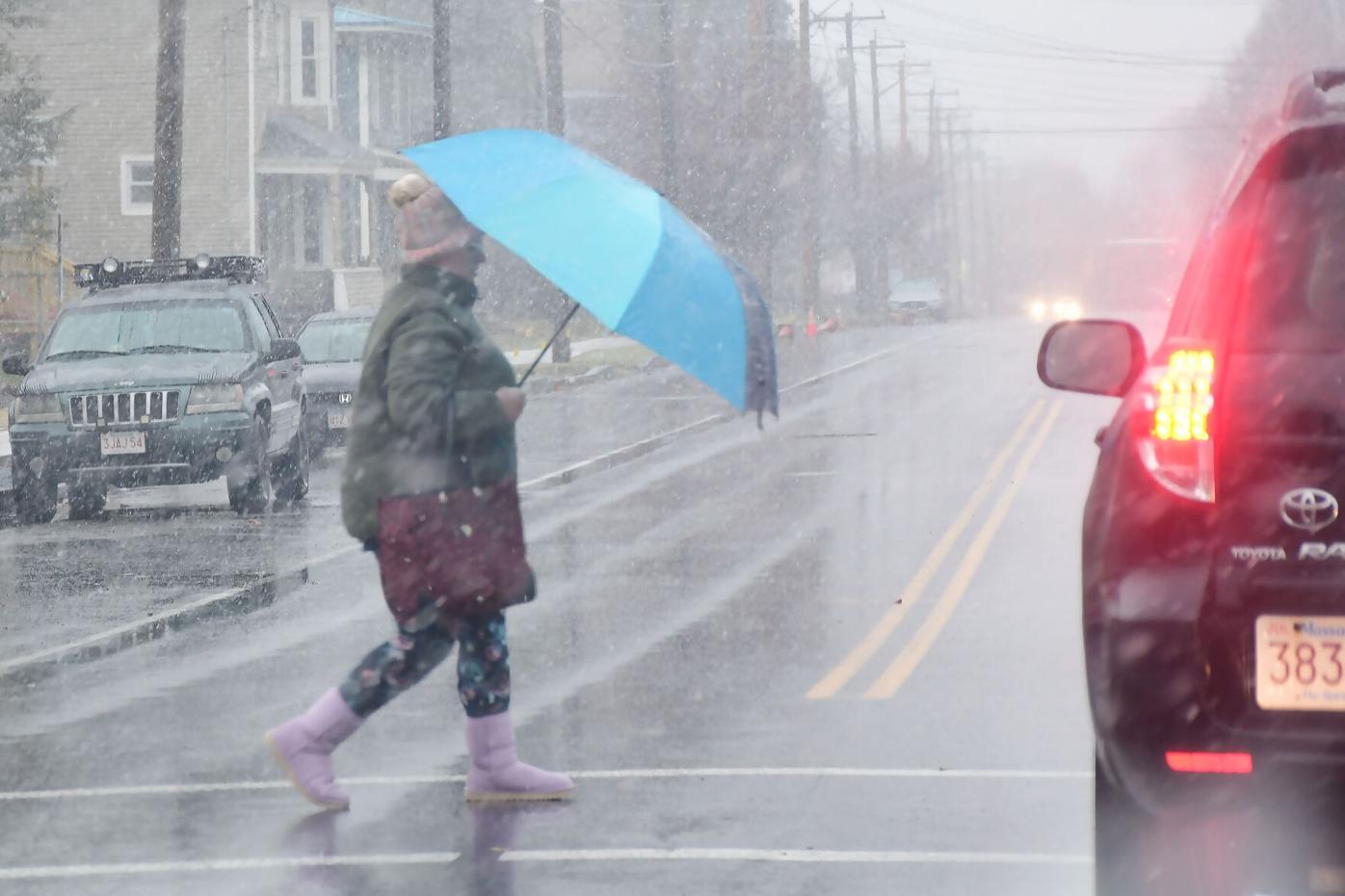 A woman crosses Commercial Street in Adams during a recent snowstorm. 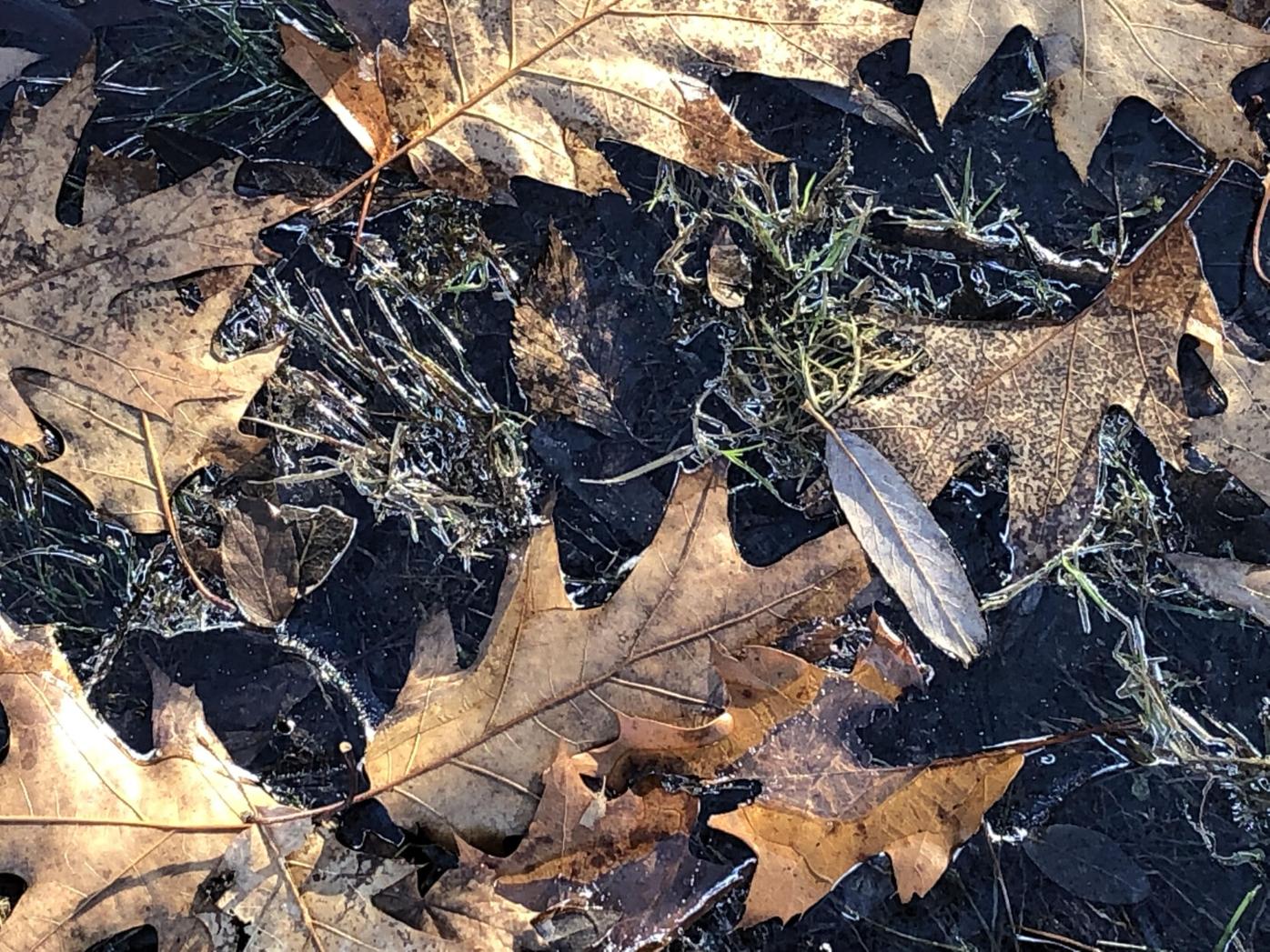 Autumn leaves and grass are encased in some ice creating an interesting abstract. The week’s big question is a coastal storm developing off the Delaware and Maryland coast on Wednesday. The most likely scenario is a light snowfall Wednesday. The specific forecast for Berkshire County calls for a 60 percent of snow showers.

A person walks along the Ashuwillticook Trail in Cheshire one day recently. The week ahead could bring a host of weather conditions, including more snow.

A woman crosses Commercial Street in Adams during a recent snowstorm.

Autumn leaves and grass are encased in some ice creating an interesting abstract. The week’s big question is a coastal storm developing off the Delaware and Maryland coast on Wednesday. The most likely scenario is a light snowfall Wednesday. The specific forecast for Berkshire County calls for a 60 percent of snow showers.

“The sun that brief December day/

Rose cheerless over hills of gray,/

And, darkly circled, gave at noon/

Volatile — that’s the apt description of the weather pattern this week.

Many area residents were startled by an unusual thunderstorm Thursday evening, followed by gusty, gale-force winds well into Friday. Electrical storms are extremely rare in late autumn. What we experienced was caused by a clash between mild air just to our south and the approach of a sharp cold front — the leading edge of high-pressure air masses from north-central Canada, where deep winter has set in.

There may be a repeat performance on Monday caused by a powerhouse storm system. Highs are expected to soar into the mid-50s, nearly 20 degrees above average.

The turbulence results from merging storm systems from the Tennessee Valley and the Great Lakes regions. Winds may gust to 40 or 50 mph.

A potent cold front is expected to track across the Berkshires by sunset Monday, with moderate to heavy rain, a sharp temperature drop and possibly some rumbles of thunder. The region will dry out on Tuesday, but daytime highs will barely reach 32.

Wednesday: Snow showers likely in the afternoon and evening, high around 32; mostly cloudy late at night, low around 20.

Thursday: Partly sunny, near 32, clouds at night, low in the upper teens.

Friday: Mostly cloudy, possible rain and snow showers after dark, high in the upper-30s, low in the high-20s.

The week’s big question is a coastal storm developing off the Delaware and Maryland coast on Wednesday. The most likely scenario is a light snowfall Wednesday. The specific forecast for Berkshire County calls for a 60 percent of snow showers.

After a tranquil Thursday, expect another pendulum swing next weekend from a warmup followed by another cold snap early next week.

The government’s Climate Prediction Center’s long-range outlook for mid-month (Dec. 12-18) indicates above normal temperatures for our region, with rain or snowfall below normal.

Heavy snow and gusty winds up to 70 mph will impact parts of the Northern Plains, Upper Midwest, and Great Lakes through Monday. By Tuesday morning, lake-effect snow showers will accompany bitterly cold air rushing over the still ice-free Great Lakes.

A fast-moving cold front is forecast to clash with the far-above average temperatures throughout the southern states, producing showers and thunderstorms from the lower Ohio Valley to eastern Texas. Isolated severe weather is possible, including damaging wind gusts, large hail, and a slight chance of tornadoes. Periods of heavy rain could lead to flash flooding from far southwest Ohio to northeast Arkansas.

Active weather will also be found across the Northwest as a storm system enters from the Pacific and interacts with a relatively cold airmass in place on Monday.

Widespread rain is predicted for the Southeast on Wednesday. Late-arriving heavy mountain snows are in store for the Rockies and the Sierra Nevada mountains. Rain will spread from the Pacific Northwest southward to California on Thursday and Friday. Parts of Southern California may see the first rainfall in over a month.

Midweek temperatures Wednesday will be as much as 15 degrees above average for the High Plains. By Friday, highs may reach 80 in parts of Texas.

After some rain on Monday, the rest of the week in southern Florida should be partly cloudy with highs near 80.

The blizzard warnings issued for Hawaii’s Big Island summits this past weekend were not unheard-of. Though the state has been under winter storm warnings from the National Weather Service an average of three times each year, blizzard warnings have occurred just five times in the last decade.

In a likely sign that our climate is changing, snowfall has been scarce across the U.S. so far this season. Most of the nation has enjoyed unusually mild temperatures, especially from the Midwest and Plains to the Pacific coast.

This weekend, just 6 percent of the lower 48 states had any snow cover. That’s the lowest for late autumn in nearly two decades. Denver, for instance, is still awaiting its first snow. Until this year, its latest first snowfall was Nov. 21, in 1934.

Although the Berkshires had a brief taste of winter weather thanks to a 5- to 8-inch snowfall on Nov. 26, the ground is mostly bare now. Climate studies show that the Northeast is the nation’s fastest warming region, signifying less-frequent snow.

Total snowfall has decreased in many parts of the country since records began in 1930, with 57 percent of weather stations showing a decrease, the Boston Globe reported.

December is the first month of “meteorological winter,” but the jet stream has trapped cold air in Alaska, where November was one of the coldest months on record. Last Thursday, 65 weather stations across the lower 48 set record high temperature marks for Dec. 2. On Friday, parts of South Carolina and Georgia hit record highs.

What’s the impact of the stuck-in-place jet stream, the all-important river of air that moves weather from west to east on a rollercoaster-like path? The result is low pressure bringing rain to the Pacific Northwest, while high pressure hovering over about two-thirds of the nation produces dry and warmer weather, according to Brian Hurley at the Weather Prediction Center.

In Boulder, Colorado, meteorologist Bob Henson enjoyed a rare December bike ride on Thursday, the Associated Press reported. Still, “there’s a lot of angst about the lack of snow,” he said. “It puts you in a psychic quandary. You enjoy the warm weather while keeping in mind it’s not good for Earth to be warming.”

Previous research had suggested a possible increase in Atlantic hurricane intensity in recent decades, tied to human-caused climate change, the Washington Post pointed out. The MIT study published in Nature Communications not only supports that, showing storms are becoming more destructive, but also finds that both hurricanes and major hurricanes are increasing in frequency.

MIT atmospheric scientist Kerry Emanuel stated that “the evidence does point, as the original historical record did, to long-term increases in North Atlantic hurricane activity.”