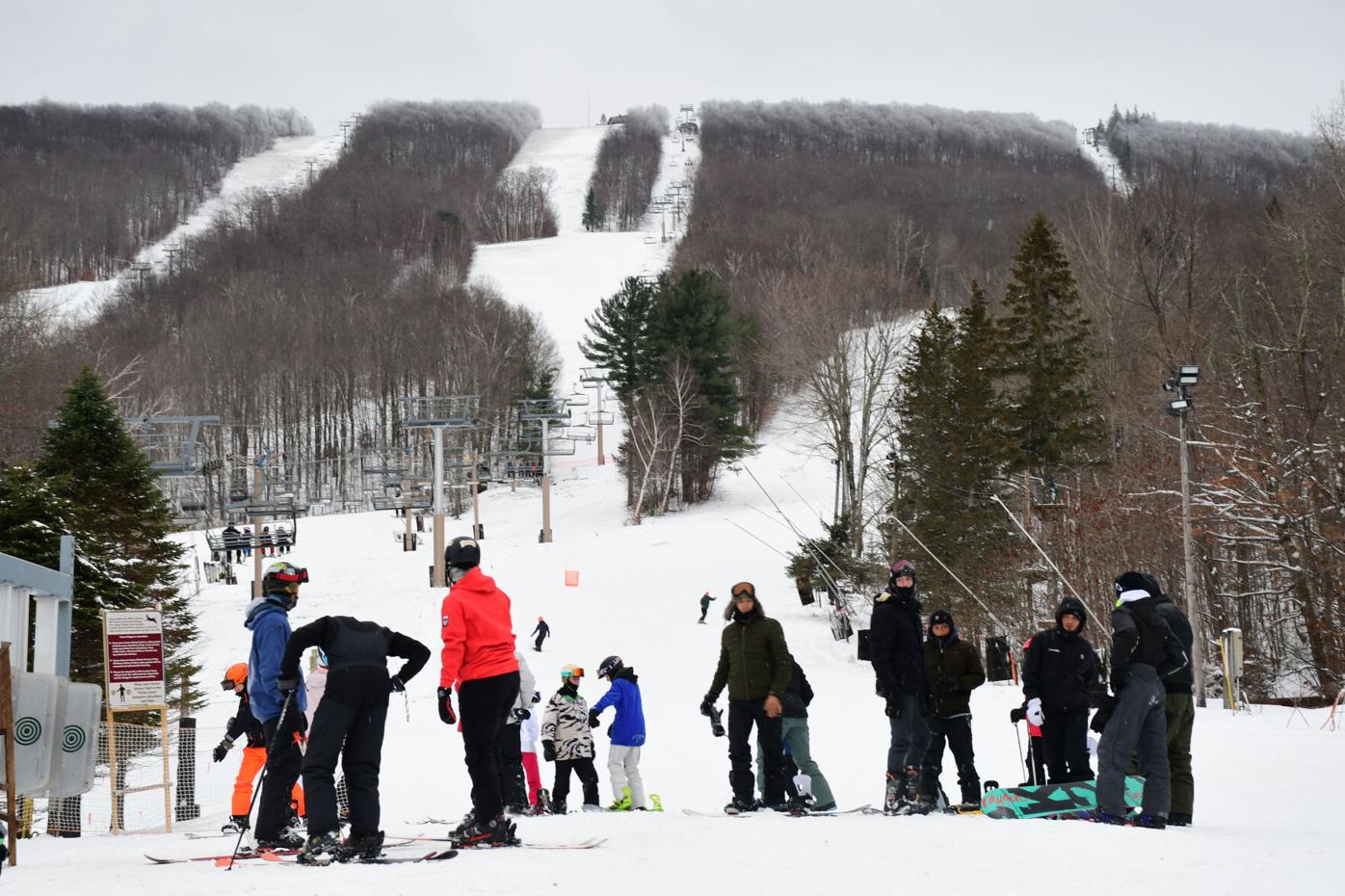 Skiers hit the slopes at Jiminy Peak Mountain Resort in Hancock on Sunday after snowfall on Friday, which in addition to the snowmaking, made for favorable skiing conditions on the Thanksgiving holiday weekend. 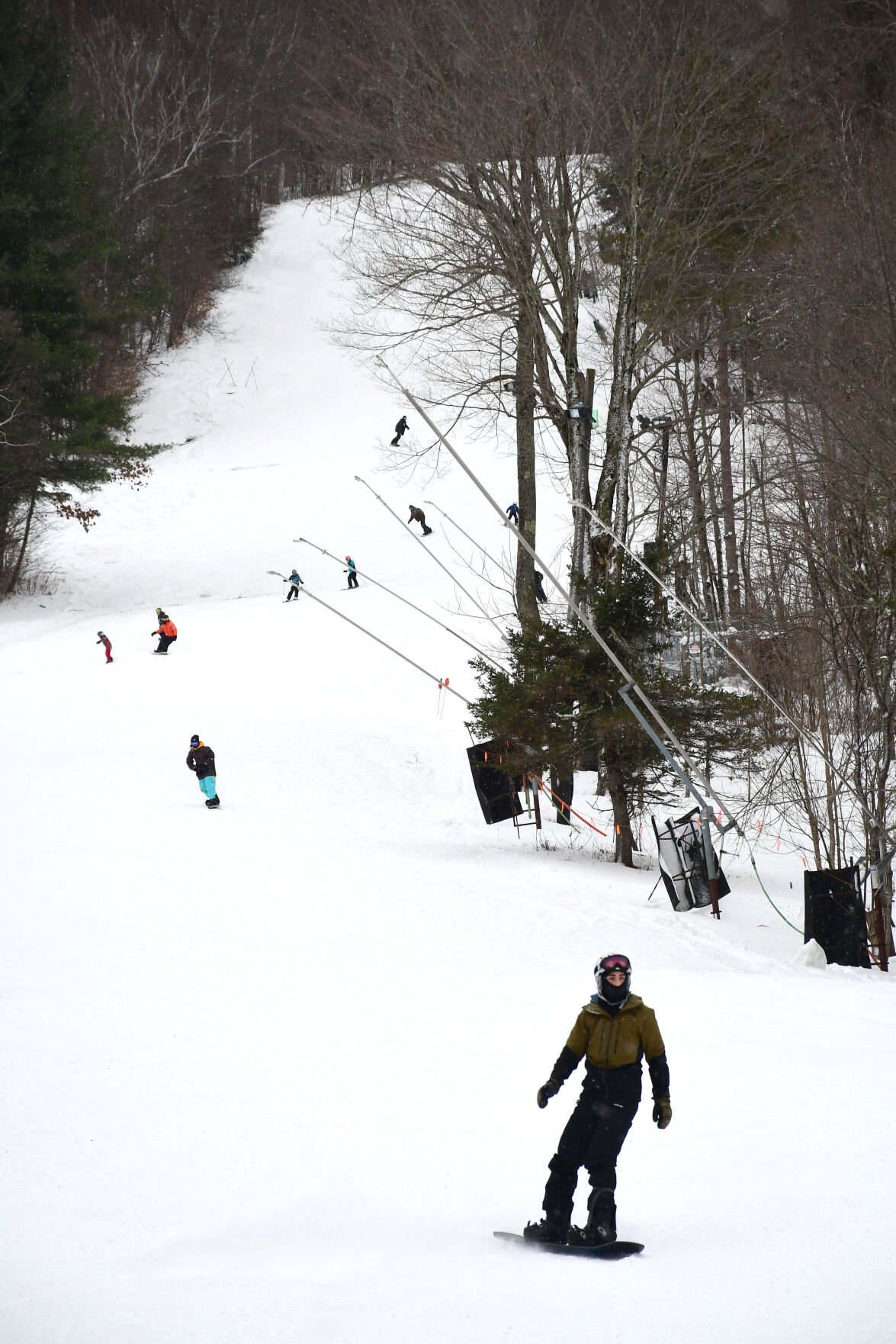 Skiers hit the slopes at Jiminy Peak Mountain Resort in Hancock on Sunday. 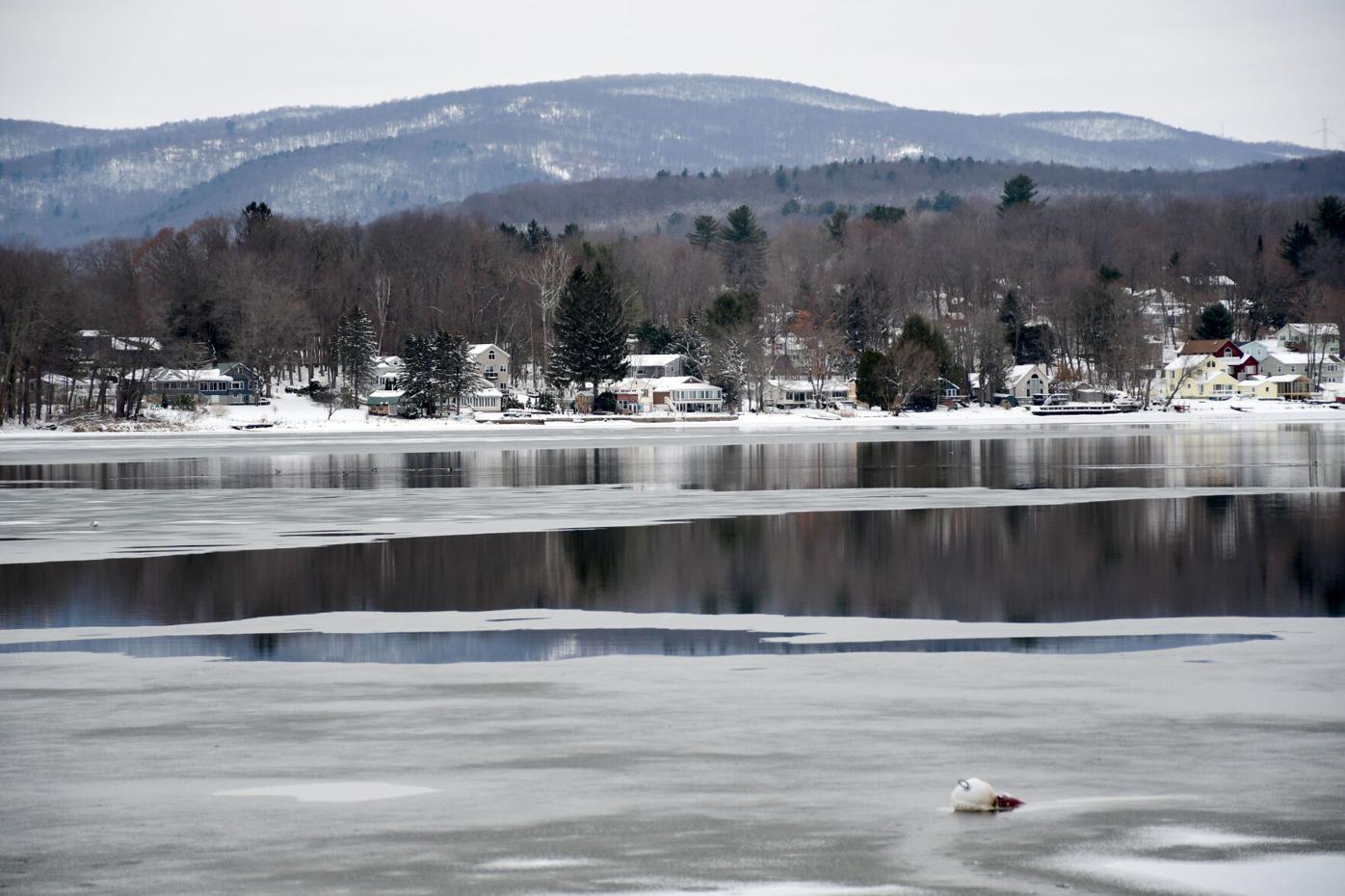 With cooler temperatures and a snowfall, the water on Pontoosuc Lake in Pittsfield has begun to freeze over, but is by no means safe for traversing upon just yet. 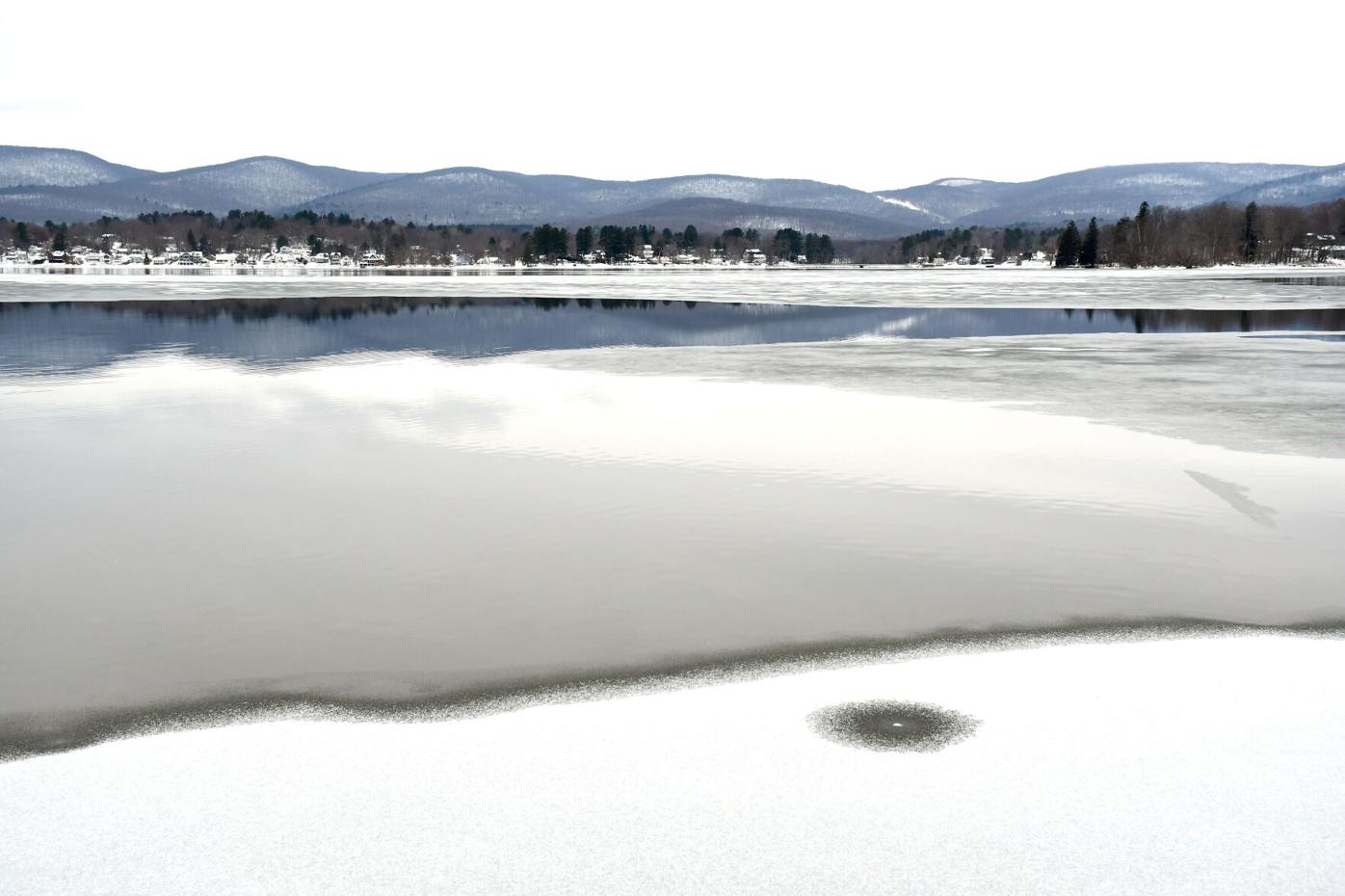 With cooler temperatures and a snowfall, the water on Pontoosuc Lake in Pittsfield has begun to freeze over.

Skiers hit the slopes at Jiminy Peak Mountain Resort in Hancock on Sunday after snowfall on Friday, which in addition to the snowmaking, made for favorable skiing conditions on the Thanksgiving holiday weekend.

Skiers hit the slopes at Jiminy Peak Mountain Resort in Hancock on Sunday.

With cooler temperatures and a snowfall, the water on Pontoosuc Lake in Pittsfield has begun to freeze over, but is by no means safe for traversing upon just yet.

With cooler temperatures and a snowfall, the water on Pontoosuc Lake in Pittsfield has begun to freeze over.

“The river this November afternoon

Rests in an equipoise of sun and cloud:

Its passage. All seems tranquil, all in tune.”

The transition to wintry weather around Thanksgiving often seems abrupt, and so it was that some folks were surprised by the blanket of white that greeted them Saturday morning. Snow accumulation, above the predicted range, topped out between 8 and 9 inches in Pittsfield and Dalton, with 4 to 5 inch totals common in North and South Berkshire.

After light snowfall on Sunday into early Monday, the rest of the week looks like typical late November and early December, although colder than normal at the start. Occasional snow showers are possible Tuesday and Thursday, but there are no major storms indicated in the extended forecast.

By Wednesday, temperatures may moderate toward seasonal daytime highs near 40, with overnight lows in the 20s. Heading into next weekend, cold and blustery conditions are likely, with occasional snow or rain showers, depending on timing. But at least some sunshine will prevail from Friday to Sunday, an ideal weekend for winter sports enthusiasts.

Nearly 20 ski areas in the Northeast are open, including Jiminy Peak in Hancock, according to onthesnow.com. Other nearby ski areas expected to open by mid-December include Berkshire East Mountain Resort in Charlemont, Bousquet in Pittsfield, Catamount in Egremont and Otis Ridge and Ski Butternut in Great Barrington. Daily ski conditions appear in print on the back page of The Eagle’s A section.

For cross-country skiers, Notchview on the Dalton-Windsor line is open with limited groomed trails, while Prospect Mountain in Woodford, Vermont, has a live Trail Cam showing a good base off the Route 9 snow belt, where 8 inches fell over the weekend.

The extended outlook for Dec. 5-11 from the Climate Prediction Center indicates near-normal temperatures and precipitation for western New England.

Call it a plume of moisture, an atmospheric river or the Pineapple Express, the parade of Pacific rainstorms originating east of Hawaii continues to drench the Northwest. Flash flooding continues in some areas.

"An atmospheric river led to major flooding and washed out roads last week in Washington state and British Columbia," according to AccuWeather meteorologist Ryan Adamson. Northwestern Washington is the hardest-hit area in the U.S., with more than 10 inches of rainfall so far this month, compared to a November average of 6 inches.

Temperatures are running up to 30 degrees above average over parts of the Northern Rockies and the Northern and Central High Plains as the week begins. The Great Lakes region — including much of Michigan, northeastern Ohio, northwestern Pennsylvania and western New York — is being clobbered by heavy snowfall through Monday.

For the rest of the week, no major storms are predicted in the U.S. Depending on the eventual strength and location of a potential system over the central states next weekend, showers and some thunderstorms will be possible from the Gulf Coast to the Midwest.

Southern Florida should be partly sunny all week with highs between 75 and 80, and nighttime lows 65-70 under partly cloudy skies. The Carolinas look dry all week, with temperatures near 70 dropping to the upper-50s at night.

Temperatures are expected to be well above normal for this time of year across the West and the Plains through the end of the week and close to normal for the East Coast on Wednesday followed by a warming trend for Thursday and Friday.

However, the government’s Weather Prediction Center notes that substantial changes to the forecast are possible going forward, given the uncertainties noted in recent computer model runs.

The holidays are warming, as a result of human-induced climate change. Across the U.S., though not in the Berkshires, thermometers climbed ever higher in late November.

November 2020 was the second-warmest globally on record, according to the National Centers for Environmental Information, falling just behind 2015, the Washington Post reported. Some organizations, such as NASA and the European Copernicus Climate Change Service, assert that 2020 took the top spot.

The observations cite the unmistakable rise in global temperatures as climate change continues. The planet has seen a record number of climate-related disasters this year, supercharged by a warming world.

There are some reasons to believe that climate change, which is warming the waters off New England and the Northeast, may be contributing to an increase in cold-season severe weather and tornado activity there.

Meanwhile, new research suggests that the Arctic Ocean has been warming since the onset of the 20th century, decades earlier than instrument observations would suggest.

The study, published last week in the journal Science Advances, found that the expansion of warm Atlantic Ocean water flowing into the Arctic, a phenomenon known as "Atlantification," has caused water temperature in the region studied to increase by several degrees since 1900.

Francesco Muschitiello, an author of the study at the University of Cambridge, said the findings were worrisome because the early warming suggests there might be a flaw in the models scientists use to predict how the climate will change.

"The Arctic Ocean has been warming up for much longer than we previously thought," Muschitiello told CNN. "And this is something that’s a bit unsettling for many reasons, especially because the climate models that we use to cast projections of future climate change do not really simulate these type of changes."

Information from the Washington Post and CNN was included in the Climate Update.