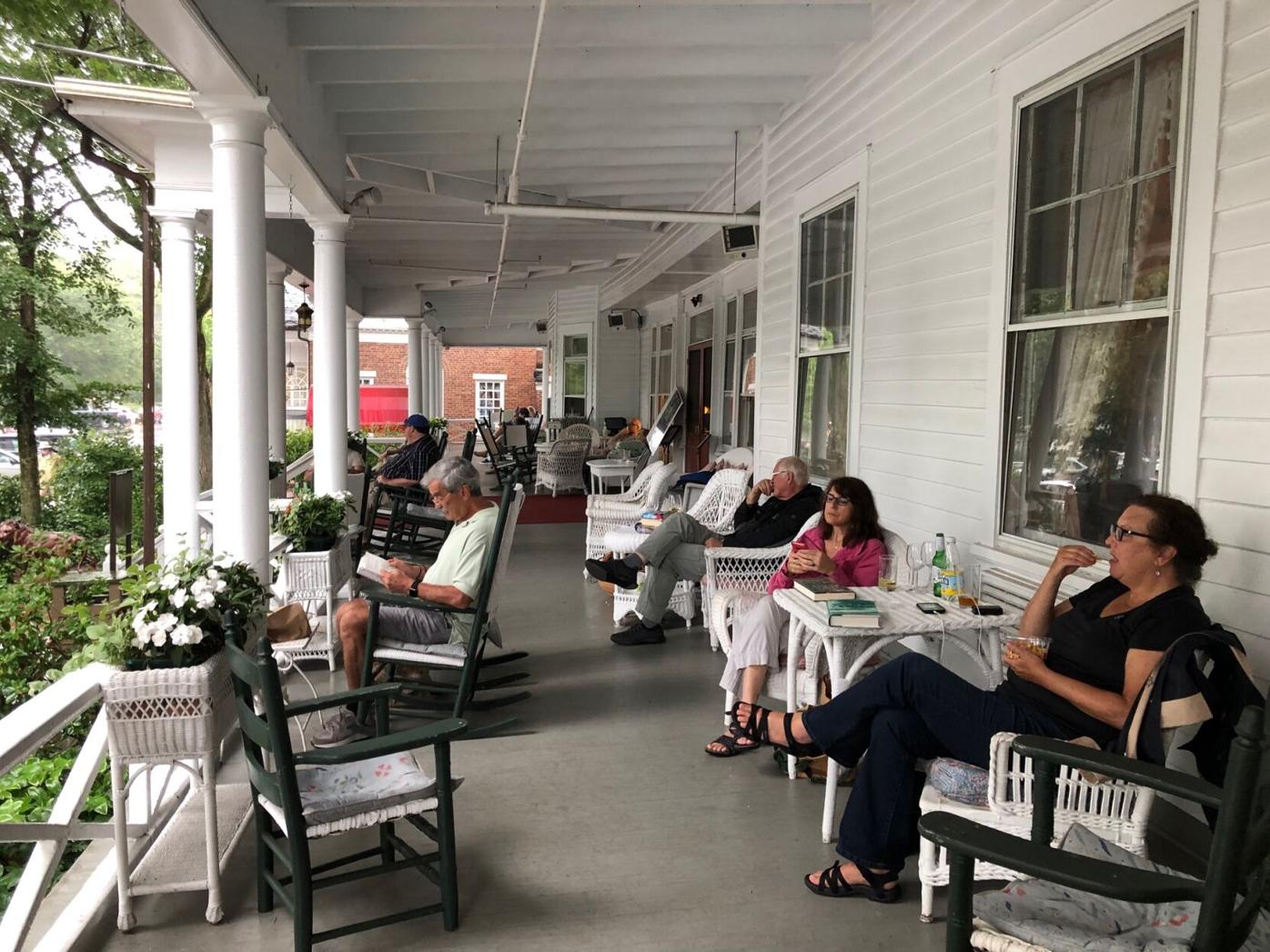 Visitors to the Red Lion Inn sat on the famous porch in Stockbridge watching the rain Sunday afternoon. 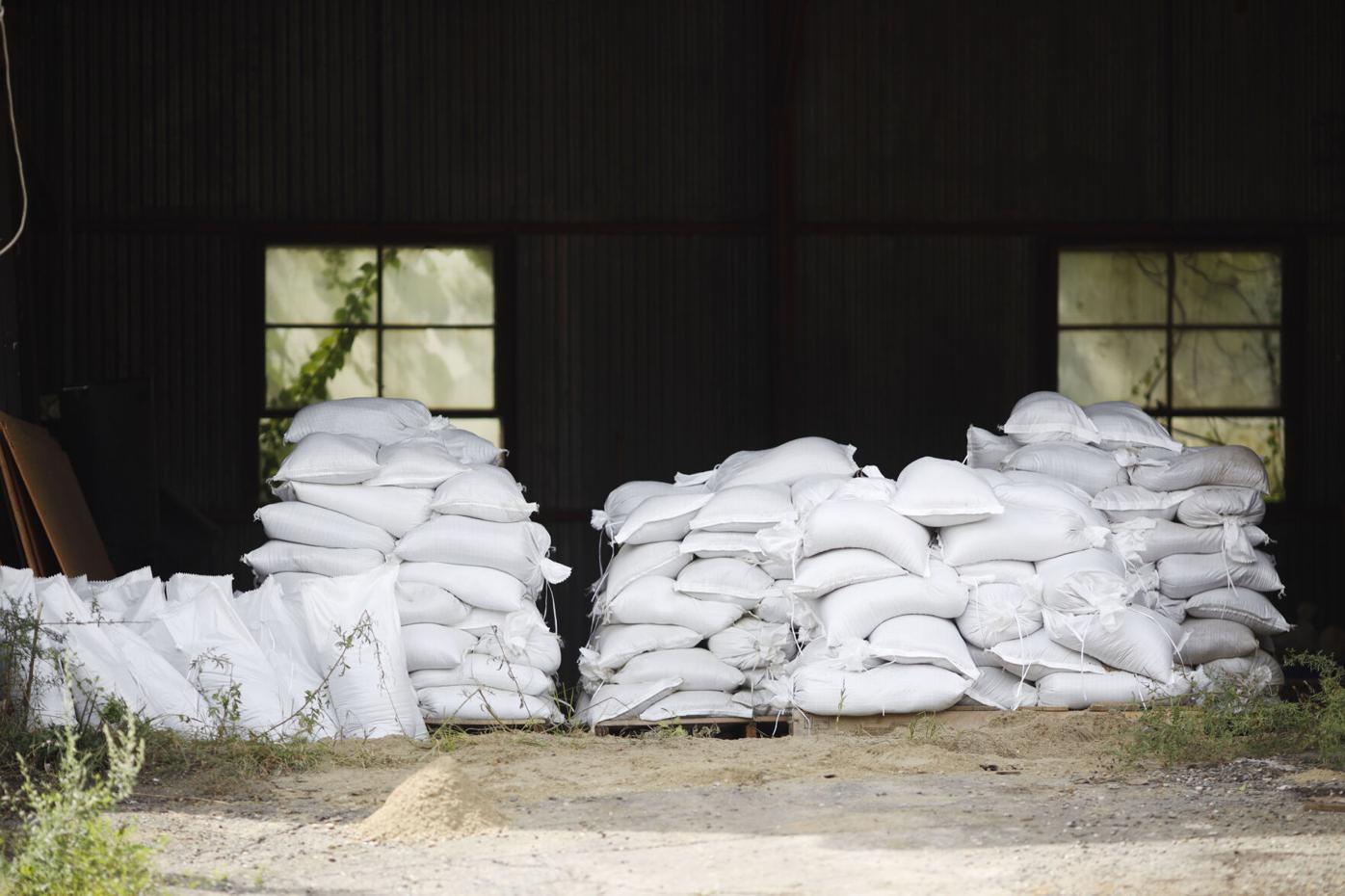 Sand bags were piled in a garage bay at the Pittsfield Department of Public Works Saturday ahead of tropical storm Henri. Flooding could still occur early this week as remnants of the storm linger over the Berkshires.

Visitors to the Red Lion Inn sat on the famous porch in Stockbridge watching the rain Sunday afternoon.

Sand bags were piled in a garage bay at the Pittsfield Department of Public Works Saturday ahead of tropical storm Henri. Flooding could still occur early this week as remnants of the storm linger over the Berkshires.

Buckets of rain, but relatively light winds — that was the calling card that reached the Berkshires Sunday afternoon as a rapidly weakening Tropical Storm Henri took a northwesterly hook from its midday landfall in Westerly, R.I.

Hours of torrential rain prompted the National Weather Service to issue a late-afternoon flood advisory. Noting that a total of 2 to 4 inches was expected from the storm by early Monday, the government forecasters predicted minor flooding throughout the county.

A flood watch was posted through 8 p.m. Monday, since localized storm totals could range from 6 to 10 inches, especially over the higher terrain of the Berkshires. By 5 p.m. Sunday, nearly an inch of rain had been recorded by the weather service at Pittsfield Municipal Airport. Less than half an inch had fallen at Harriman & West Airport in North Adams.

As of 5 p.m. Sunday, Henri’s center was over central Connecticut near Hartford, moving west-northwest on a track across northern Connecticut while decaying rapidly, according to National Weather Service meteorologist Brian Frugis. Top winds were 40 mph.

Monday: Showers, possibly a thunderstorm. High near 75, winds decreasing in the afternoon.

With wind no longer a concern, the prolonged deluge increased the risk for not only flashing flooding but also sharp rises on all streams, rivers and creeks, he cautioned.

As a result of the storm’s extreme weakening, the threat for downed trees, limbs and power outages has been significantly reduced, Frugis added.

The National Hurricane Center’s predicted track for Monday, subject to change, places the storm center over northern Berkshire County before it stalls and reverses direction toward southern Maine, an extremely unusual pattern for a tropical system.

After dumping more rain over the region on Monday, the remnants of Henri will slowly move offshore into the Gulf of Maine by Monday night, so the deluge should taper off gradually. The forecast of up to 5 inches of total rainfall in the Berkshires, potentially more at higher elevations, appears to be on track, with flash flooding and river rises still a hazard from Monday’s ongoing rainfall.

Tuesday and Wednesday will be drying out days, though muggy with temperatures well up in the 80s and humidity still feeling tropical. A few thundershowers are possible each day.

On Thursday, it will remain hot, but the gradual approach of cooler Canadian air may trigger more widespread thundershowers.

The cool-down should give us a clear, refreshing Saturday, with highs in the 70s and nighttime lows in the 50s. Warmth and humidity return next Sunday, along with chances for thundershowers.

The long-range outlook into early September indicates continuing above-normal temperatures, though rainfall totals should trend back toward average for late summer.

Very warm to hot temperatures from the central and southern Plains through much of the East and New England on Tuesday and Wednesday should moderate starting Thursday, leading into a stellar weekend for the region.

Another West Coast heat wave is possible from late this week through the weekend.

In the tropics, there’s a potential new storm developing in the northwestern Caribbean through the western Gulf of Mexico. Rainfall may increase along the central and western Gulf Coast by next Sunday.

An early look at next weekend’s outlook for popular vacation spots in the Northeast:

Meanwhile, heavy rainfall is likely over the upper Mississippi Valley and Midwest toward the end of the week. Parts of this region have been dry recently, so some of the rain may initially be beneficial. However, a multi-day period of significant rainfall could end up being problematic over some areas.

Florida and most of the Southeast will be hot and dry, except for an occasional thunderstorm, through the week, with highs near 90.

For climate watchers, this was a triple exclamation-point wow: For the first time on record, the two-mile high summit of Greenland, appropriately named Summit Station, saw rain rather than snow. That’s because temperatures at one of the coldest spots on Earth — 500 miles above the Arctic Circle — topped the freezing mark for the third time in less than a decade.

At the station, occupied year-round by the National Science Foundation, there is no record of rain since observations began in 1989 at the highest point on Greenland’s ice sheet. And computer simulations show no evidence going back even further, said Thomas Mote, a climate scientist at the University of Georgia.

The warm air fueled an extreme rain event on Aug. 14 that dumped 7 billion tons of water on the ice sheet, enough to fill the Reflecting Pool at the National Mall in Washington, D.C., nearly 250,000 times.

It was the heaviest rainfall anywhere on Greenland’s ice sheet since record keeping began in 1950, according to the National Snow and Ice Data Center, and the amount of ice mass lost was seven times higher than the daily average for this time of year.

Ted Scambos, a senior research scientist at the center based at the University of Colorado-Boulder, said this is evidence Greenland is warming rapidly.

"What is going on is not simply a warm decade or two in a wandering climate pattern," Scambos told CNN. "This is unprecedented."

Jennifer Mercer, program officer for the Office of Polar Programs at the National Science Foundation, said the significant rainfall at the Summit Station means that “we need to consider weather events that we have not had to deal with before in the history of our operations there.”

“Increasing weather events including melting, high winds, and now rain, over the last 10 years have occurred outside the range of what is considered normal," she explained. "And these seem to be occurring more and more."

As human-caused climate change warms the planet, ice loss has rapidly increased. A major U.N. climate report released this month concluded that the burning of fossil fuels led to Greenland’s big melt over the past two decades.

In 2019, Greenland shed roughly 532 billion tons of ice into the sea. During that year, an unexpectedly hot spring and a July heat wave caused almost the entire ice sheet's surface to begin melting.

"We are crossing thresholds not seen in millennia, and frankly this is not going to change until we adjust what we're doing to the air," said Scambos.

Information from CNN and The New York Times was included in this report.