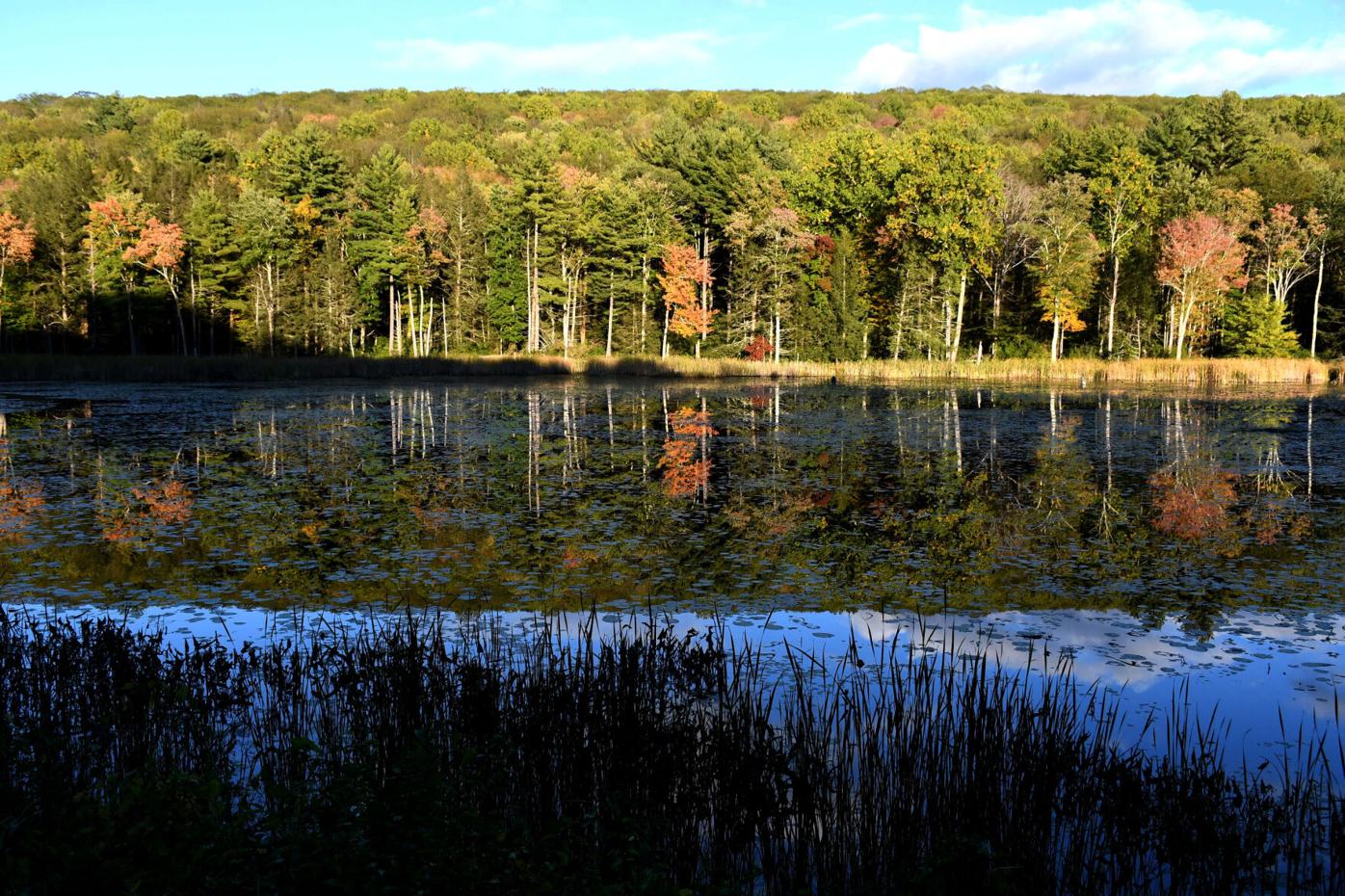 A late-afternoon view of Fountain Pond State Park in Great Barrington, where the leaves are changing but are just not as colorful this year. 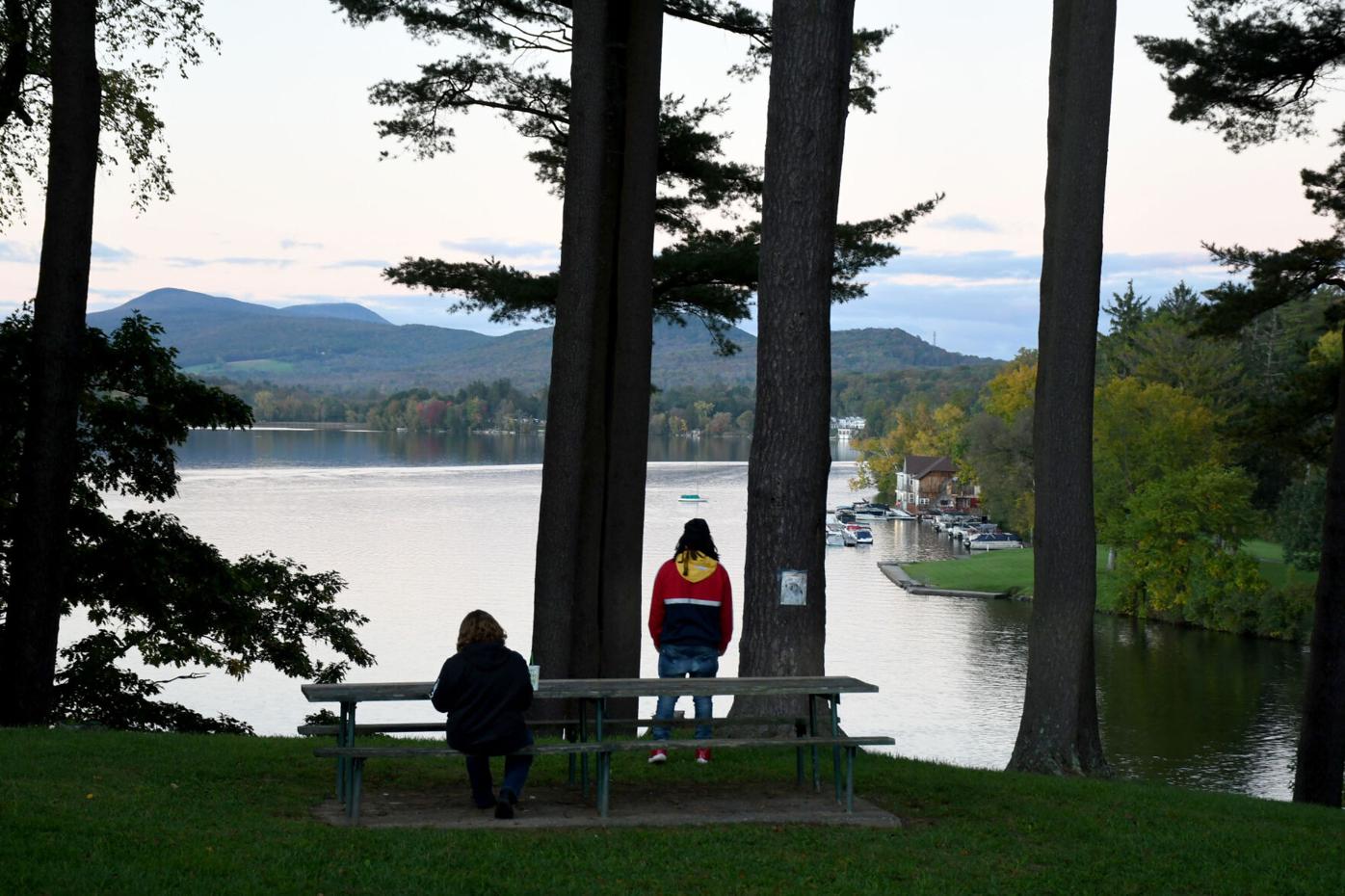 People look north, toward Mount Greylock, at Pontoosuc Lake in Pittsfield on a recent evening. The delayed and muted foliage season is the talk of the Northeast, with peak — if we can call it that this year — one to two weeks later than in the past. For the hospitality industry and for farmers, there’s a silver lining: Longer and later foliage seasons extend tourism toward Halloween, and the growing season is also prolonged with the lack of early frosts.

Fall foliage, such as it is, is finally here as daylight shrinks toward 11 hours by week’s end. But, the colors are muted due to the lack of cold nights and light frosts that accelerate the breakdown of chlorophyll as green leaves segue to yellow and red.

Above-normal daytime highs and mild overnight lows will continue in the days ahead, meaning that the landscape will turn brown and leaves will continue to drop without reaching their typical fall splendor.

Daytime highs in the low 70s and nighttime lows in the 50s continue the above-normal pattern of the past four months; the average range for the Berkshires in mid-October is 40 to 60 degrees.

Once again, rainfall will be minimal this week, but we’re still far above average for the year. A fairly dreary, cloudy weekend, caused by an offshore storm system, will give way to bright sunshine for several days beginning Monday.

“Patchy dense fog” is predicted for early Monday and possibly Tuesday morning. It’s a typical interior New England phenomenon in October, with humidity rising to near 100 percent overnight as milder air aloft overruns and traps the moist, cooler air. It burns off by midmorning as the sun warms the Earth.

Especially on warm days, heat absorbed by the Earth’s surface during the day is radiated into the air, causing minuscule water droplets to form. The result: radiation fog, also known as ground fog.

A strong, fair-weather system building southwestward from Maine will keep skies mostly clear in western New England, with temperatures 10 to 15 degrees above normal, despite the lower angle of sunlight. Tuesday should be especially brilliant.

On Wednesday and Thursday, a mix of sun and clouds is predicted, with temperatures remaining well above average.

The extended outlook from the Climate Prediction Center indicates above-normal temperatures, and rainfall near average, through Oct. 23 for our region.

An unusually strong windstorm is pushing into the Pacific Northwest and south to Central California on Monday; then the system moves eastward, to the Plains, by Wednesday.

An early look at next weekend’s forecast for popular Northeast destinations:

AccuWeather.com predicts 40- to 60-mile-per-hour winds in much of coastal and interior California, but several areas from interior central portions of the state to the Nevada border could see 60- to 80-mph winds. Hurricane force is 74 mph and up. Blowing dust, travel difficulties and delivery disruptions are possible, as well as spreading wildfires.

The coldest air of the season will push through the western third of the nation, with heavy mountain snow in the Cascades and northern Rockies. Daytime highs will be 15 to 30 degrees below normal through Thursday.

In the Midwest, a storm system is likely to cause severe thunderstorms from the mid-Mississippi Valley to the Great Lakes on Monday night.

The strong storm tracking northeastward across the northern Plains on Wednesday into early Thursday will cause heavy rain over the Dakotas and parts of the southern Plains. Some of this moisture might continue into the eastern U.S. late into the weekend, but rainfall totals should be moderate.

Florida will see partial sunshine, with highs near 85 through the week, but clouds and rain will dominate the upcoming weekend.

The delayed and muted foliage season is the talk of the Northeast, with peak — if we can call it that this year — one to two weeks later than in the past. For the hospitality industry and for farmers, there’s a silver lining: Longer and later foliage seasons extend tourism toward Halloween, and the growing season is also prolonged with the lack of early frosts.

“There has been and will be more variability year-to-year and more uncertainty,” said Andy Finton, a forest ecologist with the Nature Conservancy in Boston. “With climate change, it just adds more complexity to an already complex phenomenon. Most studies show that it’s happening later and later, but the verdict is still out as to how far and how fast that will go. The general trend is, yes, fall color change will continue to progress later and later in the year.”

Warmer temperatures also could change the distribution of colorful tree species, Finton noted. New England could see fewer of the brilliant red sugar and red maple trees, as Southern species that flourish in the warmer weather could expand northward. Some of the Southern species, like oak or pine trees, have more muted hues.

“I love the autumn — that melancholy season that suits memories so well. When the trees have lost their leaves, when the sky at sunset still preserves the russet hue that fills with gold the withered grass, it is sweet to watch the final fading of the fires that until recently burnt within you.”

For Finton, fall color is an important indicator of a forest’s short-term and long-term health. When trees show vibrant fall colors, it is a sign that the forest is getting the appropriate amount of precipitation and livable temperatures.

“Anecdotally, when I see the colors hit the ball out of the park, I know that things are working well in that forest,” he said. “The ecological processes are functioning in a way that allows that forest to do all the other things we depend on it for — clean air, clean water, wildlife habitat, pulling carbon out of the atmosphere.”

Material from The Washington Post was included in the climate update.

When is peak fall foliage in the Berkshires? Don't blink, you might miss it

What does our rainy summer mean for New England's foliage forecast? Don't worry, your picture-perfect fall is on its way.