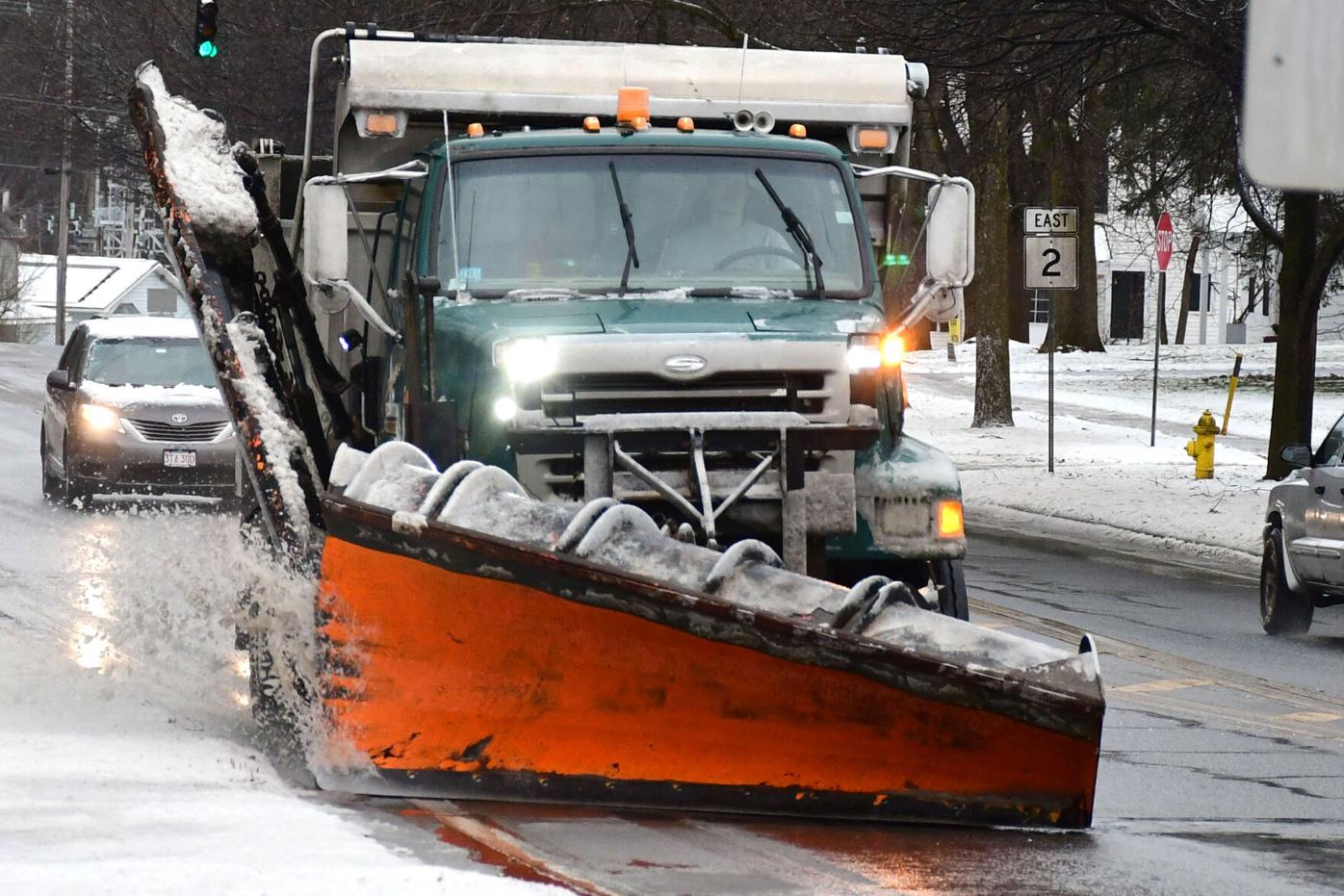 A snowplow clears wet snow from the roadway on Main Street in Williamstown near the intersection of Water Street on Sunday afternoon. 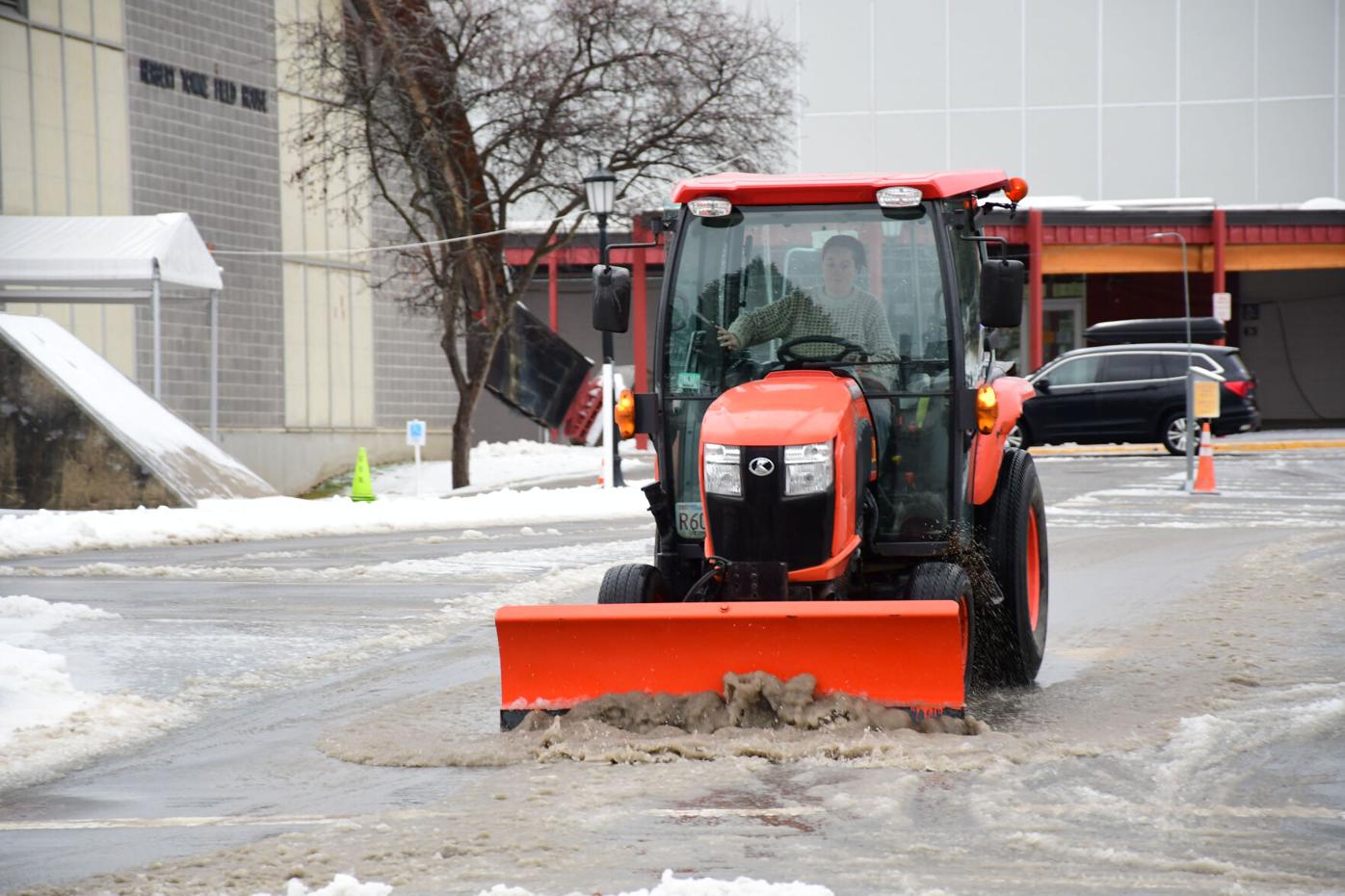 A small plow clears slush from the parking lot at the Towne Field House and the Lansing Chapman Rink on the Williams College campus on Sunday afternoon. 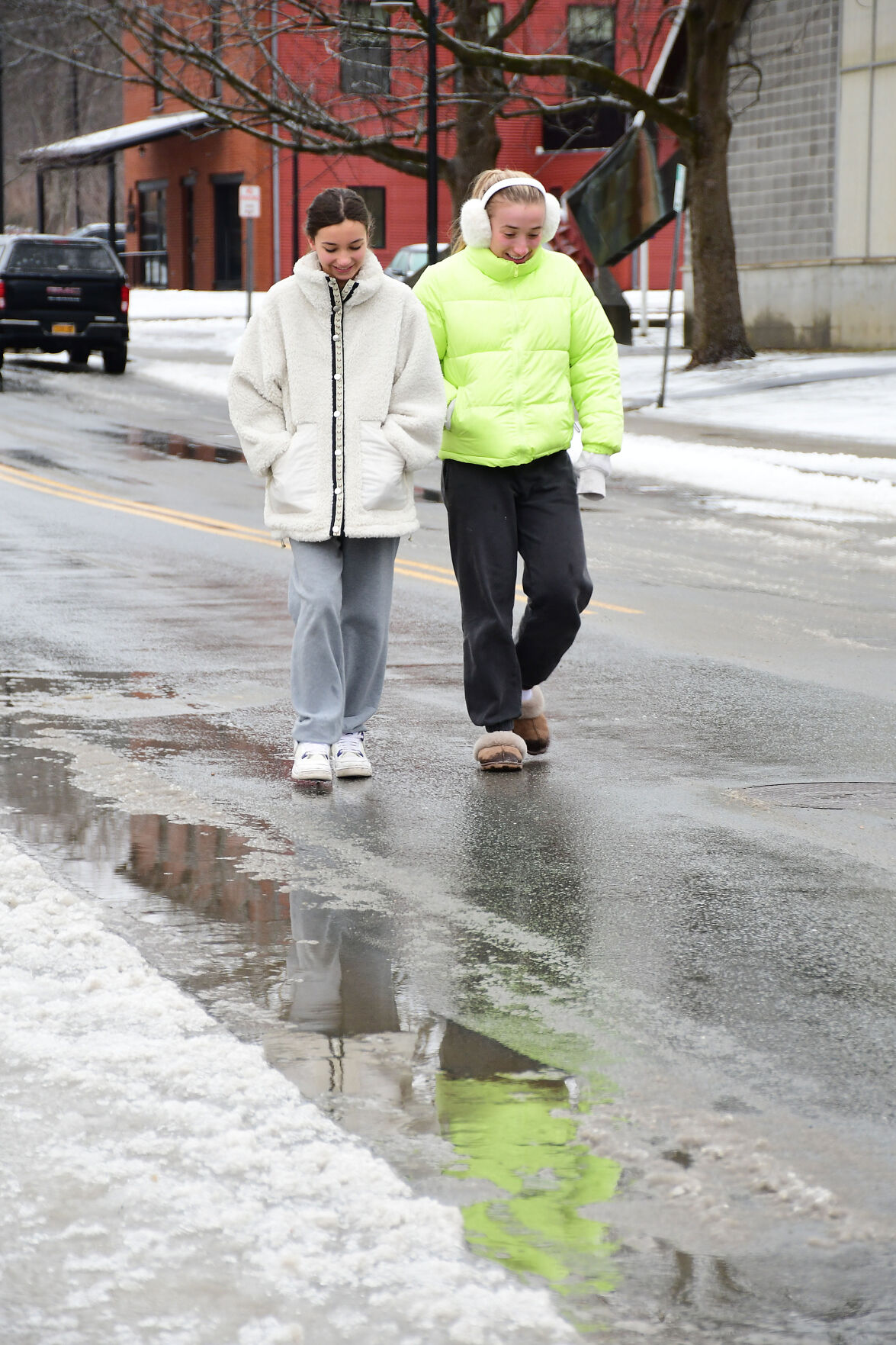 With most sidewalks covered in snow and ice, Williams College first-years Gia Gambino and Gabby Fazzalari walk on the roadway as they traverse Latham Street in Williamstown on Sunday afternoon. 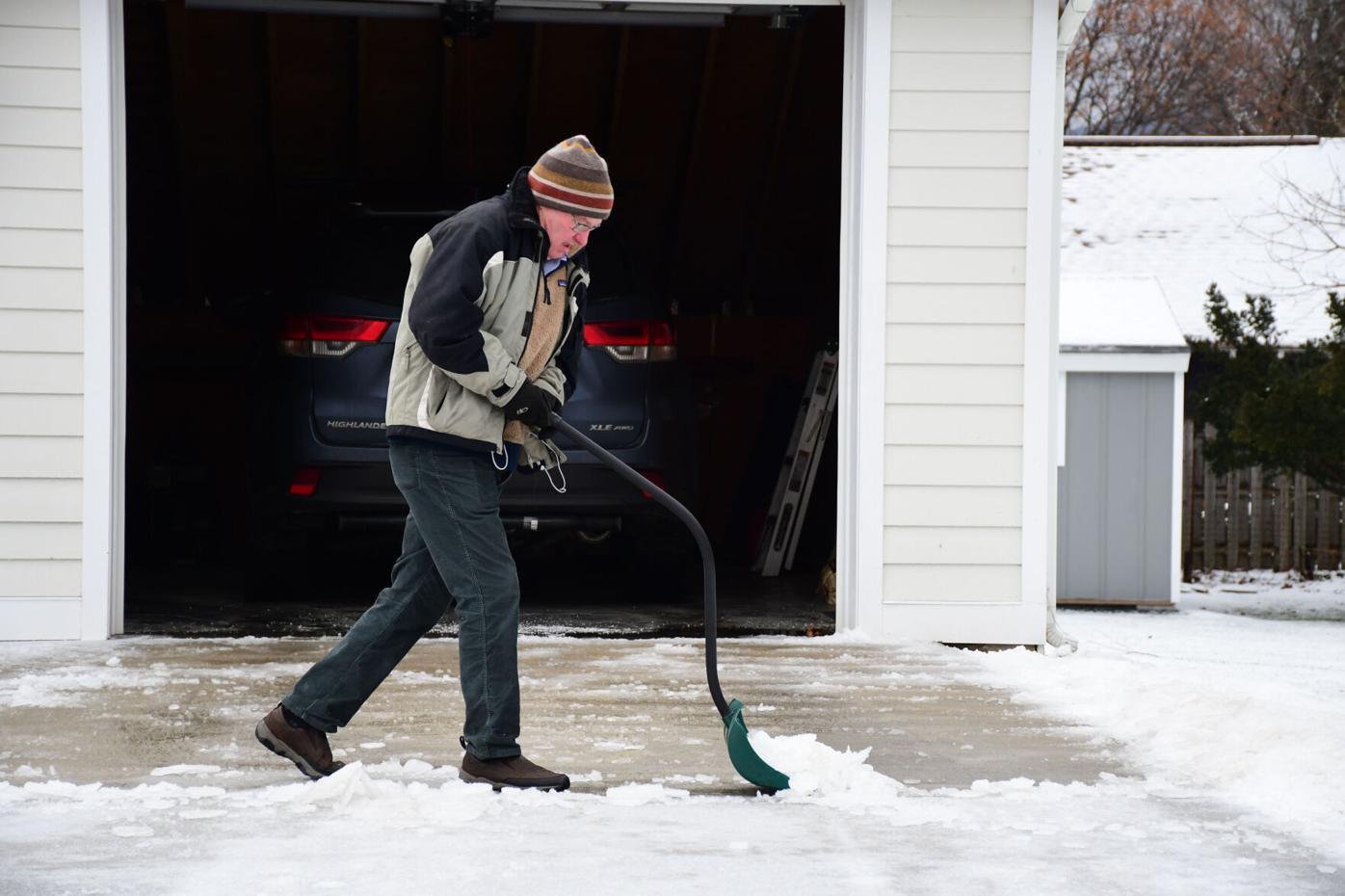 Tom Kivney, of Talcott Road in Williamstown, shovels the driveway in front of his home on Sunday afternoon.

A snowplow clears wet snow from the roadway on Main Street in Williamstown near the intersection of Water Street on Sunday afternoon.

A small plow clears slush from the parking lot at the Towne Field House and the Lansing Chapman Rink on the Williams College campus on Sunday afternoon.

With most sidewalks covered in snow and ice, Williams College first-years Gia Gambino and Gabby Fazzalari walk on the roadway as they traverse Latham Street in Williamstown on Sunday afternoon.

Tom Kivney, of Talcott Road in Williamstown, shovels the driveway in front of his home on Sunday afternoon.

"Leaving any bookstore is hard . . . especially on a day in January, when the wind is blowing, the ice is treacherous, and the books inside seem to gather together in colorful warmth."

A brutal blast of an Arctic deep-freeze, also known as the “polar vortex,” is on deck for early this week, following Sunday’s brew of freezing rain and sleet. Area roadways were so treacherous that many were impassible from early- to mid-morning until they could be treated by road crews.

My police radio was crackling with multiple reports of accidents, including cars into ditches. At one point, police in Lenox had difficulty reaching a motorist because the roads near Tanglewood were like skating rinks.

The National Weather Service in Albany summed up the forecast for tonight through Tuesday night: Dangerous cold could cause frostbite and hypothermia, and wind chill alerts will be needed.

How cold? By dawn Tuesday, zero or thereabouts. The high for Tuesday: 5 degrees! Then, the late-night low will plunge to minus 6 or lower. By later in the week, we should welcome a return to the average temperature range for week 2 of January: A low around 15, and a high near 30 or slightly above.

How windy? Gusts as strong as 40 mph. What’s needed? Parkas, gloves, hats and a cup of tea.

Here in the Berkshires, “with a tenth to a quarter inch of ice potentially on trees from the daytime freezing rain, the strong winds may cause tree branches to break resulting in some power outages,” according an online post by government forecaster Christina Speciale in Albany. That threat should ease by mid-morning today.

Another concern for this morning is a band of snow showers caused by extremely cold air passing over the still partially-unfrozen Great Lakes. That could drop a quick inch or two of snow, especially in the southern Berkshires, affecting the return to work and school.

Tuesday: Sunny, near 5. Partly cloudy overnight, low around 5 below.

Thursday: Mostly cloudy, high near 35, nighttime low in the upper-teens.

A chunk of the frigid air mass from northern Alaska, the Yukon and the Northwest Territories in Canada is finally making it into the Northeast by tonight, courtesy of a deep bend in the jet stream. The extreme cold on Sunday morning sent temperatures down to a record-setting minus 63 in Chicken, Alaska, as well as Deadmen Valley and Rabbit Kettle, both in the Northwest Territories.

For next weekend, seasonable temperatures are expected, though there’s a chance of some snow on Sunday.

The outlook for Jan. 16-22 suggests slightly below normal temperatures and slightly above average snowfall for western New England, according to the Climate Prediction Center.

The incursion of Arctic air is also affecting the Upper Midwest and Northern Plains as the week begins, along with dangerous wind chills. Elsewhere, quiet weather and a warming trend will be welcomed in the Great Plains and much of the West.

At midweek, moderate to heavy rainfall is expected in the Pacific Northwest, the Four Corners states and then into the Southern Plains and Lower Mississippi Valley by Thursday and Friday. Chances for wintry weather could ramp up by next weekend for the Midwest and Great Lakes region, along with an outside chance of snow in the Northeast.

The Big Chill will ease in the East starting Wednesday, while the central U.S. will be much milder than normal, especially in the Plains and the Mississippi Valley.

After early-week showers in Florida, sun should return from Wednesday onward, with highs in the 70s. The Carolinas should be mostly sunny after some rain today, with highs near 60.

More than four in 10 Americans live in a county that was struck by climate-related extreme weather last year, according to a new Washington Post analysis of federal disaster declarations. Even though all of New York state, Vermont and Connecticut were included, Berkshire County and the rest of Massachusetts was not.

But more than 80 percent of Americans endured at least one heat wave, including the Berkshires. Heat wave data from roughly 7,500 NOAA temperature monitors across the nation yielded the finding.

Although extreme heat is not officially considered a disaster, it is one of the most fatal forms of severe weather. Officials say that at least 227 people were killed by the record-shattering heat dome that engulfed the Pacific Northwest in late June — a figure that is almost certainly an undercount.

In the country that has generated more greenhouse gases than any other nation in history, global warming is expanding its reach and exacting an escalating toll, the Post stated in its weekly climate report.

At least 656 people died amid the onslaught of disasters, media reports and government records show. The cost of the destruction tops $104 billion, according to the National Oceanic and Atmospheric Administration, even before officials calculate the final toll of wildfires, drought and heat waves in the West.

There is little doubt that the future will be worse. Steadily rising temperatures heighten the risk of wildfires, turbocharge rain storms, exacerbate flooding and intensify drought.

The U.N. climate conference in Glasgow, Scotland, produced pledges that put global average temperatures on track to rise about 4.5 degrees Fahrenheit by the end of the century — an amount of warming that would transform once unthinkable disasters into near-annual occurrences.

Even though climate change will make frigid weather less likely, some scientists have suggested that warming in the Arctic can lead to fluctuations in the polar vortex, allowing tongues of cold air to lash out into lower latitudes such as New England. Other studies indicate that warmer winter temperatures provided fuel for the late-season thunderstorms that gave rise to December’s twisters in the South and Midwest.

Some recent events were made so extreme by rising temperatures that they break statistical models. The Pacific Northwest heat dome, which scientists say was “virtually impossible” without climate change, was one such event, said Michael Wehner, a climate scientist at Lawrence Berkeley National Laboratory at the University of California. Last month’s Marshall Fire in Colorado is likely to be another.

The Outlook is today's look ahead at the week's weather and climate change, their impact on the Berkshires and beyond. Clarence Fanto can be reached at cfanto@yahoo.com.