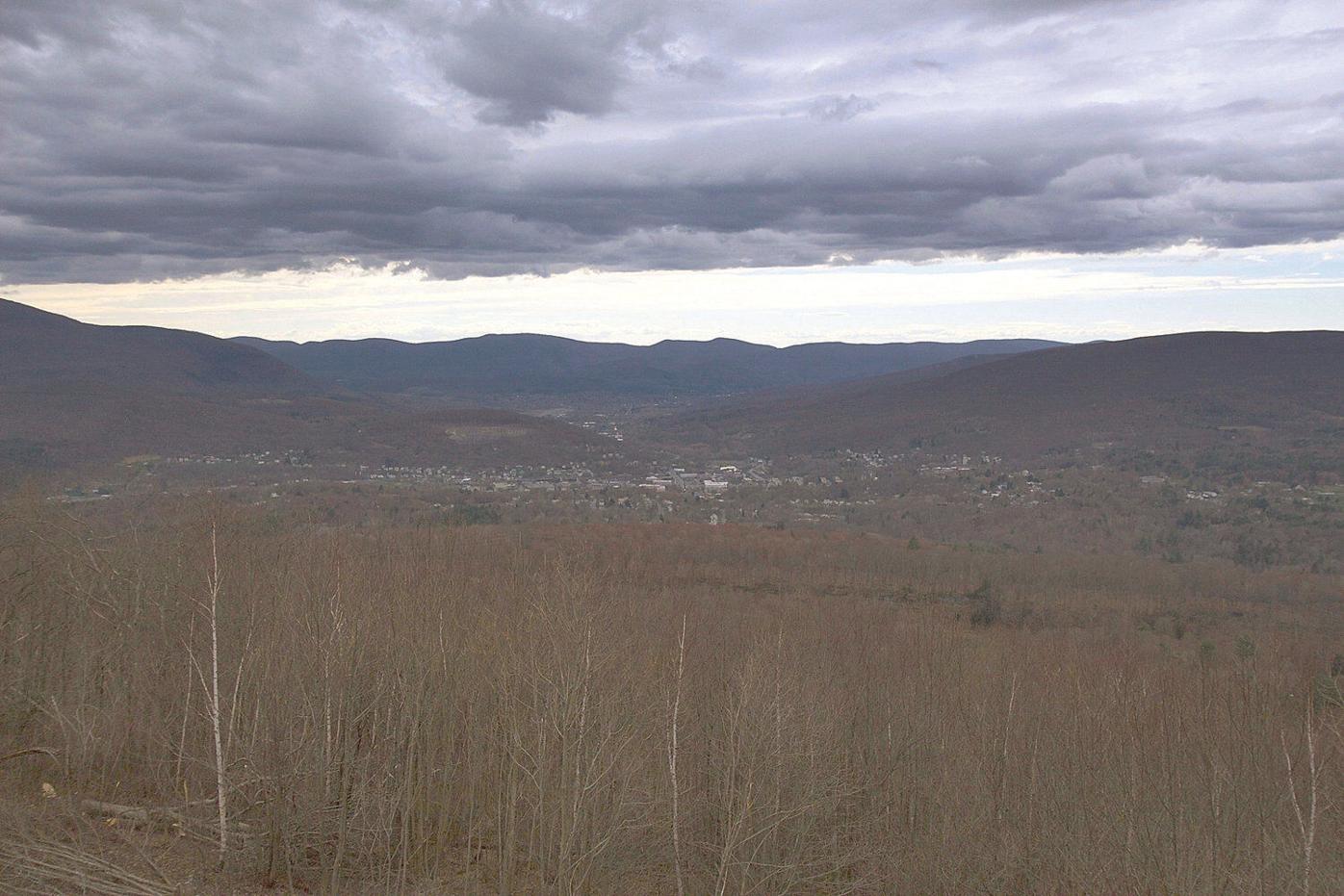 Spots along the Mohawk Trail offer breathtaking views of the Berkshires. 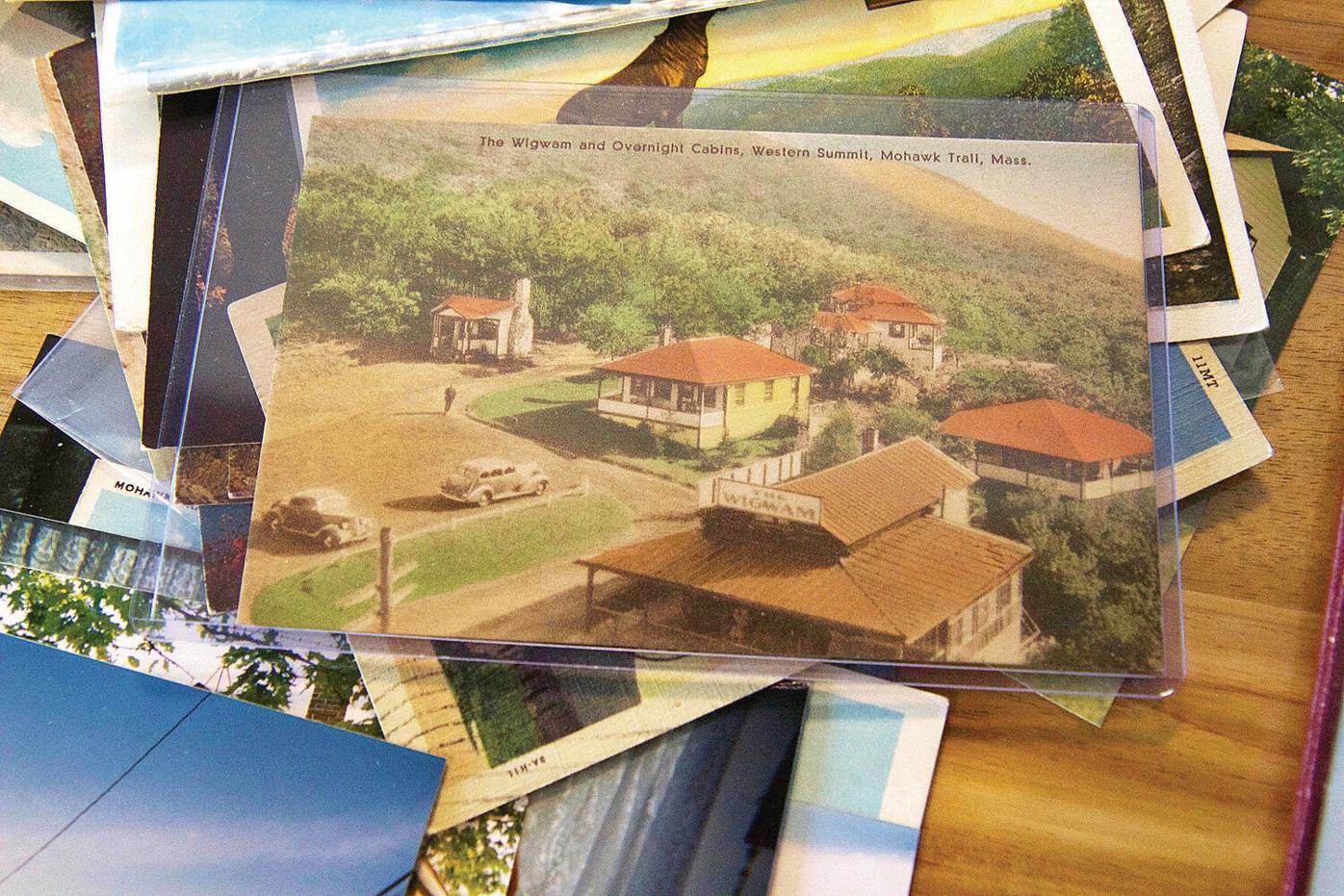 In the process of re-opening the Wigwam Western Summit - which sits on the Mohawk Trail in North Adams - the new owners studied old postcards from the area. 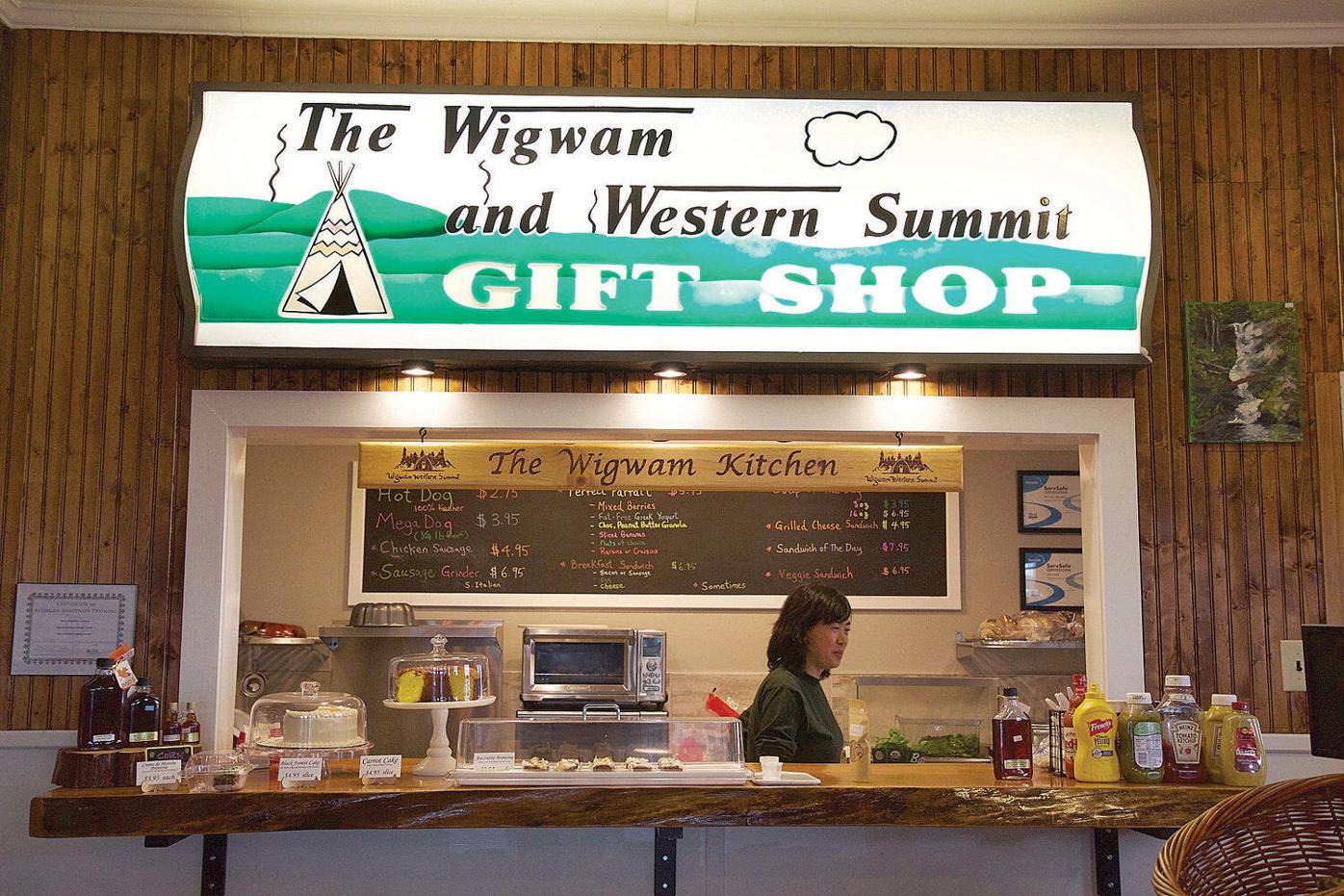 The original sign of the Wigwam Western Summit in North Adams now hangs over the kitchen. The new owners of the establishment have a new sign that shows a wigwam, instead of a teepee. 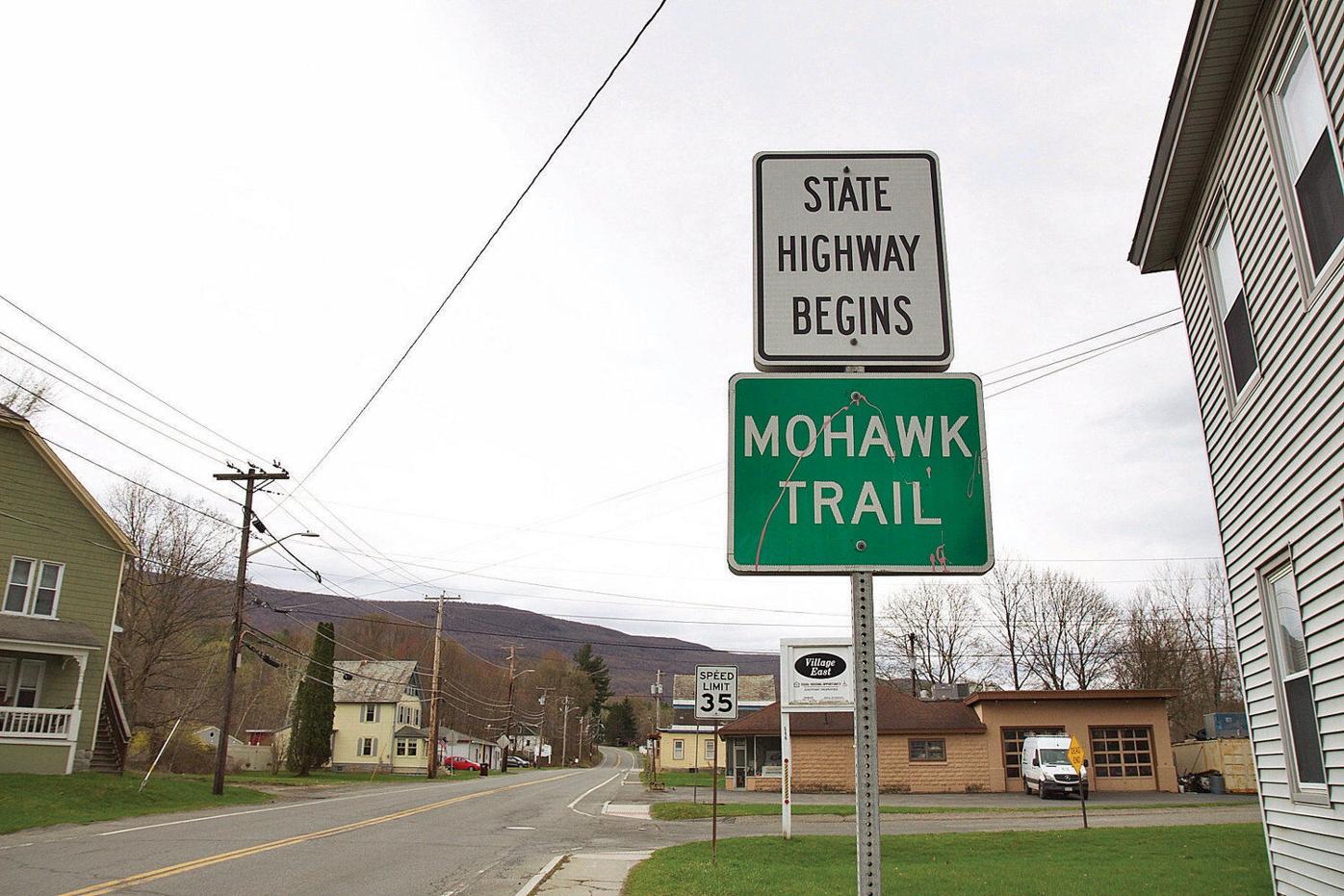 The Mohawk Trail, or Massachusetts Route 2, is a roadway between Williamstown and Montague.

Spots along the Mohawk Trail offer breathtaking views of the Berkshires.

In the process of re-opening the Wigwam Western Summit - which sits on the Mohawk Trail in North Adams - the new owners studied old postcards from the area.

The original sign of the Wigwam Western Summit in North Adams now hangs over the kitchen. The new owners of the establishment have a new sign that shows a wigwam, instead of a teepee.

The Mohawk Trail, or Massachusetts Route 2, is a roadway between Williamstown and Montague.

When they lived in the western-most parts of what's now known as Massachusetts, the People of the Waters That Are Never Still kept busy with activities similar to those advertised today to tourists coming to the Berkshires.

They hiked the woods and hunted black bear, deer and turkey. They fished the waterways, and they planted the soil with corn, beans and squash. They created beautiful, artisanal things, from pottery to decorated clothing. In wintertime, they hunkered down in their wigwams and told stories. In spring, they emerged and gathered sap to make maple syrup.

Native scholar Dorothy Davids, a member of the People of the Waters That Are Never Still — also known as the Mohican tribe — described their way of life in her 2004 booklet, "A Brief History of the Mohican Nation Stockbridge-Munsee Band." Davids' narrative recounts her tribe's long-ago arrival in North America, its settlement in the valley along the Mahicannituck River, and its encounter with Henry Hudson, who sailed up that river in 1609 and provided its eventual new name.

Following decimation by disease, conflicts with Mohawks over the fur trade, fighting for the American Revolution, Christianization and then expulsion by colonizers in the 18th century, about 1,500 members of the Mohican Nation Stockbridge-Munsee Band survive today.

Half of the tribe's population lives on or near reservation land in Wisconsin. None have an obvious presence in the portion of their homelands between the Hoosic and Westfield rivers, dubbed just over a century ago as the "Mohawk Trail."

Today, most histories about the section of Massachusetts Route 2 between Williamstown and Montague sound like the summary in the Mohawk Trail Association's guidebook.

They start with the millennia that indigenous people used footpaths between what are now called the Hudson and Connecticut river valleys. They detail how the Pocumtucks, once located in present-day Deerfield, shared salmon fishing spots with the Mohawks, who traveled over from present-day northern New York.

Finally, they acknowledge the introduction of Europeans, how they wanted native land, how this led to battle between the Mohawks and the Pocumtucks, and how Wampanoag sachem Metacom (also known as King Philip) passed over the trail to try and recruit native people to go to war against the colonizers, a war he eventually lost.

Apart from small mentions in sources like in late Williams College graduate Robert Quay's 2004 senior thesis, "Mohawks, Model Ts, and Monuments," there is little indication around the Mohawk Trail — in its histories or along the road — of Mohicans. It's difficult to find reference to the fact that a chunk of the land once belonged to the tribe, or how they, like Mohawk, Pocumtuck and Wampanoag descendants, are still alive today.

The disconnect goes both ways: the Mohican Nation's tribal historic preservation office manager, Sherry White, said she doesn't know anything about the Mohawk Trail, either.

"[I]n fact, I never heard of it for the Stockbridge-Munsee Tribe," she said.

Recovering the past and present

The Stockbridge-Munsee Band lived in Stockbridge prior to its removal West. While the Berkshire County portion of the Mohawk Trail falls within what the tribe describes as its territory, there is little archeological evidence and no recent excavations showing historical indigenous settlement there. This means White's office, which operates under the 1990 federal Native American Graves Protection and Repatriation Act, wouldn't be called out to protect resources there.

Mitchell Mulholland, who directed UMass Archaeological Services for 27 years before retiring in 2011, has surveyed the Mohawk Trail, including the area in Berkshire County. He said steep slopes, cold temperatures and sub-par soils in the uplands made archeological finds unlikely.

Mulholland added that in the flatter, warmer and more promising sections by the Hoosic River in North Adams and Williamstown, heavy development, along with amateur digs from the 1940's ruined potential sites. Some of those unsanctioned digs did uncover millennia-old projectile points in Norther Berkshire, though no evidence of indigenous people living in the area.

Another reason for opaque native representation around the Mohawk Trail: the enormous loss that happens whenever colonizers move into indigenous homelands.

Davids' laid this out in her booklet about the Stockbridge-Munsee Band. She wrote that the changes the new Americans brought to her tribe "worked together to cause a breakdown in their traditional Mohican life and beliefs."

Thousands died from conflict and disease. Colonial governments drew boundaries on the land — indigenous resources — and forced dependency on white people. European languages replaced the Mohican one. Tribe members sold cultural artifacts in times of poverty. And they ultimately had to leave the place they had lived for many, many generations.

According to Davids, the Stockbridge-Munsee Band began working in 1969 to both reclaim its past and assert its presence. Tribal members made numerous trips to eastern New York and western Massachusetts to research their history. They collected papers, artifacts and repatriated items at the Arvid E. Miller Memorial Library Museum.

"Over the past 60-some years, the Stockbridge-Munsee have not only survived," Davids wrote. "The community has grown."

In the process of re-opening the Wigwam Western Summit — which sits on the Mohawk Trail in North Adams — in October 2018 with her partner, Wayne Gelinas, owner Lea King did her research.

She read in the library, spoke with the Wigwam's former owners and studied historic postcards. She learned about the Mansfield sisters, the four developers who opened the shop to coincide with the Mohawk Trail's official opening as an auto road in 1914. She saw the old images depicting the tower that once stood to the side of the main building. She understood that, prior to its latest rendition, the Wigwam sold Native American souvenirs.

"I try to be as authentic as I can about the Wigwam's history," King said.

She kept, for instance, the shop's old lit-up sign, which depicts not a wigwam, but a Plains-style teepee. King chose to hang it up over the kitchen window inside the store, however, so Gelinas could erect the Wigwam's new logo outside. (Among other things, it depicts an actual wigwam.)

"I could do all the Googling that I want, but there's not a lot of information," King said.

She recently identified tribes — Mohawk, Mohican, Wampanoag and Pocumtuck — associated with the Mohawk Trail so she could name the Wigwam's renovated cabins after them. King did this out of what she described as honor, though she welcomed any guidance on how to represent indigenous people at the Wigwam.

"I don't want to offend anyone," she said, adding that she didn't want to commercialize another culture for profit, either.

King has a markedly different attitude than the early purveyors of the Mohawk Trail. Stan Brown, whose father, Harold Brown, opened Brown's Garage around 1920 to serve the Ford Model T's climbing the hills of Florida, said the original businesses capitalized on a simplified — and inaccurate — tale of a mythological native people long gone.

"People took advantage of the Indian theme," Brown said. He added that people also "mixed it up some" when they marketed symbols belonging to America's geographical West, such as the teepee on the Wigwam's old sign.

This region's mischaracterization of indigenous people in order to promote tourism is documented at length in Quay's 2004 thesis, "Mohawks, Model Ts, and Monuments."

Quay examined "The Pageant of the Mohawk Trail," which local actors performed four times in North Adams' Hoosac Valley Park to publicize the completion of the Mohawk Trail touring route. It purported to trace North Adams' local history from the receding of glacial waters thousands of years ago all the way up to the 20th century, though the pageant relied on more national themes of westward expansion.

"Its romantic narrative portrayed the history of the Mohawk Trail as an inevitable progression from primitive Indian wilderness through Anglo pioneer simplicity to modern Anglo American civilization," Quay wrote.

The telling of this narrative included no actualnative people, as far as Quay could tell. For the initial pageant episodes, such as the "First Indian" paddling a canoe, or the "French and Indian" allies attacking English colonizers at Fort Massachusetts, he wrote that it appeared to be all white people dressed in dark suits filling the native roles.

After the pageant's mid-1700's episode and once the "early settlers" came in, Quay noted, native people — play-acted or otherwise — disappeared from the scene all together. The pageant erased from history not only the surviving members of tribes indigenous to the Mohawk Trail area, but also the conflict between the European "early settlers" and the native people they displaced.

According to Quay, this "presented a distorted history ... that absolved all European Americans of responsibility for the violent conquest of Indians."

Next week, we'll examine how current Berkshire County residents are beginning to face the history of violent colonial conquest.