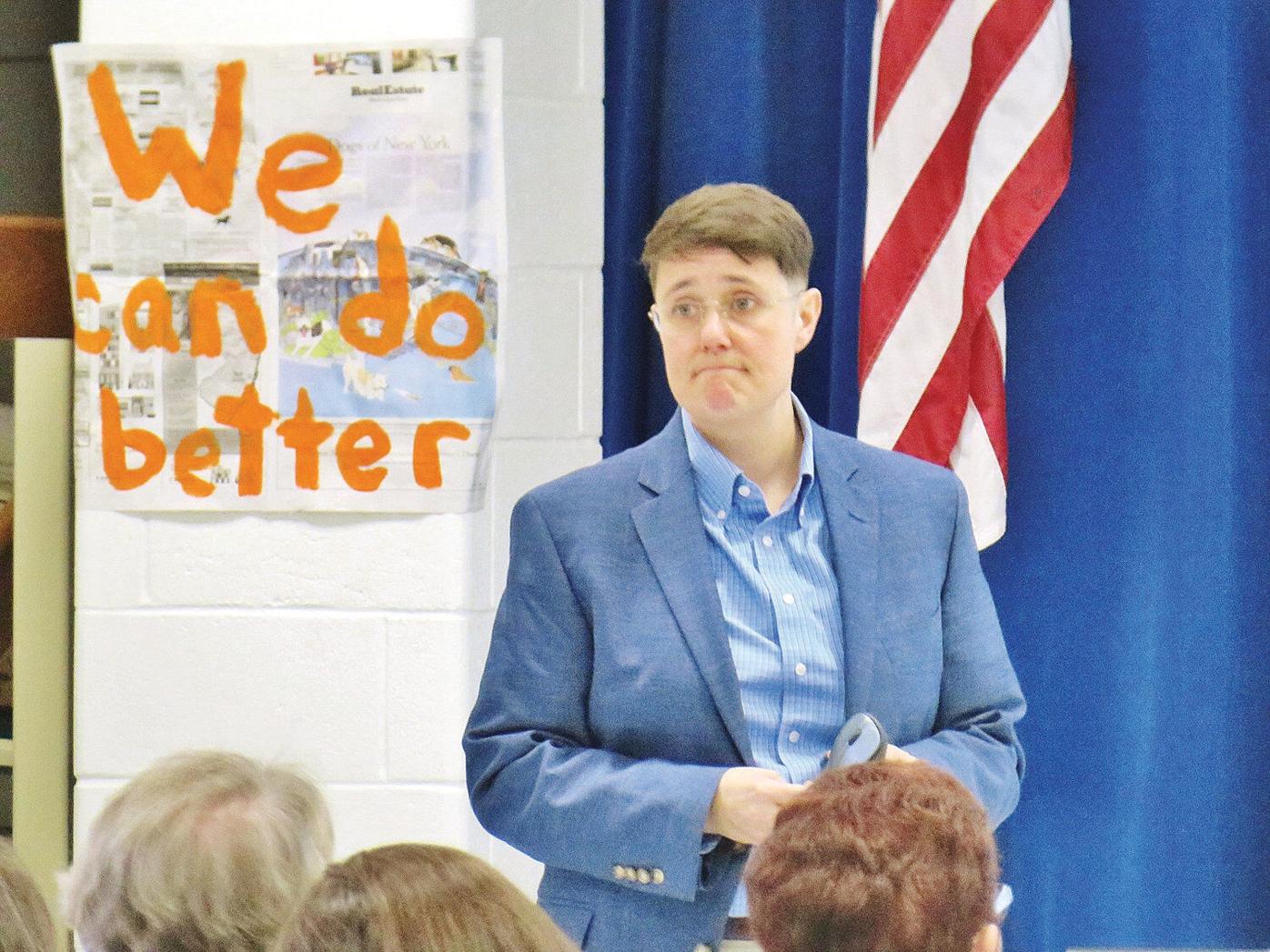 "Students in Massachusetts as a whole are doing well, but the Berkshires aren't," local licensed clinical social worker Jennifer Daily said during a Nov. 6 workshop titled "The Trauma Sensitive Teacher: A Practical Approach." Last year, about 35 teachers attended her workshop. This year, 107 registered during a countywide educators' professional development day. 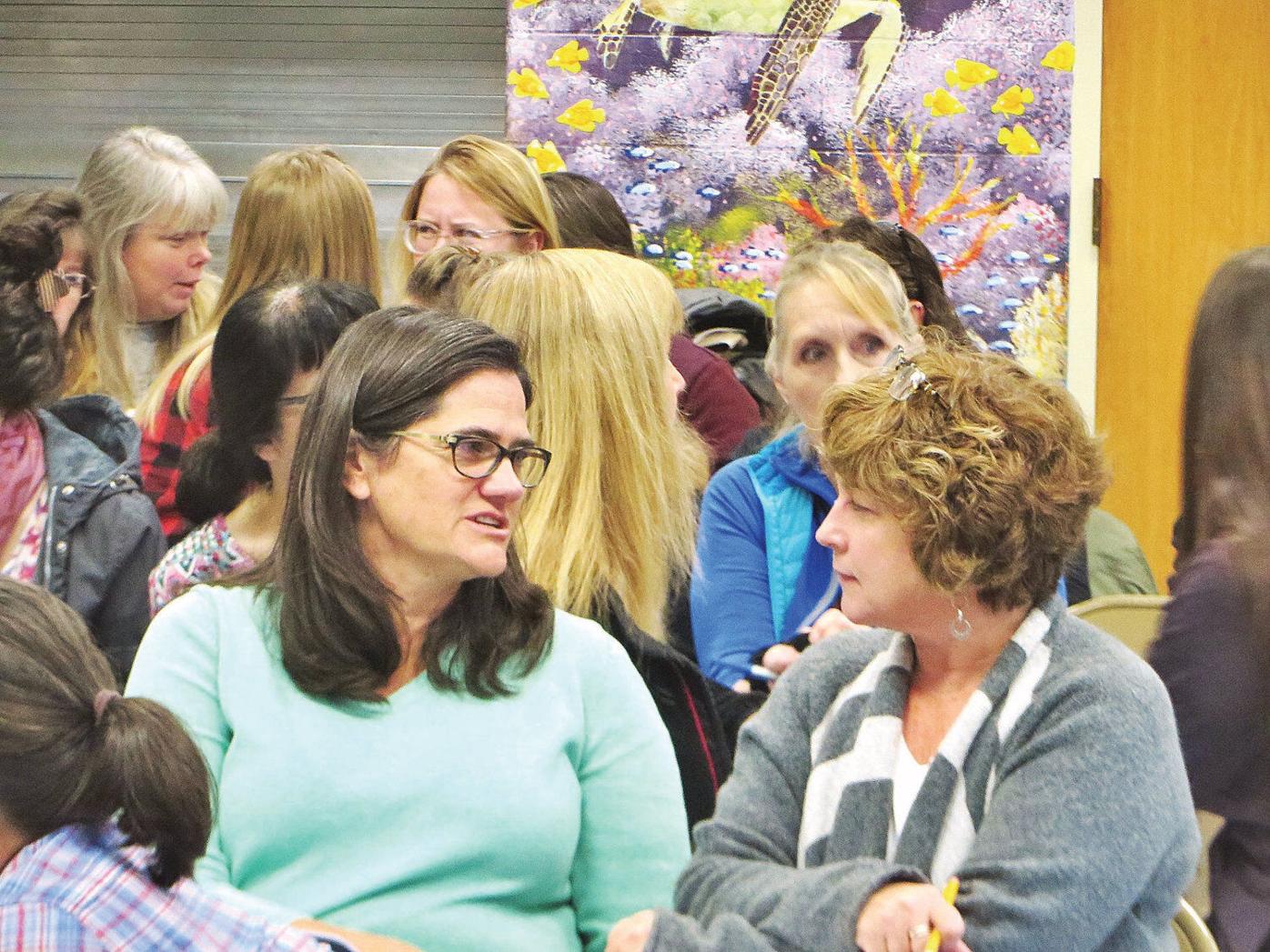 Educators talk about the range of issues facing children in their classrooms, during a Nov. 6 workshop titled "The Trauma Sensitive Teacher: A Practical Approach," held at Morris Elementary School in Lenox. More than 100 school professionals participated in the workshop, during a county-wide educators' professional development day.

"Students in Massachusetts as a whole are doing well, but the Berkshires aren't," local licensed clinical social worker Jennifer Daily said during a Nov. 6 workshop titled "The Trauma Sensitive Teacher: A Practical Approach." Last year, about 35 teachers attended her workshop. This year, 107 registered during a countywide educators' professional development day.

Educators talk about the range of issues facing children in their classrooms, during a Nov. 6 workshop titled "The Trauma Sensitive Teacher: A Practical Approach," held at Morris Elementary School in Lenox. More than 100 school professionals participated in the workshop, during a county-wide educators' professional development day.

LENOX — Against the backdrop of a serene undersea mural, more than 100 local educators crammed into a room to talk about a far less cheerful subject of how childhood trauma plays out in their schools and classrooms.

Jennifer Daily, a Housatonic-based licensed clinical social worker, asked participants to list off the signs of trauma manifesting in their classrooms.

"That's that flight or fight effect we hear about," Daily said. "What else?"

The examples came fast at the Nov. 6 workshop, "The Trauma Sensitive Teacher: A Practical Approach," held in the Morris Elementary School cafeteria as part of a countywide professional development day.

"Hoarding food because they want to take it home."

"Hiding sticks and rocks in their pockets so they can feel safe."

Daily paused after this last response and asked the teacher, "How old is that child who's doing that?"

"For many children in the Berkshires, school is the safest place they go to," Daily said.

Daily said that as substance abuse, incarceration, mental illness, community violence and neglect proliferate, so, too, will the negative impacts on children — and subsequently in classrooms.

"We're in a crisis," she said. "This is a really big deal that this is happening in your classrooms and you're at the front line of it."

The days' co-organizer, William Ballen of the Berkshire County Superintendents Association, said that during last year's event, Daily presented a similar workshop regarding issues of anxiety.

"Maybe 30, 40 people participated. The fact that more than 100 registered this year shows how important this topic is," Ballen said.

As a counselor and consultant, Daily's work is focused on children, trauma, and the study of the research and metrics of what the Centers for Disease Control and Prevention refers to as Adverse Childhood Experiences or ACEs.

Years ago, Ballen said, educators were expressing concerns about mental health issues and adverse behaviors in the classroom.

Despite the red flags, budget cuts were made across the board for positions like school counselors.

"Now, [ACEs are] affecting the academic part, so it matters," he said.

Despite airing a hint of cynicism about past decision-making in schools, Ballen said there is now a more authentic effort to address the effects of childhood trauma in the classroom and training teachers to understand the root causes.

More than two decades of research in the field has found that these experiences in adolescence can cast a shadow into adulthood, with effects ranging from obesity and substance abuse to heart disease and suicide attempts.

The more factors a person faces, the more likely they are do harm. Research shows that people with six or more ACEs have died nearly 20 years earlier, on average, than those living without ACEs.

School personnel are working to help prevent the effects of these risk factors by creating trauma-informed and trauma-responsive environments. They also are integrating supports into their classrooms, like practicing yoga, kindness and teaching strategies for resilience.

Asked if teacher training programs like this are helpful, a group of educators from the Southern Berkshire Regional School District answered with a resounding yes.

"Yes, definitely," said Carrie Mead, a registered behavior technician whose role was created in response to needs in her district. "This brings us together to talk and find out what's working and what's not working to help our kids."

"You're going to hear more and more about social-emotional issues going on in our county," said Karen Muir, a high school special education paraprofessional.

"Now, if a certain thing happens, it makes you think more about how you would handle it," said Belinda Twing, a kindergarten paraprofessional.

Daily spent a part of the session talking about the neurobiological effects, including how responses to trauma become toxic to the brain and human functioning. That is why trauma cannot be resolved by telling a child to "calm down," she said.

Instead, it's better to pause, help the child take a deep breath and then ask, "Are you OK? What happened to you?"

Easier said than done, of course, Daily said. But she encouraged educators to trust the science and data.

"You can teach kids coping skills all day long, but it's not going to work when they're not connecting to their neocortex," Daily said.

Changing a mindset and approach takes patience, education and practice.

"You offer a child with a runny nose a tissue," she said. "You don't scold them for having a cold."