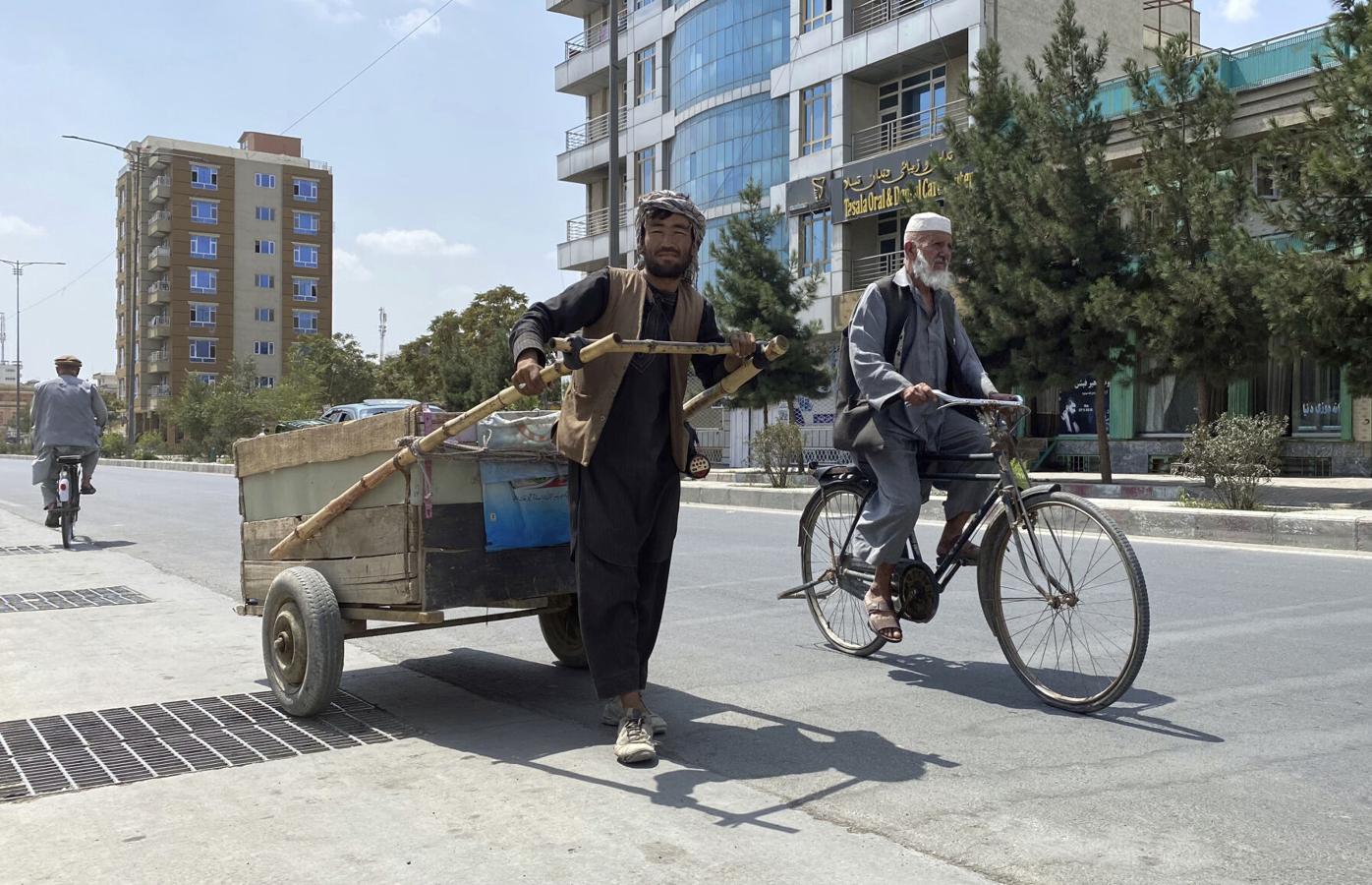 Sal Mohammad, 25, an Afghan man who gathers pieces of iron from the street to sell for scrap, pushes his handcart in Kabul, Afghanistan, Tuesday, Aug. 31, 2021. 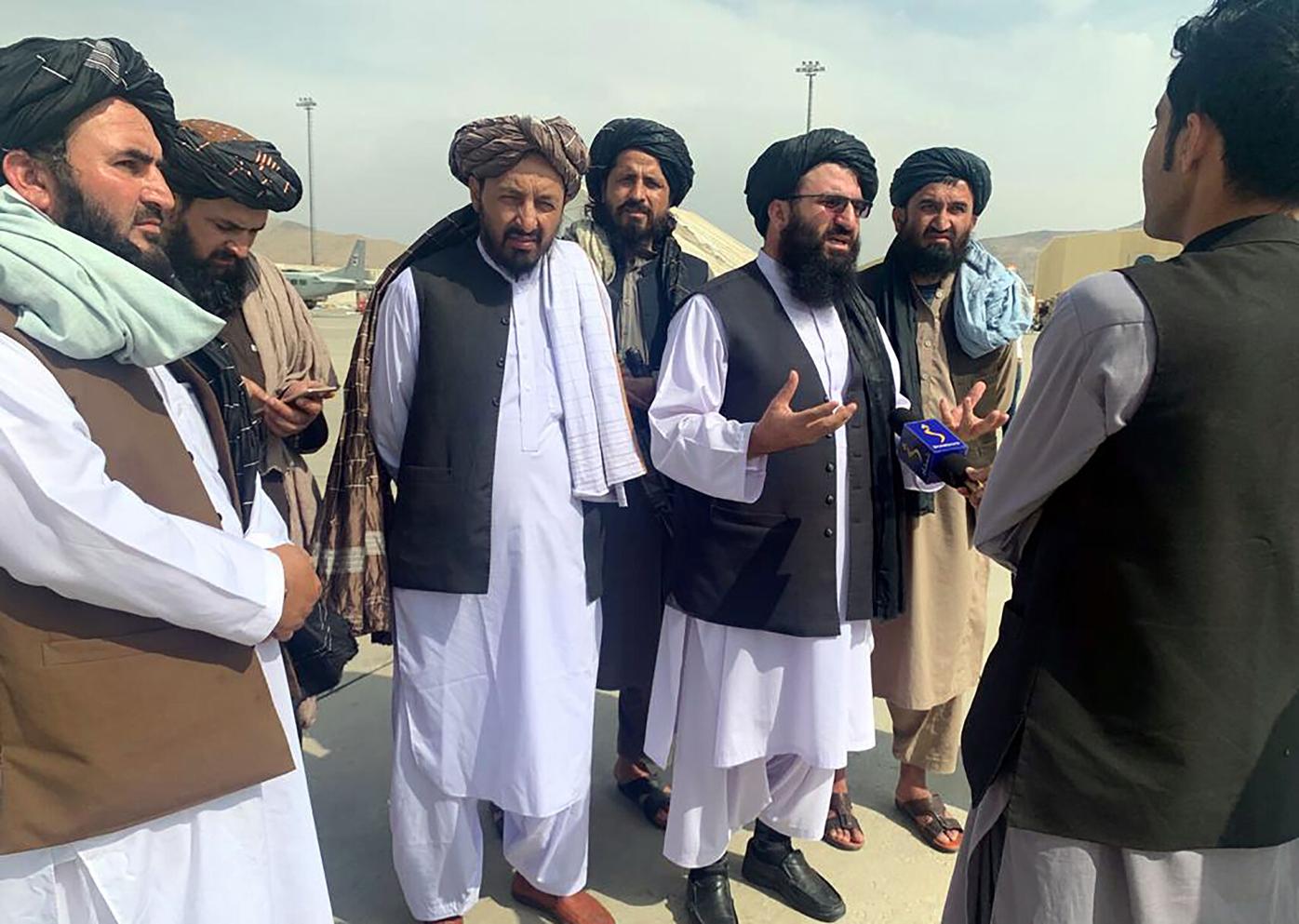 Taliban officials are interviewed by journalists inside the Hamid Karzai International Airport after the U.S. withdrawal in Kabul, Afghanistan, Tuesday, Aug. 31, 2021. The Taliban were in full control of Kabul's international airport on Tuesday, after the last U.S. plane left its runway, marking the end of America's longest war.

Sal Mohammad, 25, an Afghan man who gathers pieces of iron from the street to sell for scrap, pushes his handcart in Kabul, Afghanistan, Tuesday, Aug. 31, 2021.

Taliban officials are interviewed by journalists inside the Hamid Karzai International Airport after the U.S. withdrawal in Kabul, Afghanistan, Tuesday, Aug. 31, 2021. The Taliban were in full control of Kabul's international airport on Tuesday, after the last U.S. plane left its runway, marking the end of America's longest war.

KABUL, Afghanistan — Afghanistan’s new Taliban rulers face tough economic and security challenges as they step back into power in a country that is vastly different from the one they left 20 years ago.

When they last ruled in the late 1990s, Afghanistan was a poor agricultural nation, and the Taliban were preoccupied with imposing their harsh brand of Islam on an already deeply traditional and largely compliant population.

This time, they’re inheriting a more developed society with a small, educated middle class, but also an economy that has been devastated by war and corruption. Even before the Taliban overran Kabul on Aug. 15, the jobless rate was more than 30% and more than half of Afghans lived in poverty, despite two decades of U.S. involvement and billions of dollars in aid.

The Taliban have sought to reassure Afghans that they’ve changed from 1996, when they ruled with a heavy hand. Men had to grow beards and women had to wear the all-encompassing burqa. Girls were denied education and entertainment like music and television were shunned.

That past haunts many Afghans, and there is an underlying sense of fear that the Taliban of old lurk below the surface of the country’s new rulers. It’s keeping many people away from returning to their jobs, despite assurances from the Taliban, and it has prompted thousands to seek a future outside Afghanistan.

“The Taliban’s greatest challenge is to ... embrace others in governing Afghanistan,” said Torek Farhadi, a former adviser to the toppled Western-backed government.

“They feel they have a military victory and it might seem strange for their ranks that they now have to gift positions of power to others,” Farhadi said.

But, he added, a new government can only succeed if all Afghans, including women, can feel represented.

Several of the Taliban leaders who are now in charge in Kabul were part of the harsher regime of the 1990s, but they appear to have changed during their years in exile.

In 1996, Mullah Abdul Ghani Baradar barely wanted to travel to Kabul, content to stay in the southern provincial town of Kandahar. But in recent years, he has emerged as the top political negotiator, living in Qatar, the Gulf Arab nation that hosted a Taliban political office. Baradar has stood beside high-level Russian, Chinese and even U.S. political leaders.

Today’s Taliban have been conciliatory, urging former opponents to return to the country and promising not to exact revenge.

Their first big test is the formation of a new government. They have promised it will include non-Taliban figures, but it’s not clear if they are genuinely willing to share power.

An inclusive government could go far in slowing a mass exodus of Afghans, particularly the young and educated, and persuading the international community to keep sending desperately needed aid.

The Taliban have conflicting demands and constituencies to please. Even among the leaders, there are contradictory views of how to govern. In addition, Afghanistan’s tribal elders are another powerful group that can’t be ignored.

Then there are the thousands of fighters whose formative years have been spent on the battlefield and who are imbued with a sense of victory over a superpower. It’s heady stuff for many of the young fighters, and convincing them that compromise is for the common good may be difficult, if not impossible.

In the past, groups of Taliban fighters who felt the movement had betrayed its original hard-line beliefs defected to the Islamic State group, now a major security threat in the country. Last week, an IS suicide bomber blew himself up outside Kabul’s airport, killing 169 Afghans and 13 U.S. service members and disrupting the Taliban’s efforts to facilitate a massive U.S. airlift.

Time also is not on the side of the Taliban.

The economy has been in the doldrums for years. If peace comes to Afghanistan, its citizens will increase their demands for economic relief — a near impossibility if the international community, which had funded 80% of former President Ashraf Ghani’s government, withdraws its support.

A new government must deliver quickly and ease the economic crisis, said Michael Kugelman, an analyst at the Wilson Center, a U.S.-based think tank.

If it fails, “you have to start contemplating the possibility of large-scale protests against the Taliban that would clearly represent a major challenge to the Taliban as it attempts to consolidate its power,” he said.

But how far the Taliban are willing to bend to ease international concerns, while staying true to their own set of beliefs, could further widen divisions among the leadership, particularly those with more rigid ideology.

Farhadi said there is a reservoir of expertise among Afghanistan’s expatriates on which the Taliban could draw, but much rests on the face of the new government.

“You have a regime that doesn’t have any experience dealing with policy at a moment when you have a major policy crisis, compounded by the fact that the international community is going to cut off access to funds for this Taliban government,” he said.

“And as always, it’s the people, the Afghan people, who will suffer the most,” he added.